Well, it’s about over. Today is the last day of our Ohio Gypsy Journal Rally, and after coffee and donuts this morning, and a last round of hugs and goodbyes, most of the attendees will be leaving the Mercer County Fairgrounds here in Celina. That is, they will if they can get out of the mud hole that much of the fairgrounds has turned into.

Day after day of constant rain has made the ground so soft that it squishes underfoot when you walk across it, so I can only imagine what will happen when people start moving heavy RVs across it. If they can get moving and keep moving, they should be okay, but if they start spinning their wheels, or stop before they get onto pavement, they may be sitting right where they sink until we can get to them with a tractor to pull them out.

In spite of all of the rain and mud, everybody seems to have had a good time at the rally, and the feedback we have received, both verbally and on the rally feedback forms, has been very positive.

Yesterday afternoon we snuck out a few minutes early to go to dinner with Bob and Clara Lee, and Clara’s sister Annie. These three fun octogenarians are some of the sweetest people we have ever known. Anyone who knows me knows that I love to have fun, and I’ll never be politically correct. So the fact that I constantly referred to Clara and Annie as my Chinese mail order brides when I was on stage got a lot of laughs, and 81 year old Clara only added to it when she declared that I was her sugar daddy! 🙂 We treasure all three of them, and look forward to seeing them again at our Arizona rally next March.

We got back to the fairgrounds just in time to carry the last of the door prizes into the main hall in the pouring rain, and folks started slogging their way through the puddles to get seated. The door prizes are always a popular part of the evening events, and especially on the last evening, when we give away our Grand Prize. And yesterday, we actually had three Grand Prizes! So you know we had a crowd, in spite of the weather! 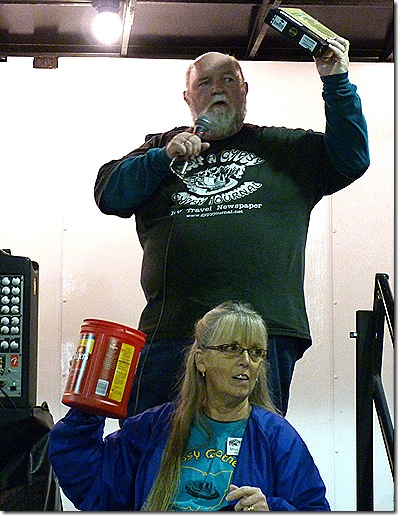 We had some nice smaller prizes to give away, and then all of the tickets were put back into the pot for the final three items. The first to go was an Amazon Kindle e-book reader, and the lucky winner was Judy McKinney, one half of our musical entertainment, the McKinney Washtub Two, with her husband Whitt. The next Grand Prize was a free admission for two people and one RV at any future Gypsy Journal rally, and that went to Bruce and Linda Fay.

And then came the one everybody was waiting for, a Sea Eagle 370 Sport kayak donated by Tim and Crystal Ryerson, owners of Inflatable Boats 4 Less. There sure were a lot of folks sitting on the edge of their chairs when I pulled that ticket, and called out the winner’s name. Rick Rousseau and his wife Kathy were thrilled to be the winners, and can’t wait to get it into the water. Here is a photo of myself and Terry with our Grand Prizes winners. From left to right, we have yours truly, Linda Fay, Judy McKinney, Miss Terry, Kathy, and Rick Rousseau. 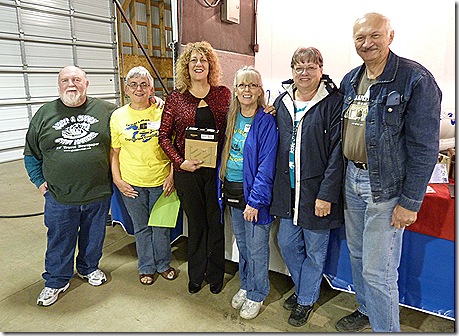 And here are Kathy and Rick, posing with their brand new boat. With all of the rain we have had here, they shouldn’t have far to go to find a place to paddle it! 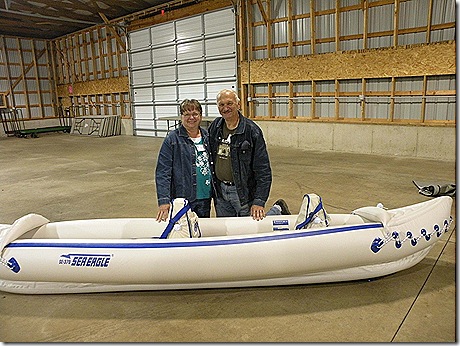 After the door prize drawings, Whitt and Judy took to the stage and spent an hour or so playing some fun songs and getting our toes tapping. 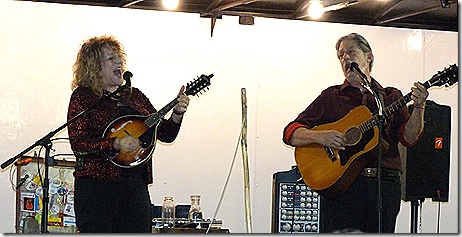 This morning we will say goodbye to those who are leaving, and I imagine I’ll spend a lot of time trying to help people get out. Quite a few folks will be staying over until things dry out. The good news is that, starting tomorrow, the rain is supposed to end and we should have several clear days. Timing is everything. 🙂

Thought For The Day – Ambition is a poor excuse for not having enough sense to be lazy.