When we woke up yesterday, the sky was looking pretty nasty, and the weather report said there was a good chance of thunderstorms. We decided that it would not be a good day to be kayaking. Rocky suggested that we visit the Gerald R. Ford Presidential Museum in nearby Grand Rapids, and that sounded like a great way to spend a Sunday, so off we went to check it out.

We have been to several Presidential homes and gravesites, and even to President Truman’s Little White House in Key West, Florida. But we found this one especially interesting, because President Ford took office when we were young adults, and we remembered (and lived through) many of the events covered at the museum. 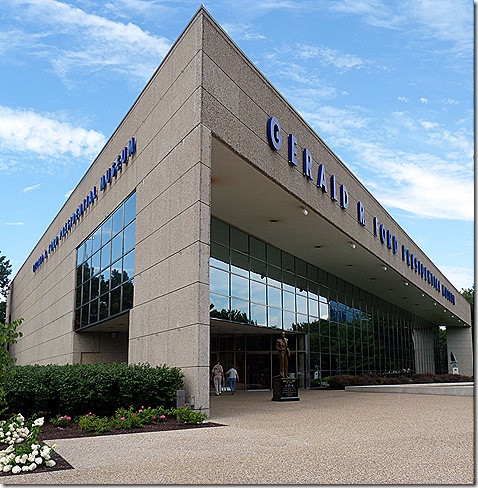 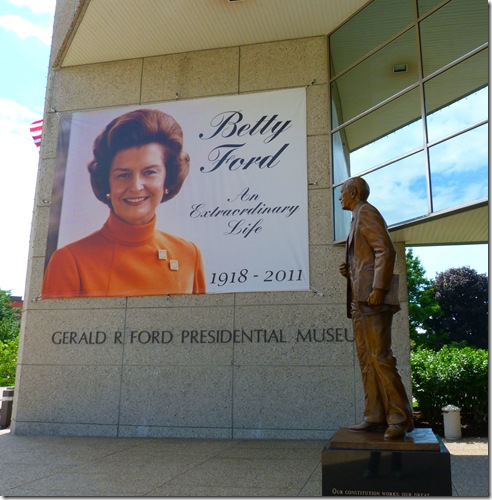 Raised in Grand Rapids, Gerald R. Ford was well known and loved by his constituents, who elected him to the House of Representatives for twenty-five years, from 1949 to 1973. During the fall of the Nixon White House, Ford was a chosen to succeed Spiro Agnew, who resigned his role as Vice President in December, 1973. When President Nixon resigned on August 9, 1974, Gerald R. Ford became President, giving him the distinction of being the only person to assume the vice-presidency and the presidency without having been elected to either office.

Though not elected by the people, Ford knew he had a responsibility to unite the nation, which was reeling from the Watergate scandal, and deeply divided by our involvement in the long and unpopular war in Vietnam. By the time he left office, upon the inauguration of Jimmy Carter in 1977, he had made great strides to accomplish his mission.

The Grand Rapids museum has displays on Ford’s childhood, wartime service as an officer on an aircraft carrier in the South Pacific, his political career, and presidency.

Exhibits include a re-creation of the Oval Office as it was during Ford’s time, with many items that decorated the office during his presidency. 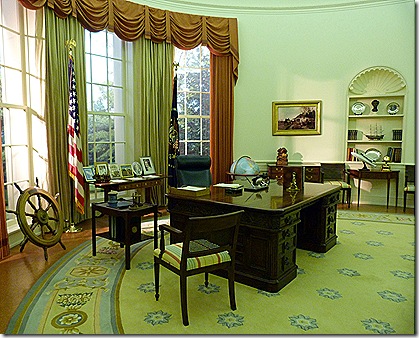 A display on Ford’s role in ending the Vietnam War includes the front half of a Huey helicopter, and the actual steps from the American Embassy in Saigon, which hundreds of American military personnel and South Vietnamese climbed to be airlifted off the roof during the fall of Saigon. I still vividly remember scenes of crews pushing helicopters off the decks of ships to make room for more people, and pilots deliberately crashing their choppers into the sea near ships to escape the advancing communist troops. 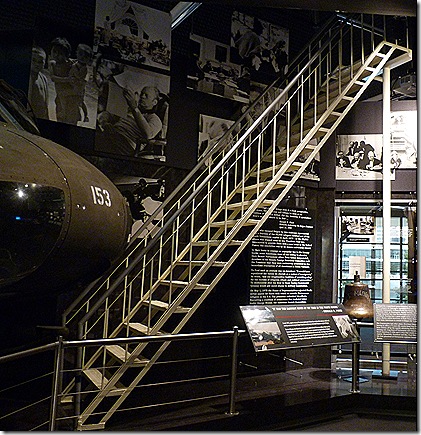 Many of the decisions President Ford made were controversial, including his pardoning of Richard M. Nixon, as well as his decision to allow those who fled the country to avoid the draft to return home. One exhibit includes medals that Vietnam veterans sent to the president in protest of his decisions. But he truly believed these actions were needed to unify the nation, and looking back from the perspective of over 35 years, I think at least some of us who disagreed with him at that time have mellowed.

One grim reminder of just how dangerous the president’s job can be is the Colt. 45 semi-automatic pistol that Charles Manson follower Lynette “Squeaky” Fromme tried to assassinate President Ford with, on September 5, 1975. 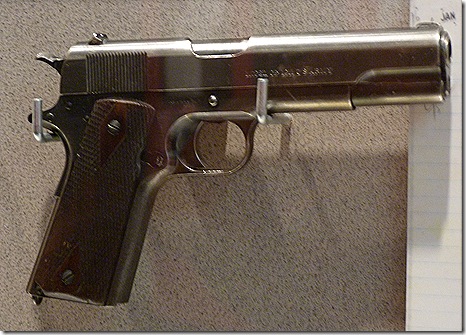 Gerald R. Ford died on December 26, 2006, at his retirement home in Rancho Mirage, California. His wife, Betty Ford, died on July 8, 2011. The Fords, who were dedicated to each other throughout their married lives, are buried on the grounds of the museum in Grand Rapids. 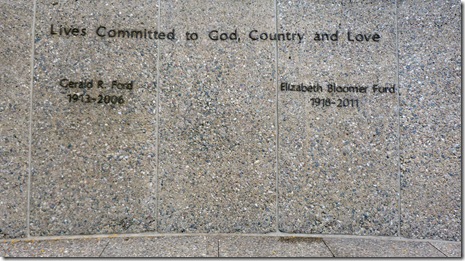 I’m glad we spent the day at the museum. I came away with a better understanding of President Ford, and a lot of respect for his integrity and his long service to our nation. I couldn’t help but feel that maybe we need another man like him to reunite our country today.

Thought For The Day – Concern yourself with not what is right and what is wrong, but with what is important.