Yesterday morning we slept in, catching up from the 1350 long miles we have covered since we left Bremerton, Washington on Monday. When we finally did get up, we spent an hour or so checking e-mail and reading a couple of our favorite blogs. It was good to just play lazy and not have to do anything.

In the early afternoon, we walked down to Frontier Village, which is a collection of historic buildings that have been moved to Jamestown from all over the state, including a barber shop, saloon, one room schoolhouse, church, and several others. 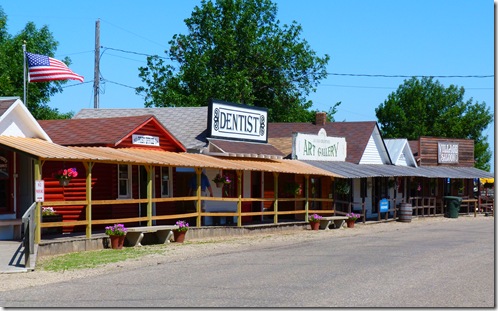 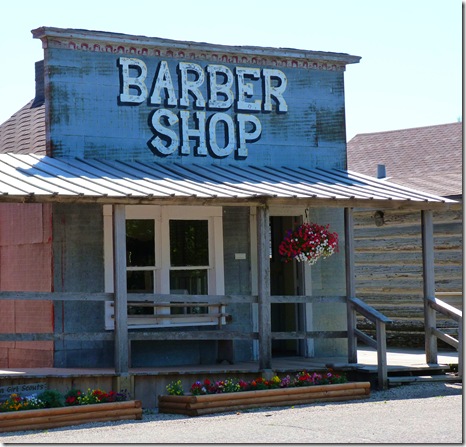 Frontier Village is also the home of the National Buffalo Museum, and we spent a while touring the museum, checking out the many displays; everything from a buffalo robe to Native American artifacts, and items from the days of the buffalo hunters. The museum even has a full size mounted buffalo, and an Indian tipi on display! 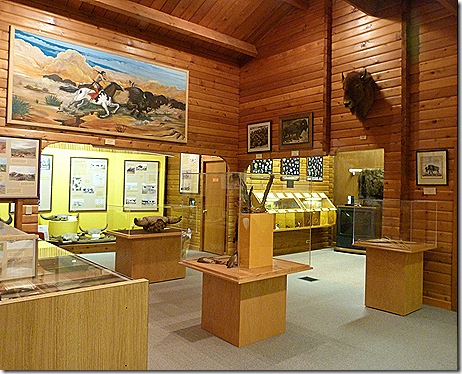 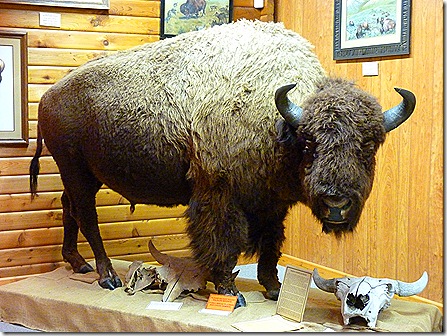 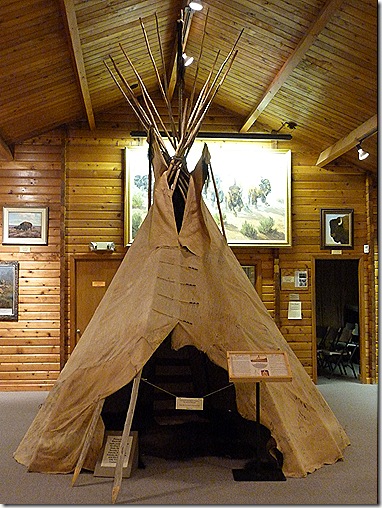 The museum also has its own buffalo herd, which live in a huge compound. Included in the herd is White Cloud, an albino buffalo who was born in 1996, and has since given birth to several calves, including one albino like herself. Another white calf was born to one of the herd’s brown buffalo. White buffalo have special significance to Native American culture, and people come from all over the country to see these unique animals. 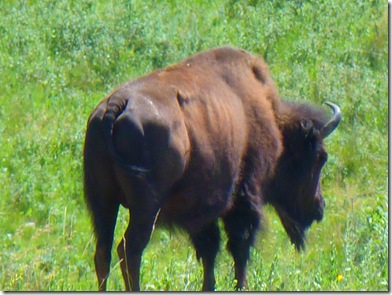 Since they are very sensitive to sunlight, not every visitor gets to see the white buffalo. During most of the day, they stay in the shade of the trees in their compound. But we were very lucky, because we saw one of them grazing, and even though it was quite a distance away, Miss Terry was able to get some photos by using her camera at maximum zoom. 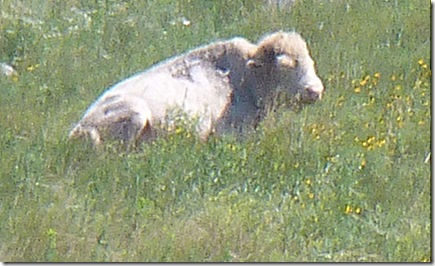 After we toured Frontier Village and the museum, we went back to our motorhome to get some orders ready to mail out, and then ran to the post office. Then we drove to an RV park a couple of miles west of town to drop off a bundle of sample issues of the Gypsy Journal, and then to WalMart for a few things.

When we left WalMart, we stopped for dinner at a pizza buffet that had been recommended by several people. While the food was pretty good, we had to deal with a bunch of boys from a baseball team from Dickinson, who are in town for a baseball tournament. I know boys are full of energy, and they were no doubt pumped up by their excursion to the big city of Jamestown, but these kids were flat out rude. They continually pushed themselves in front of other people at the buffet line, reached in and grabbed things with their hands, and twice I saw them drop food on the floor, and just kick it away or walk away without picking it up. While this was happening, two adult men, whom I assume were their coaches or chaperones, ignored their behavior and the dirty looks other diners were shooting their way.

After we finished eating, we drove back to the Buffalo Museum, where Terry wanted to buy some buffalo meat, which is much better than beef, with less cholesterol, lower fat, and tastes much better. About the time she made her selections, the door burst open, and the same crowd of kids rushed inside, talking loudly, grabbing everything off the shelves in the gift shop, and then they barged right past the sign saying admission was required to tour the museum, without paying. The young lady working at the counter had to excuse herself and go chase them down, telling them they had not paid. They came back out, complaining about “that bitchy girl” and again, the man who was “in charge” of them just ignored their actions. They took off, in search of somebody else to offend, and the young lady returned to finish our order, and commented on what jerks they had been.

Now, I’ll admit that even as a kid, I was never good at sports. But isn’t part of the idea of the whole thing to teach young people to be good citizens? And aren’t their coaches and other adults associated with team activities supposed to be role models? Is ignoring the way they act up, and not correcting their behavior, what a role model is supposed to do?

As of late last night the wind had picked up quite a bit, and the weather report was still calling for strong storms in this area overnight and much of today. So I think we may just stay here another day, and leave on Sunday, when things are supposed to be clear and calm. There are several geocaches within a mile or so of where we are parked, including one right here in the campground, and a couple at Frontier Village. So if the weather cooperates, we may try to hunt them down.

Thought For The Day – The cardiologist’s diet; if it tastes good spit it out.