Nick's Blog » The Eagles Of Seabeck

One of my favorite singers was the late, great John Denver, and yesterday I was reminded of the line in his classic song Rocky Mountain High “I know he’d be a poorer man, if he never saw an eagle fly” when we went to the little community of Seabeck to watch the eagles that come to the shoreline of Hood Canal here to hunt the mudflats at low tide.

Seabeck was first settled when a sawmill was built on the edge of Seabeck Bay in 1856, and by 1880 it was a booming community of over 600 people. Seabeck flourished as a lumber and shipbuilding center, but by 1886, the sawmill had burned down, and the community began to decline. Today Seabeck has a few stores, but is mostly a residential community, with handsome houses overlooking Hood Canal, surrounded by deep green forests. We saw several deer feeding alongside the road, and Miss Terry’s camera was clicking away. 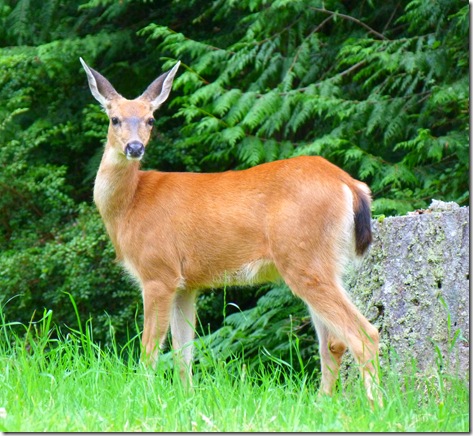 The best eagle viewing spot is at the bridge over Big Beef Harbor, where there are gravel parking areas on the shoulder of the road. At low tide, the shallow water “harbor” is no more than a big mud puddle, and attracts huge numbers of birds that feed on clams, oysters, and fish. When we arrived, the first thing we spotted was this crane coming in for a landing. 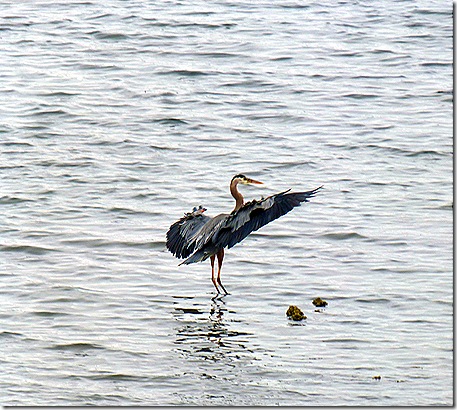 Nearby, these geese were marching across the mud in military formation, off to search for dinner. 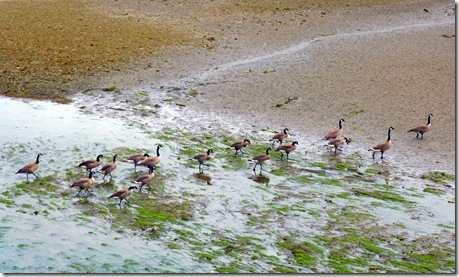 And then I looked up, and saw the first eagle of the day flying overhead. 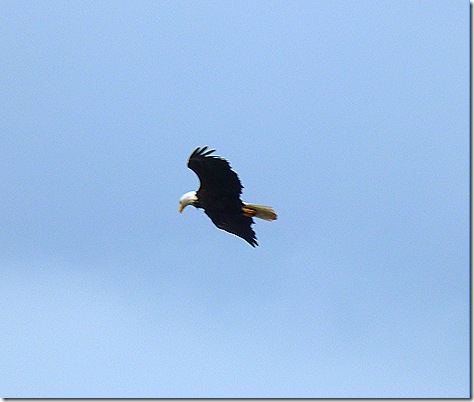 And then another one, and then they started flying in, sometimes alone, sometimes in pairs. 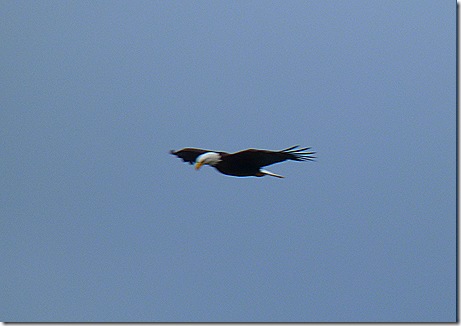 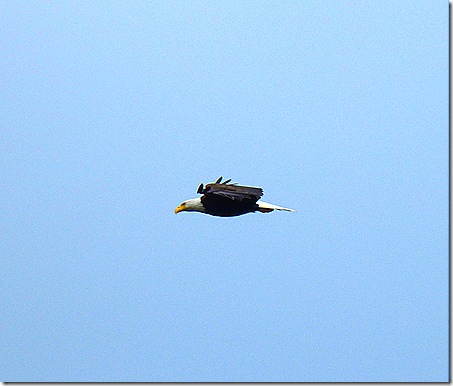 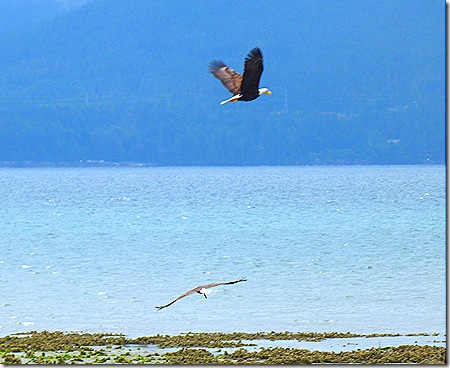 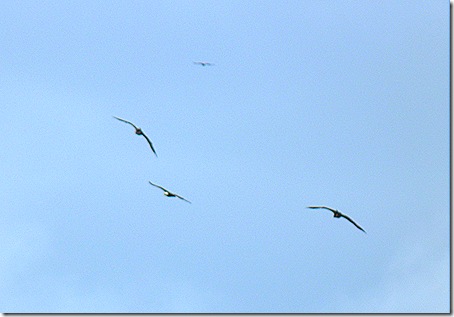 It was a cold, windy day, making photography hard, especially with the swift flying eagles. But Miss Terry stood there shooting picture after picture, until her fingers were numb and the wind had tears running down her cheeks. Most of the time, the birds were high overhand, but occasionally one would swoop down to water level and grab a small fish. 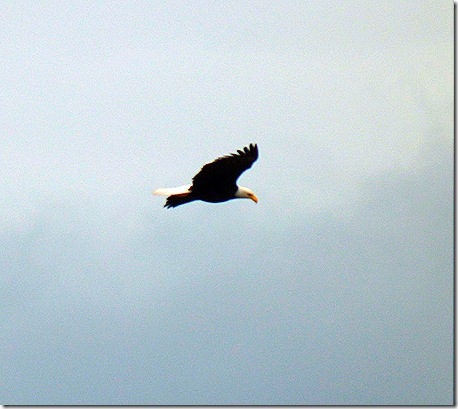 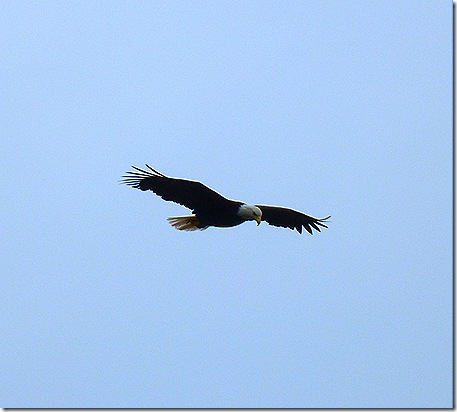 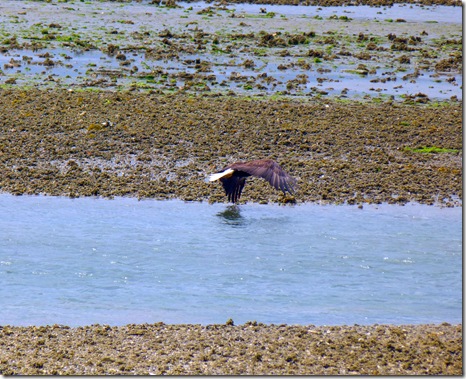 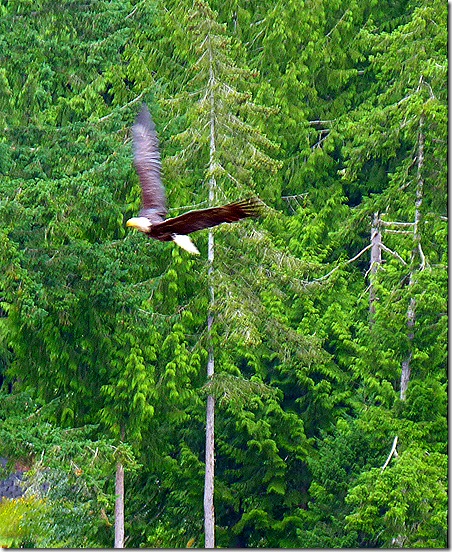 On the inland side of the bay, several young eagles that didn’t have the typical white heads yet, were working the mudflats. 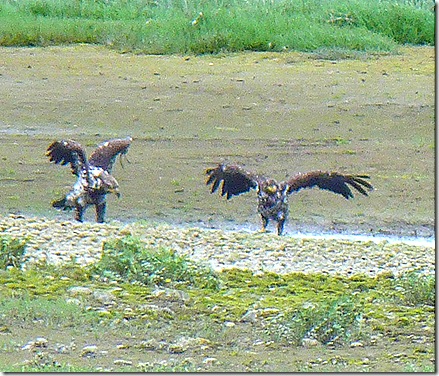 When this mature bald eagle showed up, there was no question who was top dog… or top eagle, I guess. The juveniles moved aside and let the big guy (or girl) settle in. 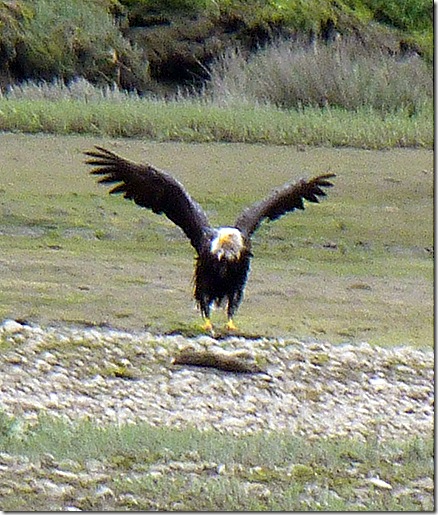 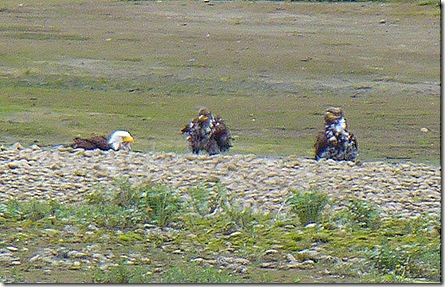 We laughed as we watched the eagle bathe, throwing up water and then shaking its wings, then repeating it again. By the time it was finished, it looked like it was really having a bad hair day. 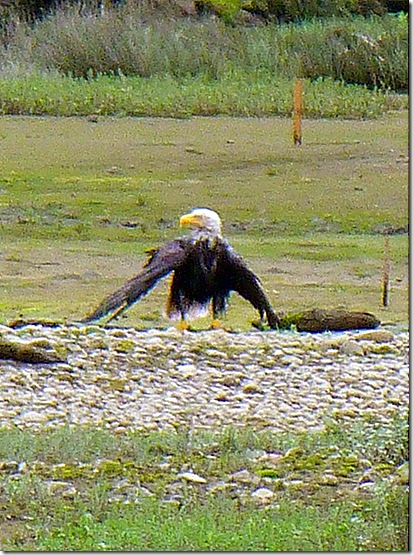 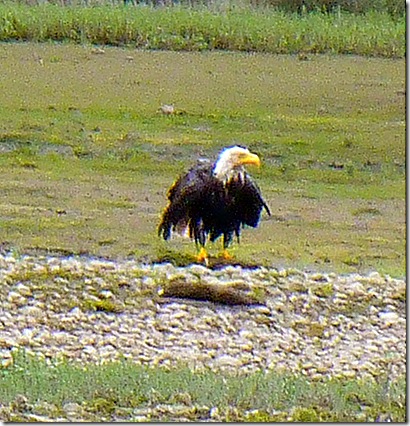 Terry was disappointed that some of the photos were not as sharp as she had hoped, but shooting at maximum zoom, in the wind, I think she did a darned good job. And we’ll never forget the sight of seeing so many eagles flying wild and free right above us.

If you are in the area and want to see this great natural show, the GPS coordinates for the parking area are N 47 39.336, W122 47.166. There isn’t room for a large motorhome to pull off the road safely, but a Class C, B van, or tow vehicle would have no problems.

After we left the eagles, we stopped in Silverdale for a delicious pizza at a little place called Mattioli Pizzeria, which rates right up there with some of the best we’ve had anywhere. 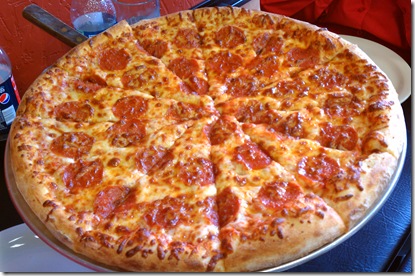 By the time we had finished our dinner, we finally warmed up, after standing alongside the bay in the cold wind for so long. We stopped at Barnes & Noble to get our bookstore fix, and then at Best Buy, where I bought an inexpensive nylon case for my Kindle. Then it was home, where I wrote a new self-publishing blog post titled Butt Glue. Trust me, it’s not as bad as it sounds.

Thought For The Day – Just about the time you start to make ends meet, they move the ends.

7 Responses to “The Eagles Of Seabeck”