We awoke to rain yesterday morning, and it continued to come down steadily as we checked our favorite daily blogs, answered a few e-mails, and checked the news on the internet to see who we’re at war with this week, how bad the deficit is today, and if we’ve won the war on drugs. No good news there, so we decided that we probably should stop procrastinating, and just go ahead and get ready to hit the road.

We got lucky, and the rain stopped while we pulled out of our campsite at the Ojibwa Casino and got the Explorer hooked up, did a light check, and started driving east on State Route 28. A few minutes after we started out, it began raining again, and kept up most of the day. But Miss Terry was still able to get a few good pictures along the way, including these cattails we saw alongside the road.

For the first part of our trip, we followed the Lake Superior shore, where there were several pullouts and viewpoints. 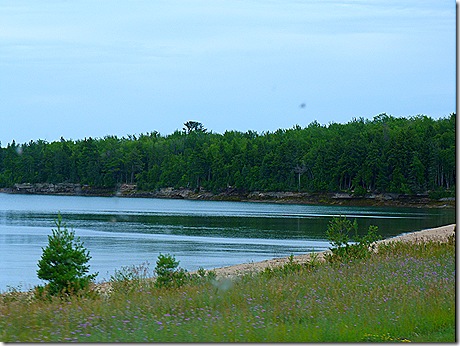 If anybody ever told you Michigan was flat, they lied. We went up and down several pretty steep hills. They were nothing compared to the Rocky Mountains we crossed a week or so ago, but I sure wouldn’t want to tackle them in the wintertime! 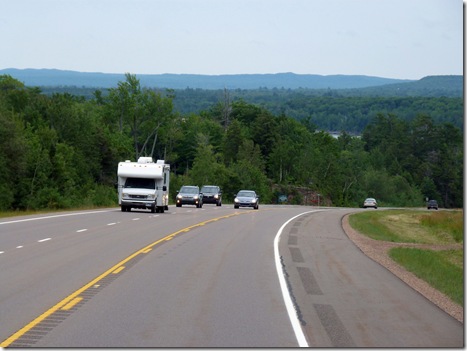 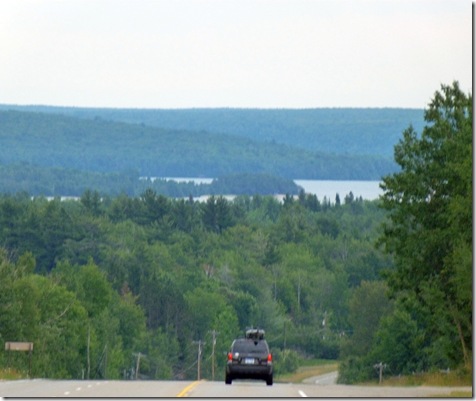 There was a fair amount of traffic, including quite a few RVs. 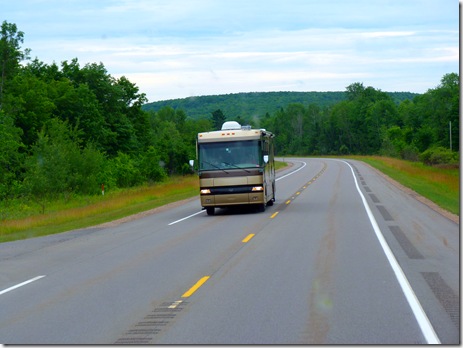 Going through one little town, we spotted this mobile sauna that you can rent. What a clever idea! 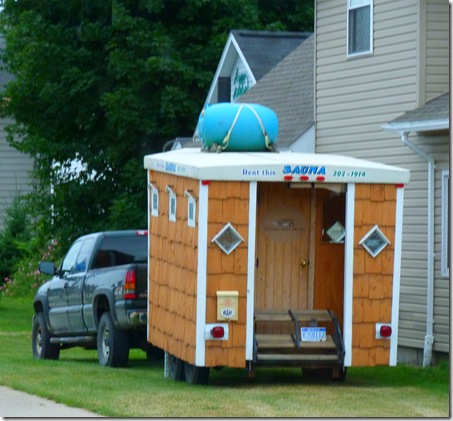 We wanted to stop at Pictured Rocks National Lakeshore, but it was raining hard when we came through Munising, so we decided that would have to wait for another time. We poked along until we got to Interstate 75, and took it north a few miles to Sault Ste Marie, often called simply Soo City.

There are two exits to get off the highway in Sault Ste Marie, so of course, I chose the wrong one, depositing us downtown, where there was a lot of traffic and road construction, and the street we needed to take was closed. After a little trial and error, we managed to find our destination, arriving at the Elks lodge about 3 p.m., with 155 miles behind us for the day.

The Elks lodge has four RV sites with 30/50 amp electric, water, and cable TV. The RV sites are on a little spit of land overlooking the St Marys River, a mile or two from the famous Soo Locks, where some 10,000 ships a year pass through on their way between Lake Superior and the lower Great Lakes. Here is the view out our front window, with Canada just across the river. There is both a wide angle and a zoom shot. 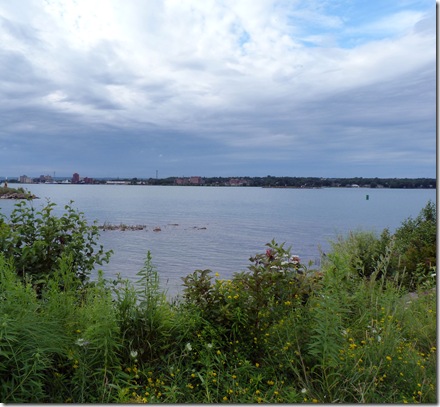 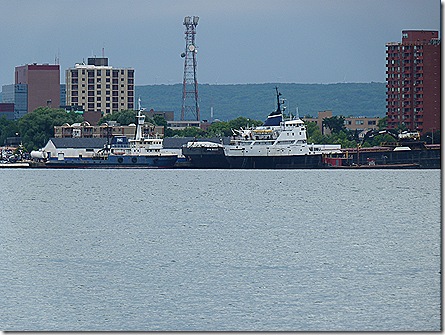 To put things in perspective, here is an Army Corps of Engineers aerial view of the Soo Locks, looking east. We are parked on the right side, about where the yellow mark is in this photo. 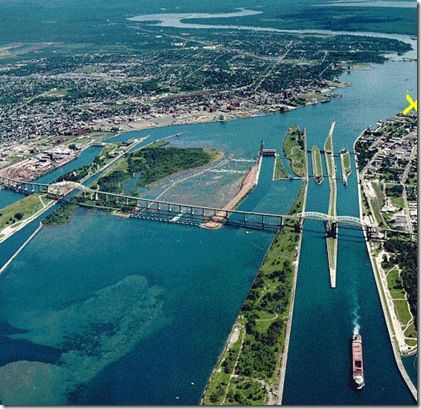 Ship watching is a favorite pastime around here, and we have a perfect spot to see them as they go by. During the afternoon and evening, five or six huge freighters went past, including the American Spirit, making its way toward the locks. Launched in 1978, the 1,000 foot long ship can carry 62,400 tons of cargo. 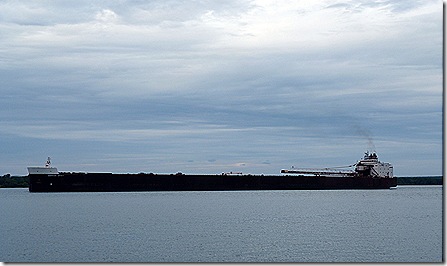 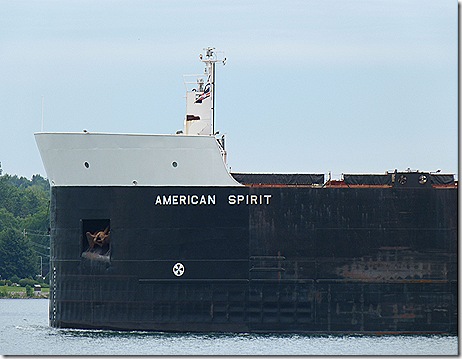 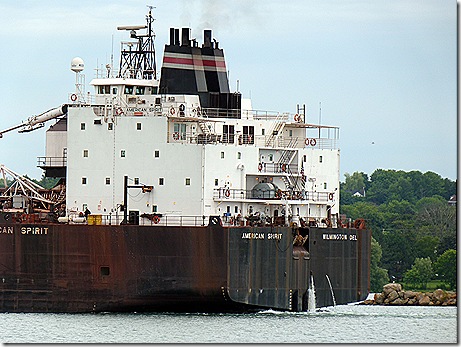 There are two other motorhomes parked here with us, though one is supposed to be pulling out today. Here are some of our other neighbors. And these Canadian geese are who supply the poo I mentioned above. A lot of poo! Do you have any idea how much a flock of geese can poop? I do, because it’s all over the place. I don’t think I’ll be walking around barefoot much while we’re here! 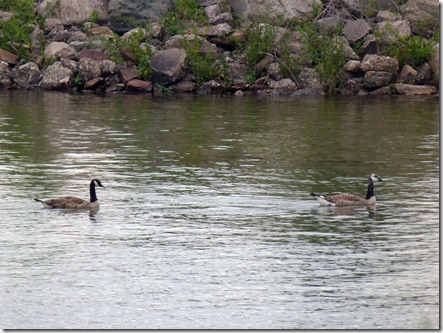 Once we were parked and hooked up, we ran out to get a bite to eat, stopped at WalMart for a few things, and came home to watch the ships and small pleasure craft go past. And to swat mosquitoes. Lots of mosquitoes! It didn’t take us long to decide to retreat inside, and watch the passing nautical parade from the comfort of our Winnebago.

We’ll be here a few days, exploring the local sights before we head south for Terry’s doctor appointment in Traverse City next week. Several readers have suggested we cross into Canada for some sightseeing, but we don’t have passports, and we won’t have enough time to see everything on this side of the border that we’d like to get to.

Thought For The Day – Every new day is another chance to change your life.