We had such a good time in Seattle on Wednesday, that when Jan White said she wanted to go back one more time, we quickly agreed! So yesterday was déjà vu time, as we boarded the ferry in Bremerton for the ride across Puget Sound to the Emerald City.

I’ve probably made this crossing close to 50 times over the years, but I still always get a thrill when I see the city’s skyline from the waterfront. 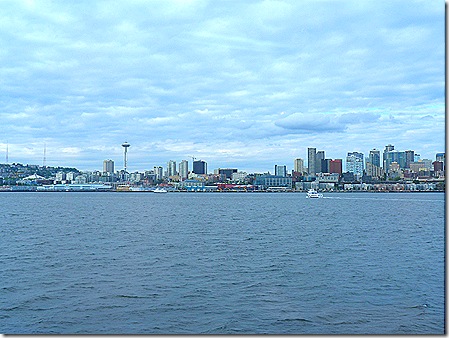 I bet the view from this seaplane was even better! 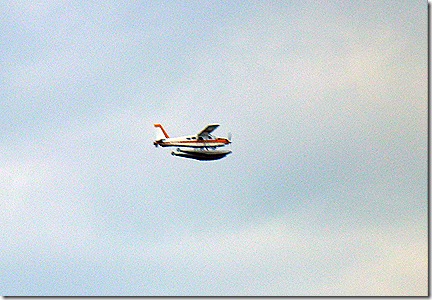 Unlike on our earlier trip, this time around we parted company with Greg and Jan when we got to town. They wanted to ride the Ducks, the amphibious World War II vehicles that take visitors on a tour of the city, and even out onto the water. Terry and I weren’t interested in the tour, but Terry really wanted to go back to Pike Place Market, and to a couple of shops she didn’t have time to completely explore last time around.

We stopped at a couple of kitchenware shops, and then back at Penzeys Spices, before we went to the Market. The place was busy on Wednesday, but yesterday it was an absolute madhouse. On the main level where the produce stalls and fish markets are, peep were packed in so tightly that you could not see anything before the crowd pushed you along with them.

After getting shoved, bumped, and nudged from every direction at once for the length of the Market, I felt like I had spent a week in a TSA line at the airport! We escaped downstairs, where it was a lot less crowded, and wandered through the shops there for a while. Then we went back upstairs and crossed 1st Street to check out the many small shops that faced the Market. It was a little less hectic, and Terry enjoyed shopping several little ethnic food shops.

While she did that, I watched some of the street performers. There was a young man who was juggling while he rode a unicycle, a fellow playing an accordion, and two pretty young girls clogging. I have seen a lot of clogging in Appalachia, but never in the Pacific Northwest before.

Eventually we wandered downhill to the Waterfront, where we were supposed to meet Greg and Jan at the Seattle Aquarium. We arrived a few minutes before Greg and Jan, and enjoyed just sitting on a park bench people watching, one of our favorite pastimes. You sure see some strange folks in the big city! 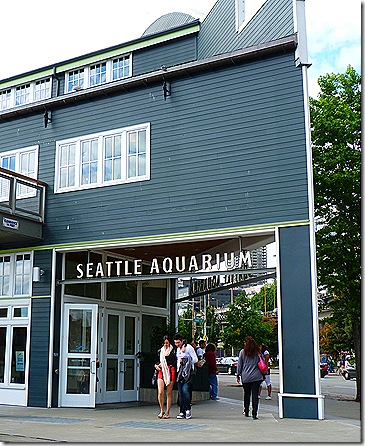 Greg and Jan treated us to dinner at Ivar’s Restaurant, and by the time we finished eating, it was time to walk to the ferry terminal for the trip home.

We passed this huge cargo ship headed out to sea, with containers stacked as much as six high. That’s a big load! 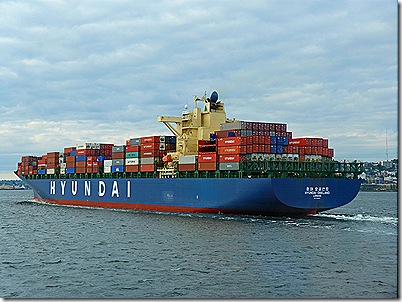 Back at the Elks Campground, we had a quiet evening, catching up on e-mail and relaxing after our busy day in the big city. I also posted a new Bad Nick Blog, about an incident I saw in Seattle that impressed me, titled The Balloon Girl. Check it out and leave a comment.

Thought For A Day – Think about the last five things that upset you, then ask yourself “In 50 years, how much will this matter?”