The strong wind had died down overnight, and since we had an easy driving day ahead of us, we slept in, then puttered around for a while, finally pulling out of North Park Campground in Dickinson just before noon, cruising east on Interstate 94. Traffic was light and we made good time, with only one potty stop at a rest area along the way.

Yesterday was a day for seeing big critters, and when it comes to larger than life animals, North Dakota is the place to be! We saw three of them in less than 200 miles. The first was just outside of New Salem, at Exit 127, where Salem Sue, the World’s Largest Holstein Cow, watches over the highway from a hill on the south side of the road. Sue stands 38 feet high, is 50 feet long, and weighs 12,000 ponds. That’s a lot of moo! 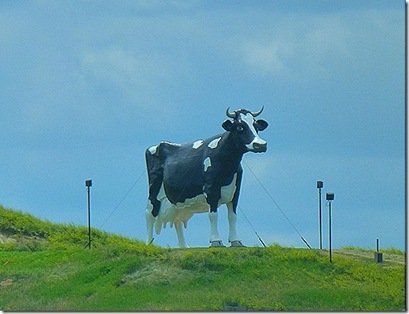 At Steele, Exit 200, Miss Terry spotted Sandy, the World’s Largest Sandhill Crane.  Sandy is 40 feet tall and weighs 4 1/2 tons. Steele is the county seat of Kidder County, which is known as one of the best birding destinations in North America. The Prairie Pothole Region of North Dakota is an area of glacial potholes located in the direct path of the migration flyway, making it a favorite spot for migratory nesting birds, including the Sandhill Crane. 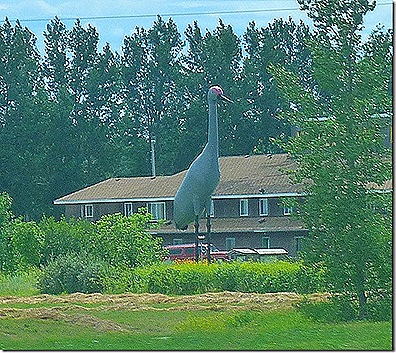 North Dakota has had a lot of flooding recently, and the further east we traveled, the more flooded fields we saw. 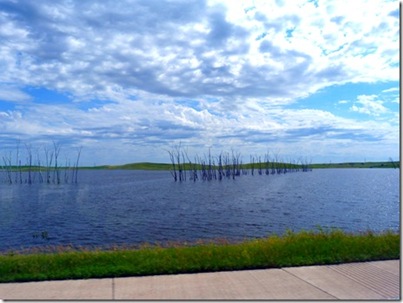 We crossed the Missouri River at Bismarck, and the water was high, creeping up on the edge of Keelboat-Steamboat park, just under the Interstate 94 bridge. 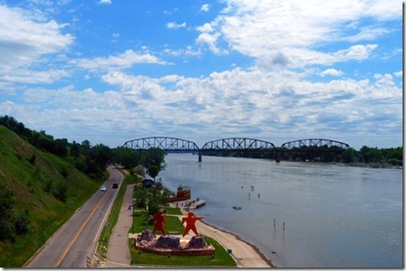 East of Bismarck, at about mile marker 223, the highway was reduced to one lane each way, and large water filled bladders were being used in the outside lanes in each direction to hold back floodwaters. Workers were operating pumps to move the water away from the pavement, and if the strong storms that are predicted for today and tomorrow develop, I think they will have their work cut out for them. 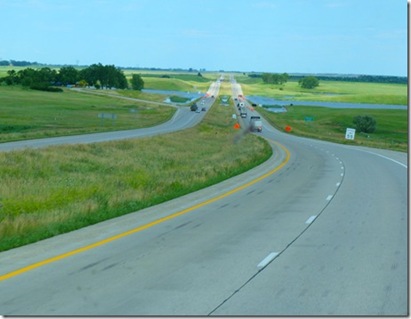 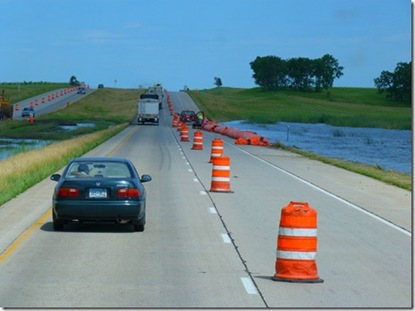 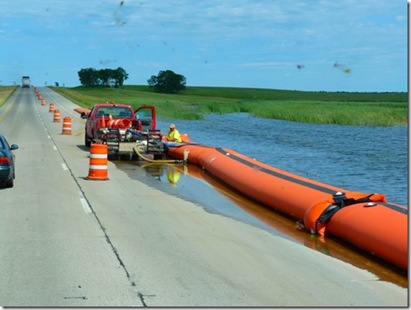 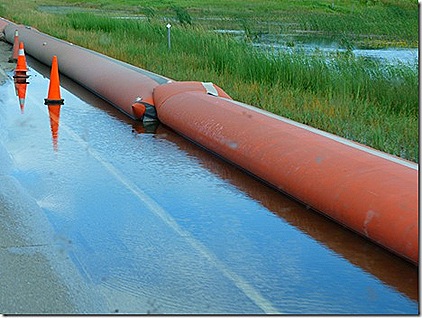 We arrived in Jamestown about 5 p.m. and pulled into Frontier Fort Campground, a Passport America affiliate. We covered 195 miles, our second easy driving day in a row. We’re trying to make up for the two marathon days before that, earlier in the week. We took a pull through 50 amp full hookup site, and though there were some trees, our Winegard Trav’ler automatic rooftop TV dish had no problem locking onto a signal.

As it turns out, Jamestown is the home of yet another giant animal, and it is just a short walk from the campground. The World’s Largest Buffalo was the first giant roadside animal sculpture built in North Dakota, and it is located at Frontier Village, a re-created Old West town just a few blocks from Exit 258. This big guy is 26 feet tall, 46 feet long, and weighs 60 tons. 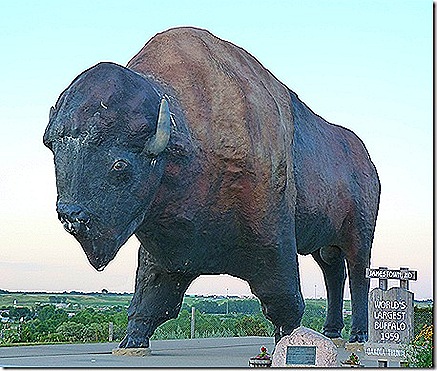 If you are a fan of western novels, you’ll be interested to learn that Jamestown was also the birthplace of Louis L’Amour, one of the best known authors of not only westerns, but also some excellent adventure novels.

We came to Jamestown to visit the National Buffalo Museum, which is also located at Frontier Village, and since we’ve been pushing it hard, we decided to stay on an extra day and catch our breath. There are some strong thunderstorms in the forecast, so we’d just as soon sit here and wait them out, than be on the road somewhere and run into bad weather.

Before I close, I want to share a technical tidbit I learned last night. A while back, the sound stopped working on my Garmin 465T trucker’s model GPS. The unit functioned just fine in every way, except that the voice directions and tones that alert me to upcoming road conditions had ceased to function. I tried all of the easy things – rebooting the GPS, checking to make sure the sound was turned up and not muted, resetting it to factory defaults, and even switching to one of the other voices from the standard American English. Without the sound function, the GPS was much less useful. I e-mailed an inquiry to Garmin’s technical folks, but before I could get a response, I did a Google search by typing in Garmin GPS No Sound. As it turns out, this is apparently something that happens with a lot of the Nuvi GPS models. The fix I found was actually pretty easy; unplug the GPS from external power, turn it off, and hold your finger down on the lower right corner of the screen. Then turn the GPS back on. A message appeared, asking if I wanted to delete all saved information. I chose yes (be aware that all of your saved Favorites will be lost), and the GPS restarted, and the sound was back. Hey, Nick fixed something! Let’s mark this day down on the calendar, so we can remember it! 🙂

Thought For The Day – If you’re not outraged, you’re not paying attention.