Since we don’t have full hookups here at the Bremerton Elks lodge campground, Miss Terry has not been able to use the washer/dryer combo in our motorhome for a couple of weeks now, so Wednesday we set off looking for a laundromat. We got onto a street we had not traveled yet, and as we topped a steep hill, we got a quick glimpse of a city skyline, that I was sure was Seattle. There was traffic behind us, and we were short on time, so we couldn’t stop or go back, but I was confused. Seattle is abut sixteen miles across Puget Sound, but the lower end of Bainbridge Island lies between the two.

After we finished the laundry, we had just enough time to drop our clothes off at home, and then we headed right back out, to visit friends in Olympia. When we returned to Bremerton it was after 11 p.m., but since  it was a clear night, I convinced Miss Terry to drive around looking for the same street, hoping to see the city lights at night, but we couldn’t find the right place.

I have heard that there are a few places on the shoreline of Michigan where, under the right conditions, you can see the skyline of Chicago, across Lake Michigan. I’ve never seen the phenomena myself, and some people I have asked about it have said it is an urban legend. So can you actually see Chicago from Michigan? I don’t know. Worse yet, I didn’t know if we actually saw Seattle, or was it just a phantom skyline we both imagined!

So yesterday we found Sylvan Way, the street we had been on the day before, and even though it was a gray, cloudy day, sure enough, in one spot just as we topped  a steep hill, there was the ghostly skyline of the Emerald City, barely visible in the clouds.

Here is the same picture, with the background lightened to make it a bit easier to see.

Apparently, the hill on Sylvan Way is just high enough to look over a low point on Bainbridge Island and across the Sound to the city. How cool is that? (Yeah, I know, it’s the little things in life that excite me the most.)

Once I knew that I wasn’t hallucinating about the skyline, back at home yesterday, I made some changes to the schedule for our Eastern Gypsy Journal Rally, adding several new seminars.

My buddy Dennis Hill, from the RV Driving School, will be doing several seminars on driving RVs, including one for ladies only, as well as a seminar on Preparing To Drive To Alaska. Dennis and his wife Carol will also be presenting one seminar together called Alaska – An RV Adventure. Check out their blog, Dennis & Carol’s RV Adventures, for some great pictures of their current Alaska trip. Here is a picture of Dennis, wearing his Gypsy Journal rally shirt, with Mount McKinley in the background. 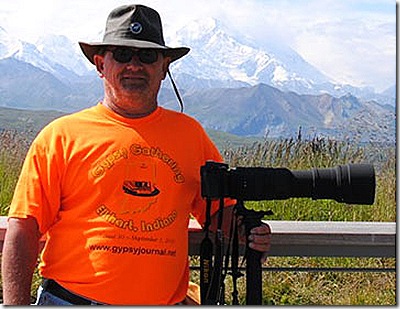 And if you like to shake a leg, Carol will also be doing a line dancing class at the rally! That lady sure can dance! 🙂 I have an updated rally schedule on the rally page; scroll to the bottom and check  it out. Keep in mind that I will be making changes and adding more seminars as we get closer to the rally dates.

With all of that done, I made a new post to my self-publishing blog, titled What Makes A Good Blog Post?

Speaking of publishing, my friend Kristian Alva has a brand new Young Adult novel out titled Dragon Stones, a fantasy that is available in both paperback and Kindle edition, and is the first book in the new Dragon Stone Saga series. If you have a teen reader in the family who loves tales of dragons and emperors, check out Kristian’s new book. I think they’ll like it.

Thought For The Day – Think twice about the bridges you burn. It’s much easier to set fire than it is to rebuild.