Yesterday I swatted mosquitoes with one hand while I unhooked our campground utilities with the other, and we pulled out of the Long Beach Thousand Trails a couple of minutes before 9 a.m. Greg and Jan had left a half hour or so earlier to get fuel, and were pulled over on the shoulder waiting for us when we turned onto U.S. Highway 101 and headed north toward Raymond, 45 miles away.

The road was mostly two lane, with a couple of passing zones, and it twisted and turned as it wound its way uphill and downhill. It definitely wasn’t a road where we were going to be traveling very fast in our big motorhomes! In a couple of places we saw deer feeding alongside the road, or in the lush meadows we passed. This is really beautiful country. 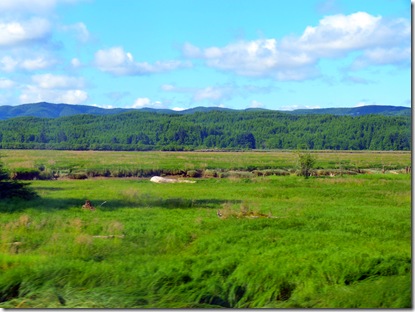 Much of our route followed the mudflats and shoreline of Willapa Bay, which is famous for its oysters. 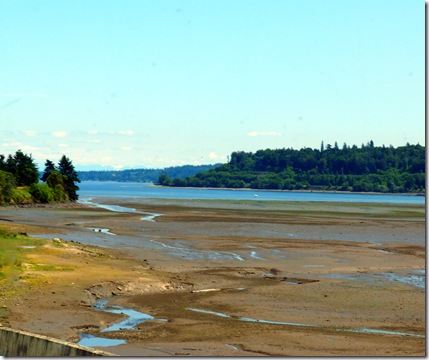 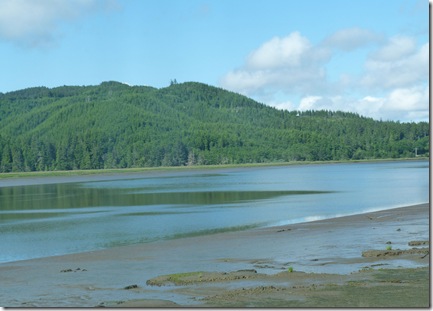 In several places, we passed wooden pilings from docks or canneries that disappeared long ago. 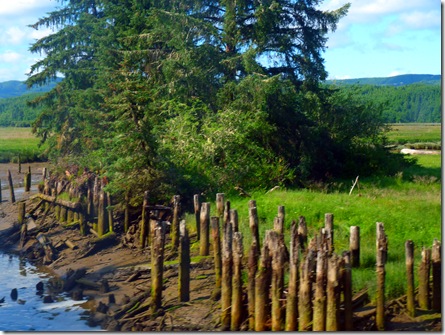 We even saw an oyster boat heading out to do its thing. 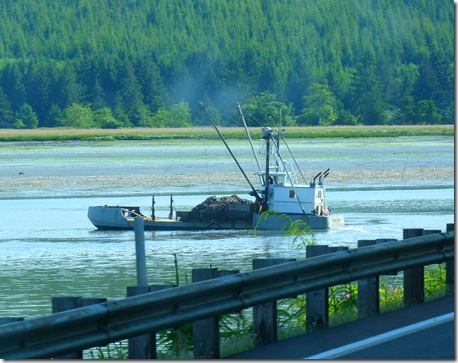 Our friend Diane Melde had told us to look for all of the neat metal sculptures when we came into Raymond, and sure enough, we began seeing everything from flat metal animals and farming equipment, to people, on both sides of the highway. Some were almost hidden in the tall grass alongside the highway, while others were on street corners and standing in front of businesses. The whimsical sculptures gave us a smile as we drove through town. 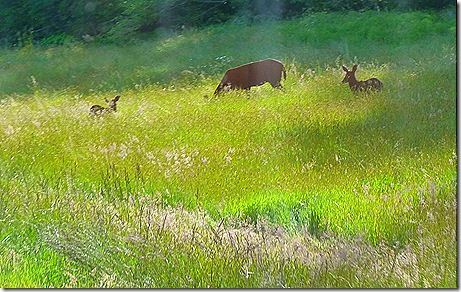 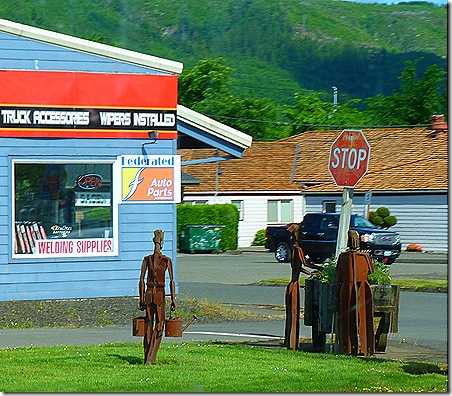 The highway stayed inland when we left Raymond, but still had enough curves to keep us from going very fast. About 18 miles north of Raymond, we turned east on  State Route 107 for a few miles, until we came to U.S. Highway 12 at Montesano, the county seat of Grays Harbor County. I got my start in the newspaper business in Grays Harbor a lifetime ago, and spent several years here. We’ll have to come back and pay my old stomping grounds a visit while we’re in the area.

But not this day, we still had miles to go. At Elma, Highway 12 turns south, but we continued east a few more miles on State Route 8. We pulled into a very nice rest area, which had three long pull-through RV dump lanes, and made a quick potty stop, then got onto Highway 108 at McCleary and followed it to another short section of U.S. 101. I noticed that a station near the Little Creek Indian casino at Kamilche had diesel for $3.73 a gallon, so I called Greg on the radio to point it out to him, since he had just paid $4.17 in Long Beach. I do what I can to make sure the people in my life always have a good day. 🙂

We got onto State Route 3 and took it through Shelton and on to Bremerton, where we saw these aircraft carriers docked at the Puget Sound Naval Shipyard. I’m not sure, but believe they are the USS John C. Stennis and the USS Nimitz. 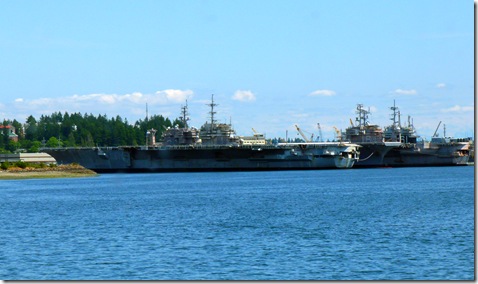 We pulled in to the Elks lodge about 12:45, with 147 miles behind us. The lodge has 23 level back-in RV sites with 30 amp electric and water, for $15/night. We were a bit concerned that our automatic rooftop TV dish might not pick up the Dish Network signal, but we were locked on in only a couple of minutes. Unfortunately, Greg couldn’t get a usable DirecTV signal with his portable dish. (See comment above about making other’s people’s day.)

And best of all, we have fast 3G internet service on our Verizon air card. After the very slow service we had in Long Beach, and at Tillamook, Oregon, it sure is nice to get online and actually be able to accomplish something!

Once we were parked and hooked up, we had a light lunch, I caught up on e-mail, and then I took a well deserved nap. (Yes, I deserved it. Just ask me!) I woke up in time to get ready to go to dinner at King’s Wok, a Chinese buffet that had been recommended to us by a couple of people,. The place was crowded, and we can see why. The selection was huge, and everything was fresh and delicious. We’ll be going back again, I’m sure.

We really like this area, and will be hanging around for at least a week, exploring, and just relaxing.

Thought For The Day – The American flag does not wave because the wind moves past it. Our flag is moved by the last breath of each military member who has died protecting it.

3 Responses to “Oysters And Aircraft Carriers”