Yesterday was a totally nonproductive day. I accomplished absolutely nothing at all, and basically just used up space and oxygen. If I didn’t know any better, I’d think I was a member of Congress!

The predicted thunderstorms arrived late Friday night, and all night long the rain pounded down on our motorhome. The wind was making the old Winnebago rock and roll, and we were treated to a remarkable light show as the storm slowly passed through. I slept restlessly, one ear listening for tornado sirens or warnings, but by about 3:30 a.m. it had eased up quite a bit. Then, about 7 a.m., the big Rottweiler and the pit bull who belong to a tent behind us started barking, and didn’t stop until after 9:30. The dogs don’t seem to be aggressive at all, but I sure didn’t appreciate the owners ignoring the noise they were making. Am I just becoming a grouchy old fart?

The day was still overcast, it rained lightly a couple of times, and there was a steady breeze. Not a good day to do much of anything outside, so we just stayed inside. Terry did some laundry and housecleaning, and I helped by lifting my feet so she could vacuum under me. 🙂

I had a lot of things I could do, from writing, to working on my blogs, to tweaking the schedule for our Eastern Gypsy Journal rally, but I was just too darned lazy. I answered a few e-mails, and then in the afternoon I took a nap on the couch, waking up just in time for dinner. Since I had not accomplished anything all day long, I spent the evening doing the same thing. And that was the extent of my nonproductive day. I think I will run for Congress! My campaign slogan will be “Vote for me and I promise not to do anything!” At least you’d know what you were getting, right?

Now, my buddy Dennis Hill from the RV Driving School isn’t the kind of guy to waste a day. He’s always up to something. In my blog a week or so ago, I included a picture Dennis sent me from Alaska, with him wearing his bright orange Gypsy Journal shirt, with Mount McKinley in the background. Now here’s another picture of Dennis in the same shirt, this time at the North Pole! Do you remember that chick flick, The Sisterhood of the Traveling Pants? Maybe we’ve got something similar going on here.  Check out Dennis and his wife Carol’s blog, Dennis & Carol’s RV Adventures, for some great pictures of their current Alaska trip. 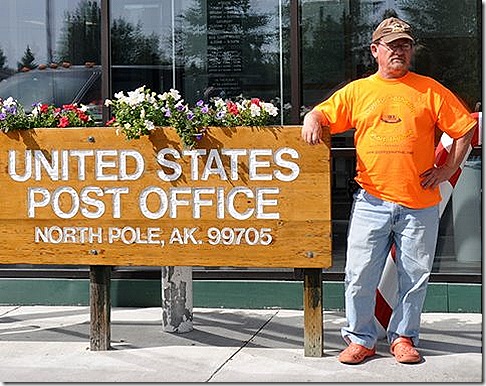 Several people have asked where we’ll be in Minnesota, Wisconsin, and Michigan, hoping we could cross paths. I’m not sure if I responded to everybody, so here goes – we’ll stop in Fargo today to get a couple of stories, and then we’ll be heading for Duluth, Minnesota or Superior, Wisconsin, which is about ten miles from Duluth. Depending on  how late it is when we’re finished in Fargo and how far we travel from there, we’ll find someplace to spend the night along the way. We’ll spend a day or two in Duluth/Superior, and then take U.S. Highway 2 across Wisconsin and into Michigan’s Upper Peninsula, where we’ll pick up State Route 28. I’d like to stop at Sault Ste. Marie for a couple of days, to check out the Soo Locks, and then we have to head for Traverse City for Terry’s annual oncologist checkup and to visit my cousin Terry Cook and his family there. Our next stop will be Muskegon, where I’ll aggravate another cousin, Bernie and her husband Rocky, for a few days, or until they serve me with a restraining order. Then we’ll head for Elkhart, Indiana, where we’ll hang out until it’s time to go to Celina, Ohio for our rally. We’re set for places to stay in Traverse City and Muskegon, but until then, if anybody has any suggestions across Minnesota on US20/SR 210, and in Wisconsin and the Upper Peninsula, let me know.

It’s been asked if we can have a craft show one afternoon at the rally. I have no problem with that, so if some of you crafters would like to have a craft show, send me an e-mail at editor@gypsyjournal.net, or leave a comment below, and we’ll set something up.

At least Bad Nick did something yesterday, posting a new Bad Nick Blog titled Will Work For Pay. Check it out and leave a comment.

Thought For The Day – I love being married. It’s so great to find that one special person you want to annoy for the rest of your life – Rita Rudner

21 Responses to “A Totally Nonproductive Day”