Nick's Blog » A Late Start To A Slow Day

I was having trouble getting yesterday’s blog to post, so it was 2 a.m. before I finally got to bed, which is not uncommon  when we are sitting still, but when we’re traveling. I try to turn in as soon as I post the blog at midnight local time. We hadn’t slept good the night before, and we were looking forward to some serious ZZZ time. But for some reason, both Terry and I just couldn’t get to sleep. It was close to 4 a.m. the last time I looked at the clock.

And then at 6 a.m. we were awakened by a large dog barking. And barking. And barking. It went on and on. We tried to get back to sleep, but just as we’d drop off, the darned thing would start up all over again. Finally, about 9 a.m., we gave up and got up. Why do people let a dog go on and on like that? As it turns out, the dog lives in a house just across the fence from the Elks lodge campground, and everybody we talked to said it starts barking at dawn and keeps it up all day long. At least we have wheels under our house and can leave. I really feel sorry for the poor folks who live in the houses next door to that noisy mutt. I’d be tempted to muzzle the dog and throttle the clod who owns it and allows it to destroy everybody’s quality of life.

Soon after we opened the blinds, John and Gerri Beckman stopped over to say hello, and we visited for a few minutes. The last time we had seen them was in Casa Grande, Arizona, a few years ago. We had a nice visit, and just as John and Gerri were leaving, a truck stopped outside and somebody yelled “It’s Nick!” It was Dutch and Di Irrgang, vendor friends we know from the RV rally circuit. It’s been a while since we crossed paths, so it was great to see them again, and we had a nice visit.

But we still had more visitors before we left the Elks campground. Just as we finished hooking up the Explorer to our Blue Ox tow bar, a couple walked up and said “We know you!” It was Randie and Shawn Farish, whom we met several years ago in Moscow, Idaho when we were teaching for Life on Wheels. At that time, they lived in Hawaii, but these days they are living the RV lifestyle. Last year they purchased an RV park in Quartzsite, Arizona, renamed it The Scenic Road RV Park, and since then, they have been busy remodeling and upgrading the campground. During the hot Arizona summer, they turn the place over to the lizards and roadrunners, and travel in their RV. We talked for a while, and we promised to stop in the next time we’re in Quartzsite.

With all of our visitors, we didn’t pull out of the campground until just after 11:30, getting back onto Interstate 90 eastbound. Beautiful Lake Coeur d’Alene is 25 miles long, and up to three miles wide in some places, and for miles the highway paralleled the lake. The lake is a water lover’s paradise, with great fishing and boating, and the shoreline is dotted with marinas and resorts. 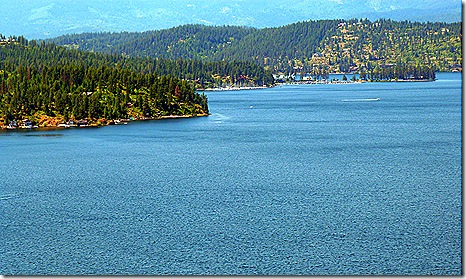 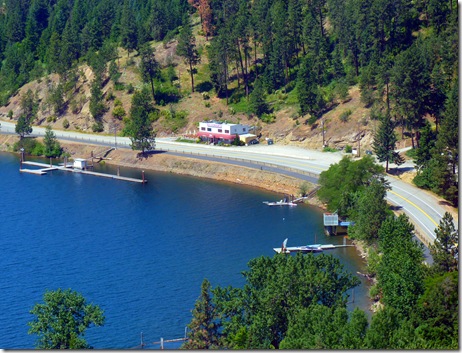 We passed by historic Wallace, an old silver mining town that was the last place to be bypassed by Interstate 90. Until 1991, Wallace had the last traffic light on the highway, until Interstate 90 was rerouted on an elevated platform above the downtown area.  Every downtown building in Wallace is listed on the National Register of Historic Places, including the Oasis Bordello Museum, which was a working cathouse that it finally closed in 1988! 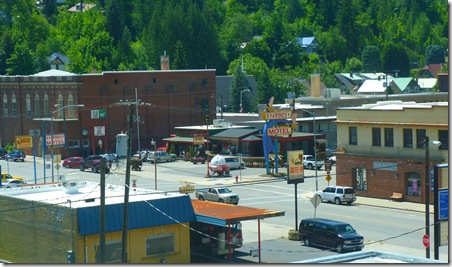 We began the steep climb up to Lookout Pass, and the Montana state line. A sign at Mile Marker 0 warned of potholes ahead. That’s kind of like telling somebody “Nick is chubby.” For the next 75 miles or more, it was absolutely the worst stretch of highway we have traveled anywhere in America. People complain about Interstate 10 in Louisiana, but that highway is a featherbed compared to I-90 in Western Montana. Usually our factory installed air bag suspension, and the Koni shocks that Redlands Truck and RV Performance Center installed on our Winnebago diesel pusher, give us a sweet ride. But not yesterday. Books were flying off shelves, light covers were falling off the ceiling, and my fillings were falling out of my teeth. 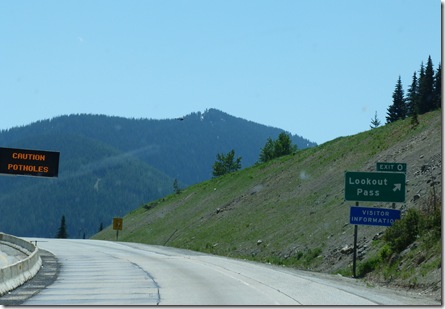 As soon as you cross into Montana, you start a very steep downhill descent, with warning signs advising trucks to travel at 25 miles per hour for the first four miles. A year ago, this would have scared me, because the exhaust brake on our motorhome is not nearly as good as the Jake brake we had on our MCI bus conversion. Or so I thought, until my buddy Dennis Hill from the RV Driving School told me how to use it properly. Dennis said to gear down at the top of a grade and keep the RPMs at 2,000 or more, and not to wait until I was going too fast to downshift. I put our Allison transmission in Second gear, and the exhaust brake kept us at 29 miles per hour all the way down. Of course, some of the truckers were flying past me at 50 or so, swaying around the curves and endangering everybody on the highway. Idiots. The road was rough all the way to Missoula, and I averaged about 48 miles per hour from the border to Missoula. 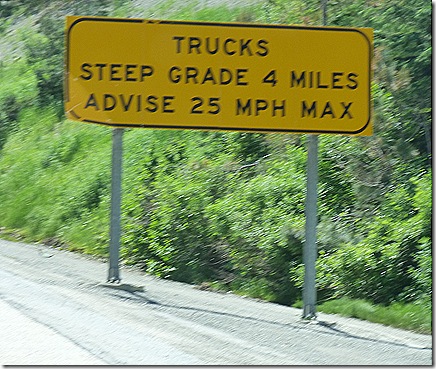 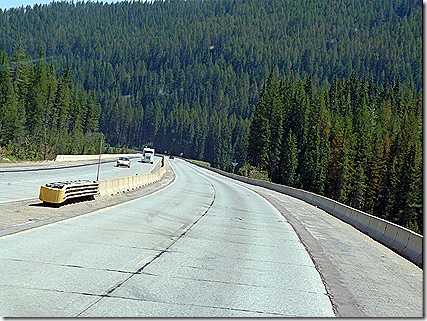 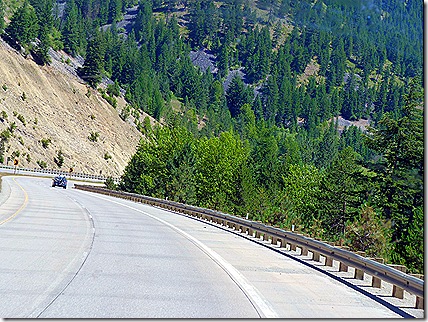 We passed Lincoln’s 50,000 Silver Dollar Bar, which actually has 50,000 real silver dollars embedded in the bar top, in the walls, and on the ceilings. They offer free RV overnight parking, and the food is good, too. 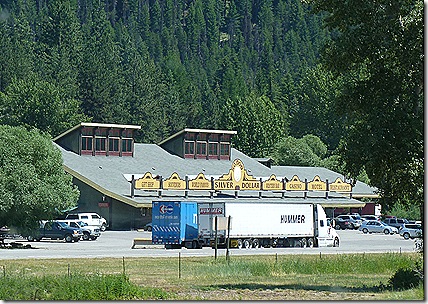 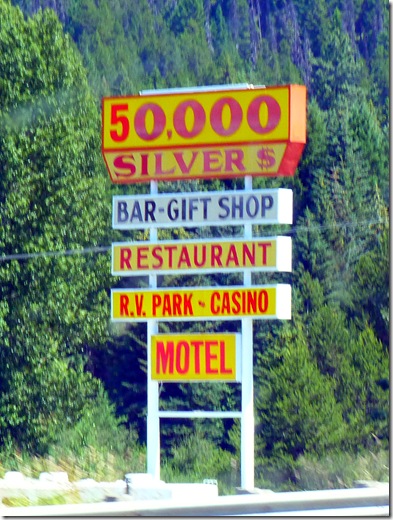 A little later on we started seeing signs for the Testicle Festival, an annual event at the Rock Creek Lodge in Clinton. Every time I see those signs, I cross my legs and drive faster. 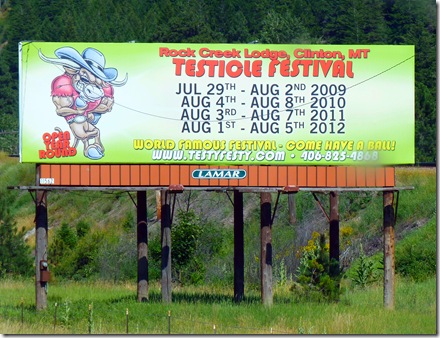 Montana has some spectacular scenery, blue lakes, whitewater rivers that follow the highway for miles, heavily forested mountains, and stark rock cliffs. At least that’s what Miss Terry told me, and she has the photos to prove it. I was too busy trying to hold the motorhome on the road and keep from bouncing out of my seat to be able to see much. 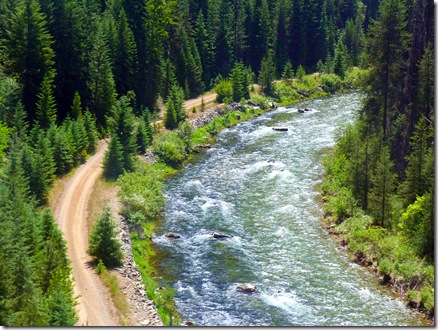 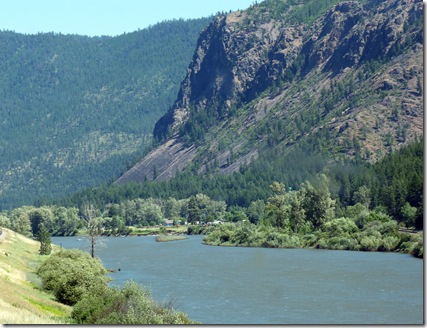 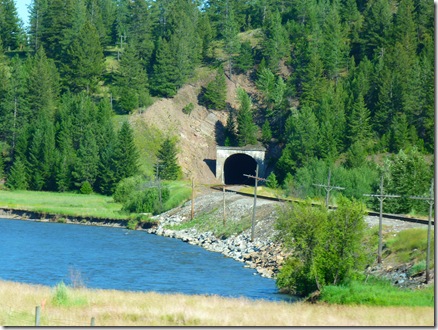 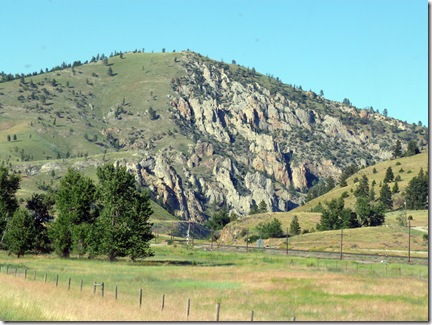 Add to that it was terribly hot. The thermometer on my dashboard, which reads outside temperatures, was at 100 for most of the afternoon, and when we stopped for fuel, the hot pavement radiating back up sent it to 112!

We had hoped to make it to Bozeman, a distance of about 365 miles. That’s what we did on Sunday, from Bremerton to Coeur d’Alene, and while a lot of RVers we know never travel that far in one day, when we’re in “get there” mode, I just want to put miles behind us, so we can reach our destination, and then settle in. But between our late start, and the terrible road, we knew we were not going to reach Bozeman until late in the day. I had Miss Terry call anyway, just to see if the RV park our friends Ron and Brenda Speidel had recommended there had any openings. As it turns out, the Gallatin County Fair was going on, there were no openings at that RV park, or anywhere for miles around.

We were both tired from lack of sleep and the rough road, so at Deer Lodge we called it a day and stopped for the night at the Indian Creek Campground, which another good friend,Orv Hazelton, had recommended. It’s a neat and friendly little place, just off the highway, but we didn’t hear any road noise once we were inside and had the air conditioner running. They give a discount for Good Sam and Escapee members, and we got a full hookup 50 amp pull through site for $29, including tax. We had covered 245 miles, which is still a good day on the road.

We’ll push on today, and I have no idea where we’ll end up. We’ve crossed Montana many times, so we won’t linger long here. North Dakota is one of the few states we have never been in with an RV, so we’re headed there, and have several places we want to see once we get there.

Thought For The Day – Be careful about reading health books. You may die of a misprint. – Mark Twain

15 Responses to “A Late Start To A Slow Day”