We spent yesterday walking the waterfront here in Newport, poking our heads into shops, watching the fishing boats coming and going, and people watching.

Newport is one of my favorite towns along the Oregon coast, the perfect cross of working fishing port and tourist destination, not too commercialized, laid back, and friendly. Years ago, when I was in the newspaper business in the Pacific Northwest, I really wanted to live here. And if we ever hang up the keys, and decide to settle in the Pacific Northwest, Newport would be number one on our list.

The commercial marina is a busy place, with crab and fishing boats coming and going, unloading their catches, and the crews cleaning and maintaining the boats for their next trip out to sea. You can even buy fresh crabs right off the boats tied up at the docks. 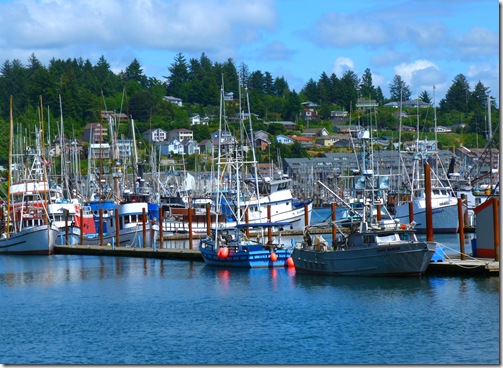 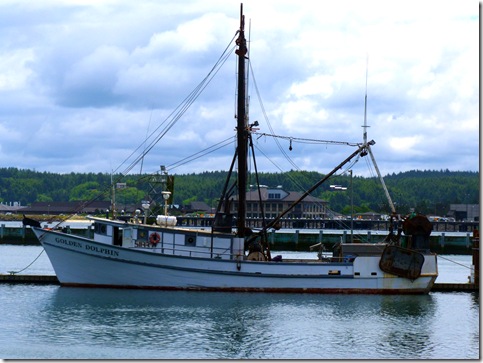 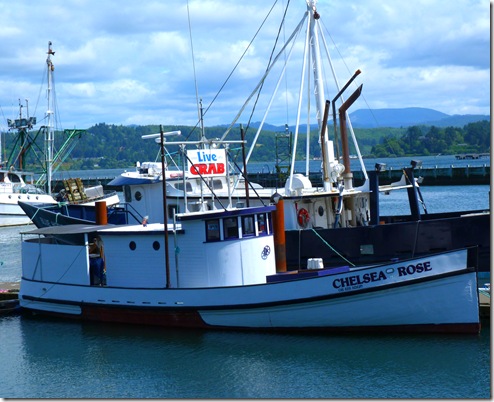 Or you can stop at the fish markets along the waterfront and find something to take home for dinner. 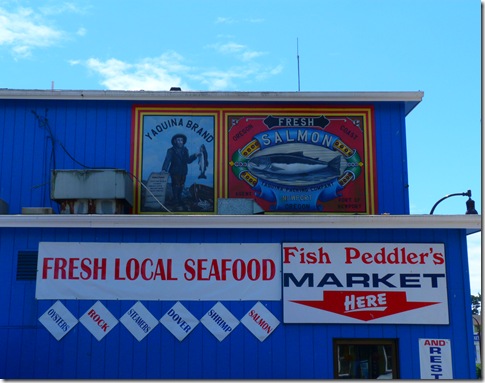 If you’re feeling lucky, you can try to catch your own dinner. We stopped to watch some boys crabbing, and they had a couple of nice keepers. You can bet those pinchers will put a hurt on you! Been there, done that. 🙁 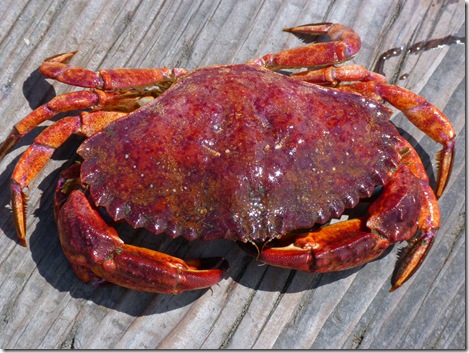 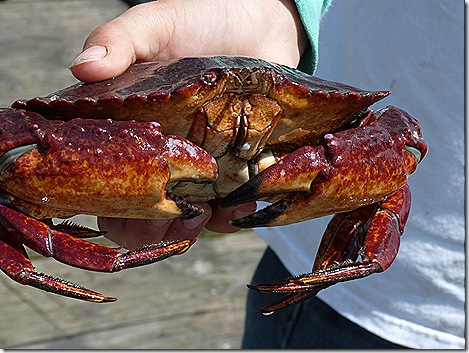 If you’d prefer to have somebody else do the cooking, there are some good restaurants along the waterfront, including Mo’s, an Oregon coast tradition. Local lore says that years ago, an elderly lady started her car, parked at the curb in front of Mo’s, and put it in drive instead of reverse, then drove right into the front of the building. Instead of being upset, the restaurant’s owner, Mo Niemi, comforted the driver by putting her arm around her and telling her that she was just going to install a garage door over the damaged area, so the lady cold drive in any time she wanted to. And that’s just what she did! In good weather, the door is raised, making Mo’s an open air restaurant. 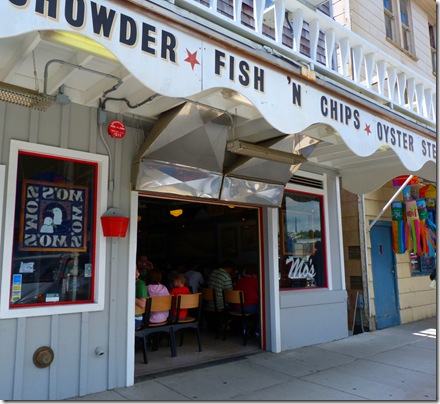 There are shops all along the waterfront, selling everything from fine artwork, to tee-shirts and trinkets, and we stopped to check them all out. There was also a nice kitchenware shop, and Miss Terry can never pass one of those up. She found a couple of goodies she’s been wanting, including a new ceramic knife, and I bought two jars of mustard. I don’t care for that cheap yellow stuff you get at the supermarket, but I like a good deli or honey mustard. 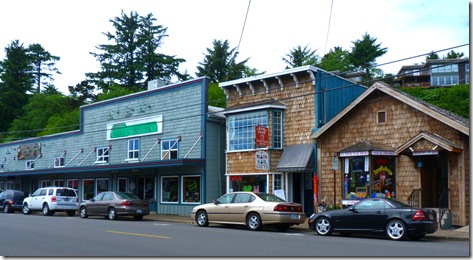 There are some places that are very popular with the tourists, including Ripley’s Believe or Not, the Wax Works, and Undersea Gardens, but we passed them up. 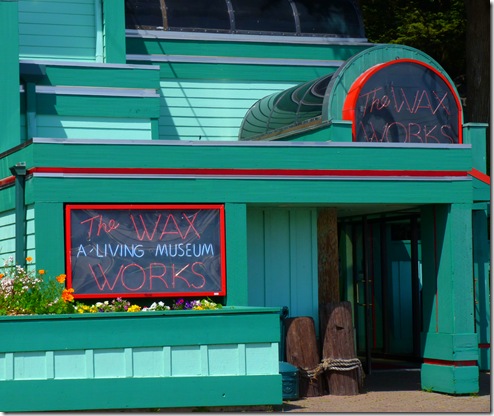 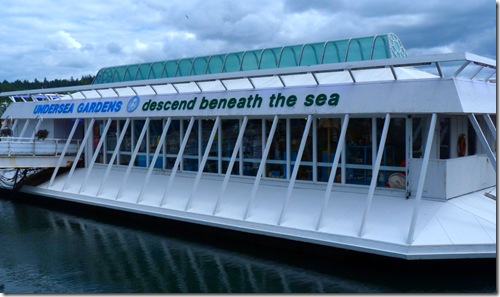 Newport is also known for its beautiful murals, and several buildings along the waterfront have nautical murals decorating them. 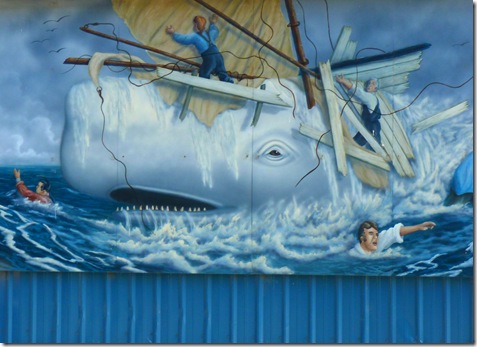 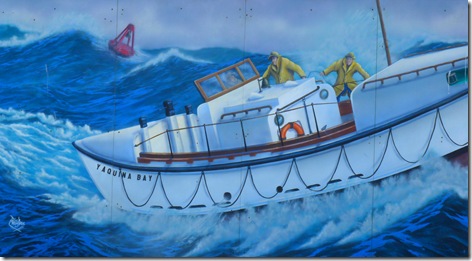 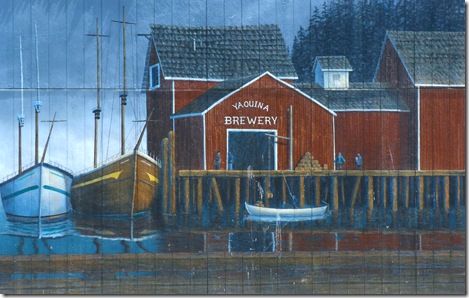 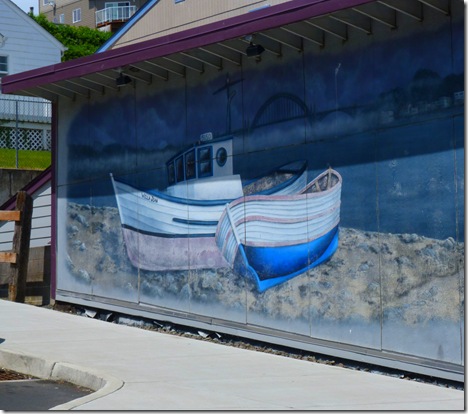 People aren’t the only ones who enjoy hanging out on Newport’s waterfront. There were several California sea lions lounging around on docks and swimming in the bay. 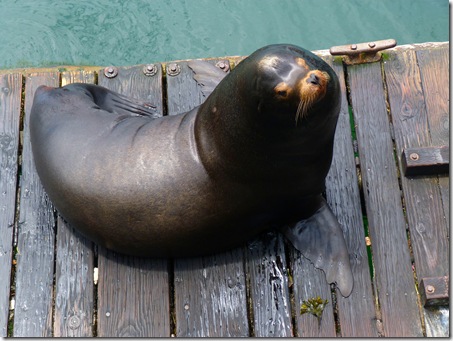 And above it all looms the beautiful Yaquina Bay Bridge. 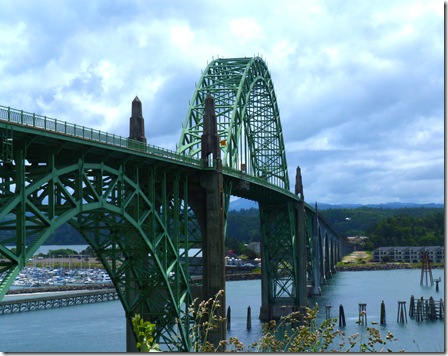 Late in the afternoon, we drove to Pacific Shores RV Resort to meet up with our friends Butch and Jodi Spiller, and admired the view of the ocean and Yaquina Head lighthouse from their motorhome’s windows. I can see why they love their lot at Pacific Shores so much. I could sit there all day and just drink in the view and the fresh sea air.

The four of us drove to Depoe Bay, where Butch and Jodie treated us to a very nice seafood dinner, and we spent a couple of hours visiting, and enjoying their company. Jodie is a quilter, and she teaches a lot of craft classes at our Gypsy Journal rallies. Besides being an accomplished photographer, Butch is a gadget guy, who had some neat e-book readers and other toys I admired. And both of them are very nice people whom we are honored to call our friends. Thanks for the dinner, and for making time for us, Butch and Jodie. We look forward to getting together again, somewhere down the road.

Well, our holding tanks are full, so it’s time to leave Newport. Today we’ll head up the road toward Tillamook, and hang out there for a few days, until we go into the Pacific City Thousand Trails early next week.

2 Responses to “Walking The Waterfront”