One of the great things about our job is the really neat things we get to do, all in the name of work. Yesterday, we had a real adventure. We left the Long Beach Thousand Trails and drove 120 miles to the excellent Evergreen Aviation & Space Museum, in McMinnville, Oregon. The museum has an impressive collection of vintage aircraft, and a separate building that houses a separate museum devoted to space exploration.

But the crown jewel of the museum’s collection is one of the most famous airplanes of all time, the Spruce Goose. The brainchild of shipbuilder Henry Kaiser and eccentric inventor and entrepreneur Howard Hughes, the Spruce Goose is the largest airplane ever built, and is so big that when you first walk into the museum, you don’t even realize what you are looking at. It dwarfs the dozens of other aircraft parked under and around it. 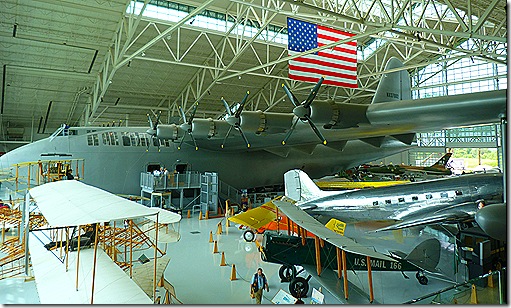 It is so big that we couldn’t get the entire plane in one photograph. But to put things into perspective, here is a helicopter suspended from the roof near the airplane’s tail, which stands eight stories tall! And below are several airplanes parked under the rear fuselage. 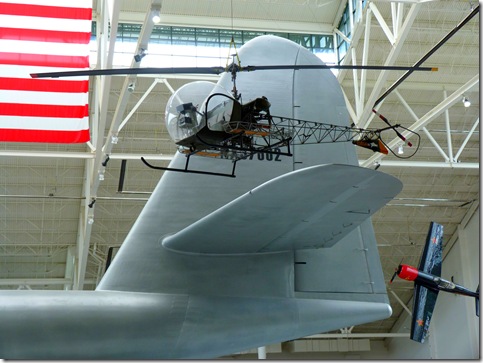 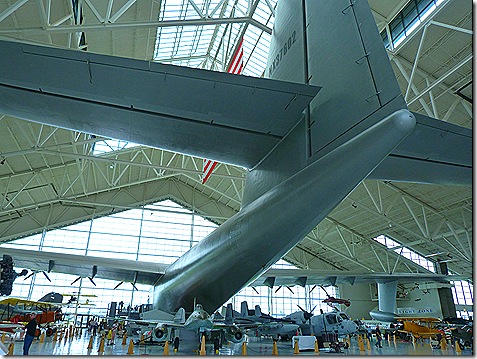 Or compare it to these jet fighters parked under its wing. 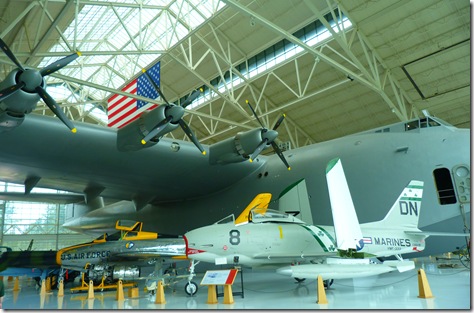 The Spruce Goose was designed as a transport, to carry troops and equipment across the Atlantic Ocean during World War II. Due to wartime shortages of material, the aircraft was built entirely of wood. At over 218 feet long, and with a wingspan of nearly 320 feet, the Spruce Goose was also called the Flying Boat, capable of taking off and landing on the water.

The aircraft only made one flight, on November 2, 1947, when Howard Hughes was conducting a taxi test and suddenly and unexpectedly lifted off and flew just over one mile, at an altitude of 70 feet. Hughes would never reveal if the flight was planned ahead of time, but he had proven to skeptics that his massive airplane could fly.

After that one flight, the Spruce Goose was kept in a climate controlled hanger, with a full crew maintaining it, until Hughes’ death in 1976. It remained in Long Beach, California until 1993, when it was disassembled, loaded onto a barge, and brought up the coast to the Columbia River, and then upriver to Portland, Oregon, for final transport to its new home in McMinnville.

Larry Wood, the museum’s Executive Director, gave us a personally guided tour of the Spruce Goose, taking us inside for a look down the huge cargo compartment toward the tail. Yes, those really are beach balls you see in the foreground. In a sort of high tech meets low tech marriage, Hughes had a large number of them brought aboard to assist in flotation, if needed. 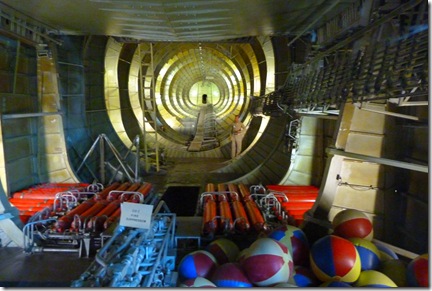 Next Larry took us up into the cockpit, for a close up view that only a few visitors ever get. What a treat to stand next to the very seat that Howard Hughes sat in when the Spruce Goose took its historic flight! There were not many frills, except for the very comfortable passenger seats. The cockpit and control deck holds a large array of gauges and controls that the airplane’s crew monitored during flight. 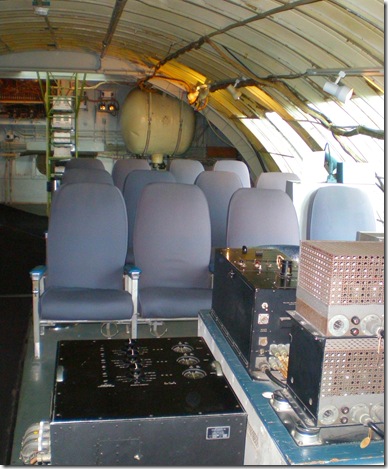 Besides the Spruce Goose, the museum has some wonderful old airplanes on display, including a World War II B-17, the venerable bomber known as the Flying Fortress. Famous for its ability to absorb massive amounts of damage and keep on flying, the B-17 was loved by its crews, and was used extensively in bombing raids over Germany. 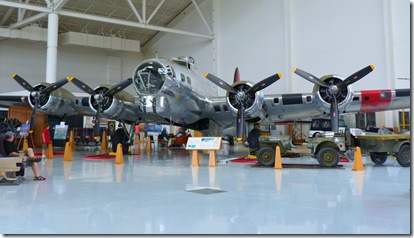 Here is another much loved airplane on display at the museum, the famous Piper Cub. One of the most stable and forgiving airplanes ever built, its fans said the Cub couldn’t be crashed. 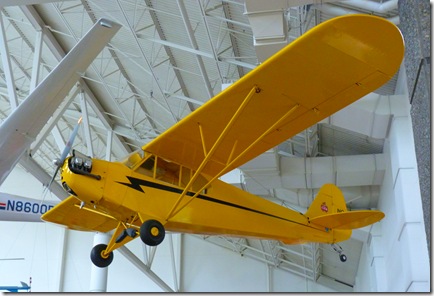 The museum also has one of my favorite airplanes, a Ford Tri-Motor. When I was a youngster, I flew to Marblehead, in Lake Erie, in one of these several times. 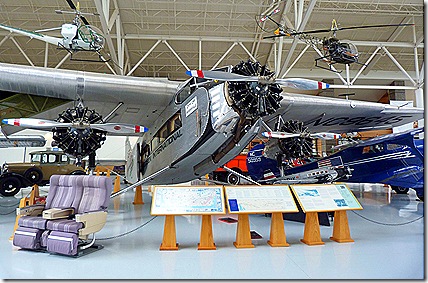 After we had toured the airplane museum, Larry led us across the campus to the space museum, which holds everything from an SR-71 Blackbird, to a collection of rockets, and Mercury and Gemini space capsules. 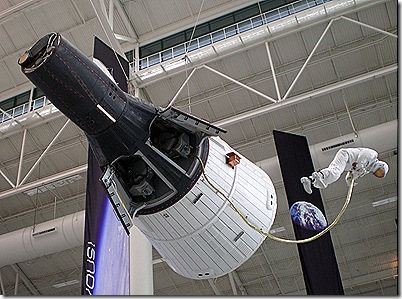 This is a V-2 rocket, the first long range ballistic missile, and the first manmade object to reach space.

There were so many neat things on display at the museum that it will take a feature article in an upcoming issue of the Gypsy Journal to do it justice. In the meantime, if you are traveling through the Pacific Northwest, do yourself a favor and stop by McMinnville and tour the Evergreen Aviation & Space Museum. You won’t regret it. The museum has plenty of room for RVs to park, and Larry said if you ask at the security desk, they will give you permission to dry camp overnight.

When we left McMinnville, we drove back to Seaside, to meet our friends Jeannie Sparks and Eldon Tompkins for dinner. Well, Greg drove; when we left the museum, I promptly fell asleep and woke up just a couple of miles from town. We had a nice visit and a nice dinner with Eldon and Jeannie, and then got back on the road toward our campground. We pulled in sometime after 9 p.m., almost twelve hours after we left. It was a long day, but oh, what a great day it was!