I got a call early yesterday morning for the NACO South Jetty campground, telling me that our UPS package had arrived, and they were holding it at the guard shack for us We drove over to pick it up, and then stopped at the post office to see if our mail had also arrived. It had not, so we’ll go back again this morning and check.

It had rained during the night, and the morning was misty and cool. We drove eleven miles north of town to Sea Lion Caves, America’s largest sea cave. There is a pull out just past the parking lot, which offers views of the rocks below, where dozes of Steller sea lions lounged about in the ocean’s spray. 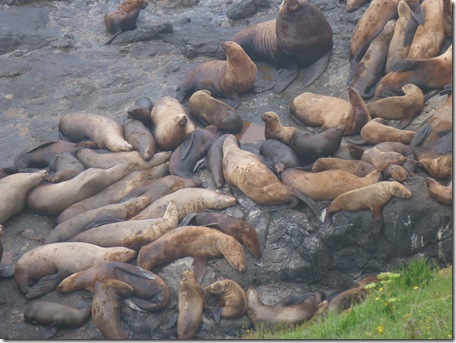 There was a couple there taking pictures, and the man asked me if I would take one of the two of them with Haceta Head Lighthouse in the background. They were nice folks, and we visited with them for a few minutes. They have a van conversion, and are on their way to Alaska. The wife had lived in Tucson for years, and spent a lot of time visiting the White Mountains, our home before we became fulltime RVers. She and I talked for a while about the terrible fire that has destroyed 600 square miles of beautiful forest there, and is still burning out of control.

The steady breeze coming in off the water had us shivering before long, so we went back to Sea Lion Caves, where assistant manager Jim McMillan gave us a tour of the historic attraction. First discovered in 1880, visitors have been coming here ever since to travel down into the cave to see sea lions mating and rearing their young.

Besides the sea lions, the cliff face is home to a variety of birds, from cormorants to Pigeon Guillemots, and it is not uncommon to see gray and killer whales in the water below. 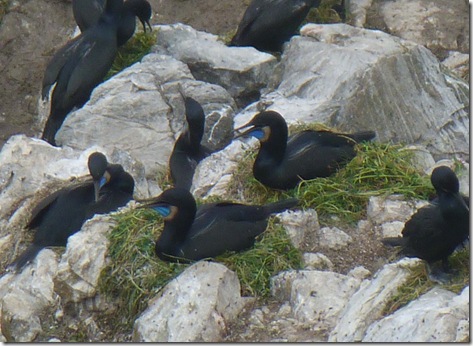 We spent a while watching the huge, ungainly sea lions and their pups, and then thanked Jim for his time and made our way back up to the gift shop, where Terry bought some delicious fudge. 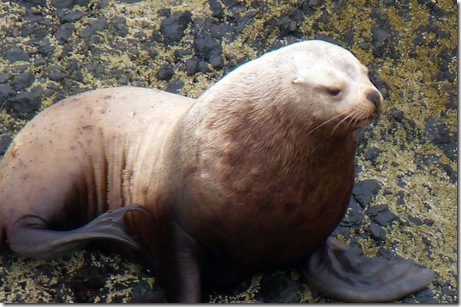 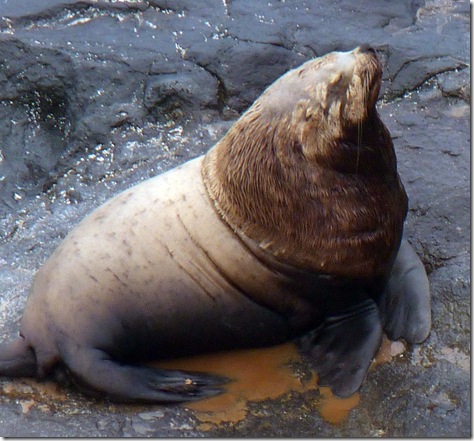 Then we drove back into town, slowing down at one point as a group of people on a trail ride crossed the highway from the beach. Horseback riding is just one of the many activities available for visitors to the Florence area. 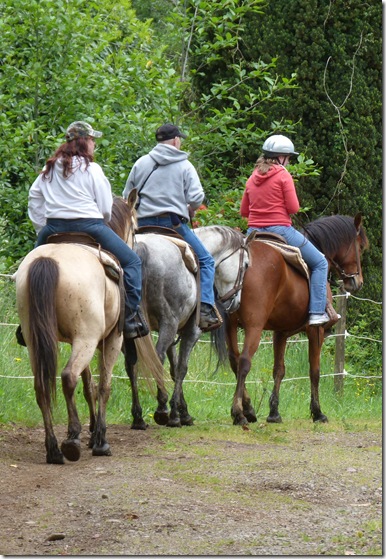 Along the way, we stopped at the Happy Kampers Yarn Barn, so Terry could check out the goodies. I was going to wait in the Explorer, but as soon as Terry went inside, she called me to say I really needed to come in and get a puppy fix. In this case, the “puppy” was two year old collie who was just as lovable as he was shaggy. As soon as I walked in, he greeted me, and I spent the next fifteen minutes on my knees, getting my face licked and loving up the adorable mutt.

Back home, I was tempted to take a nap, but instead spent the afternoon working on the new issue of the Gypsy Journal. It’s hard to be disciplined and work, when there are so many fun things to see and do in the area.

About 4:30 we decided we couldn’t live on fudge alone, so we went back to Chen’s Family Dish, the same Chinese restaurant where we had dinner the day before. This time I had the shrimp fried rice, and Miss Terry had a combination platter. And just like the day before, everything was beyond delicious. Terry and I agree that if we lived here, we’d probably eat there every night of the week!

Mel and Nina Harrison, fulltiming friends whom we last saw at our rally in Yuma in March, are parked near us here at the Florence Elks lodge, and when we got back to the motorhome, Mel came over to chat for a few minutes. We got onto the subject of cameras, and Mel said he refuses to give up his heavy old SLR film camera and interchangeable lenses, because none of the digital ones he has seen can compare. Terry showed him her Panasonic Luminx and demonstrated some of its features, and by the time he left, Mel was planning to order one for himself!

After Mel left, I turned the computer over to Bad Nick for a while, so he could post a new Bad Nick Blog titled A Good Man Gunned Down, about the murder of my friend Larry Link.

Hopefully, our mail will arrive today, and then we’ll decide if we want to hang out here for another day or two, or move up to the Elks lodge in Newport. Since I need to get some work done, it really doesn’t matter where we’re at. We’ll see what happens.

Thought For The Day -  Life is like a roll of toilet paper…..the closer it gets to the end, the faster it goes.

One Response to “Sea Lions And Fried Rice”