Yesterday was a busy day, but we solved a problem, at least temporarily, and we had a lot of fun in the process. But then, we always seem to have fun, no matter what we’re doing.

As I reported earlier, our black tank valve has been leaking, and through Greg tried to fix it while we were at Park of the Sierras, the problem is still there. Getting to the black valve to replace  it is going to be a real bear, because it is activated by a cable in the sewer bay, and the valve itself is very hard to get to. Meanwhile, the valve keeps leaking. 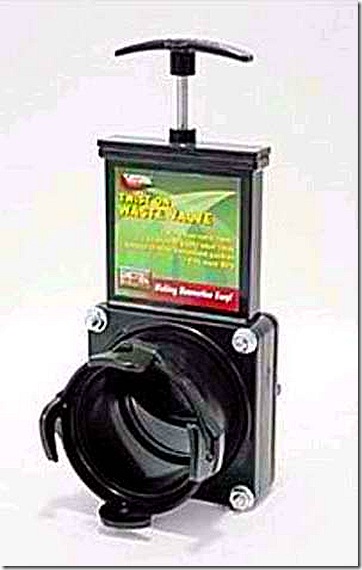 While we were in town, we stopped at Sam’s Club, then had an early dinner at Fuddruckers. Heavy clouds had been hanging low in the sky all day, and while we were eating, it began to rain hard, then the lighting started to flash, and hail followed! Yuck! We waited until the storm had let up a bit, and then we started back to the campground, with a couple more stops along the way. We found out later that a tornado had touched down in Yuba City, about 20 miles north of the Thousand Trails.

I wanted a cappuccino before we left town, and depending on who you want to believe, Greg or myself, I either did not express that desire clearly enough to be understood, or he never listens to a thing I say and just ignored my needs. You know, we’re starting to sound like an old married couple. Maybe we need some time apart. Or else counseling. 🙂

We drove around Nicolaus, the little town where the campground is located, looking for a convenience store that might have cappuccino. As it turns out, there isn’t a store in Nicolaus. In fact, it’s not even a town, it’s just a few houses and a closed down tavern. So we drove a couple of miles east to the bustling metropolis of East Nicolaus (go figure), which actually had a store and a snack shop. Both of them were out of business too. Okay, time to give up.  Driving back to the campground, I spotted a beautiful rainbow, and Greg was nice enough to pull over a couple of places so Terry could take some pictures. Who knew the end of the rainbow was in Nicolaus? 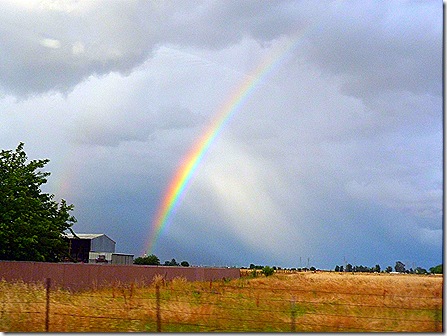 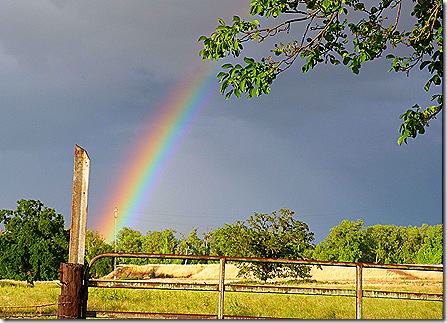 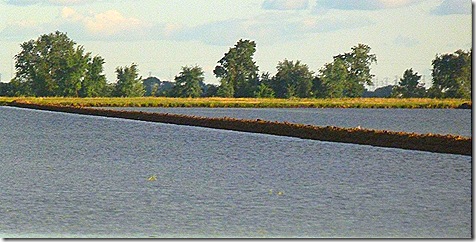 I think I’m power challenged. A couple of weeks ago, we were at the Las Vegas Thousand Trails, and the electricity was out for the last two days of our stay. When we arrived back at Lake Minden, the storm had knocked out the power there too! Our batteries were getting down below my comfort level, so I fired up our Onan generator for a while, and then the power came back on.

There are supposed to be more thunderstorms tomorrow, so we’ll probably hang around here another day before we continue on down the road toward the Oregon coast. We don’t like to travel in bad weather if we can avoid it, and our first Thousand Trails reservation, in Florence, isn’t until the 7th, so we have time.

Thought For The Day – Thoughts are real, be careful what you think about.

6 Responses to “Rice and Rainbows”