It’s always a crapshoot working with a new commercial mail service when we have an issue of the Gypsy Journal to mail out, and this time around we went bust. The mail service we had contacted to handle the mailing for the July-August issue assured us they had the capability to get the job done, but I think they had no idea just how much work is involved in a job our size. After muddling around and making some false starts, they dropped the ball and we had to scramble for an alternative.

As it turns out, there was nobody in the area capable of doing the job on short notice, so we were left with two options; drive a long way back and forth to Portland, a total of four trips, to pick up addressed envelopes, stuff them and take them back, and still have the papers go out late (which wasn’t an option, in our opinion), or bite the bullet and send the papers that usually go out to subscribers by Standard Rate Mail by First Class instead. That would cost us a lot more money, almost twice as much as usual, and involve a lot more work, but it’s always been important to us to get the Gypsy Journal into our subscribers’ hands on a timely basis. So you do what you have to do.

So it’s been a whirlwind of work to reformat the mailing and get it out, and poor Miss Terry has been going from morning until late at night, but she finally got the last envelope stuffed late last night, and this morning I’ll take the last few tubs of papers to the post office to get them in the mail. I really have to thank Beverly, at the tiny Seaview, Washington post office near the Thousand Trails campground. She’s not set up for the amount of mail we have brought her in the last week, but she took on the challenge and really came through for us. I wish the rest of the U.S. Postal Service was as customer oriented. It would sure make our job easier!

We had made arrangements to tour Fort Clatsop, where the Lewis and Clark Expedition spent a cold, wet winter after arriving on the Oregon coast at the end of their epic journey across the country, so yesterday we took a break from the mailing chores to drive back across the Columbia River to the fort. 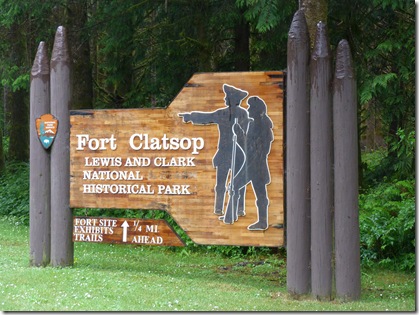 The fort is a part of Lewis and Clark National Historical Park, one of America’s newest national parks, and includes hiking trails, a very nice Visitor Center, and a replica of the crude log fort where the explorers lived from December, 1804 to March, 1805.

We watched two videos in the Visitor Center, one on the Voyage of Discovery, and another from the local Indians’ point of view, about these strange new arrivals to their traditional homelands. Then we toured the small museum, which had displays of beads and other goods the explorers brought along to trade with the Indians, as well as the many items the Indians made from cedar trees – everything from clothing, woven hats, baskets, and canoes. 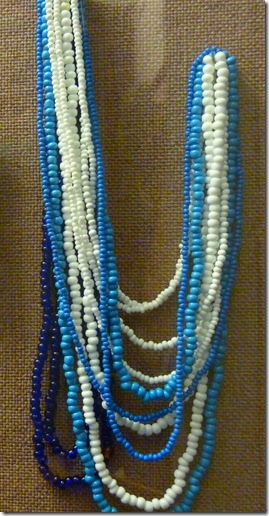 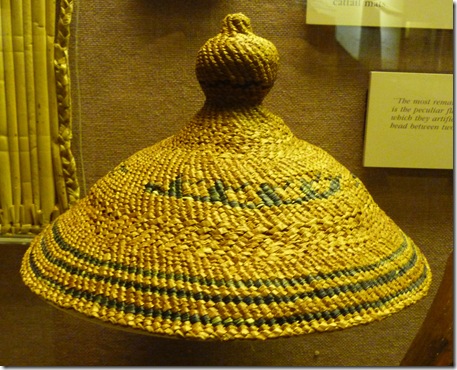 It has been raining  for a couple of days now, but we popped open umbrellas and walked a couple of hundred yards down a trail to the log fort, where a costumed interpreter named Tom told us about the extensive planning that went into the expedition, the hardships the explorers faced on their journey, and how Meriwether Lewis and William Clark had the perfect combination of skills and experience to lead the adventure. 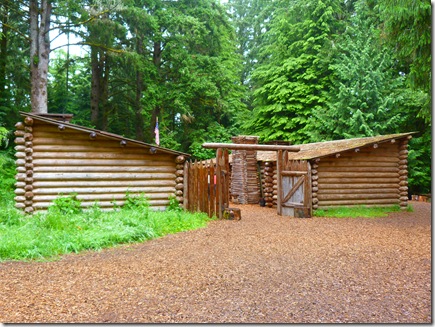 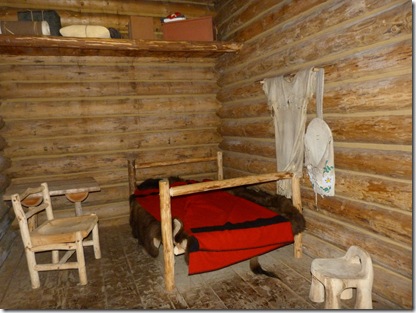 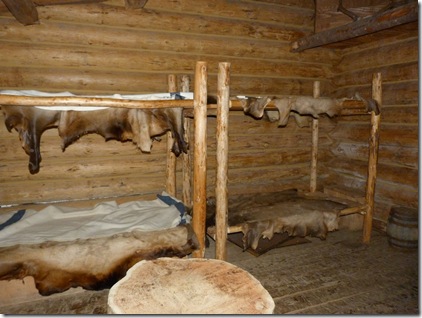 Then Tom demonstrated loading and firing a flintlock musket like the ones the explorers used during their trip. Though slow to load and fire, the muskets served the adventurers well on their journey. 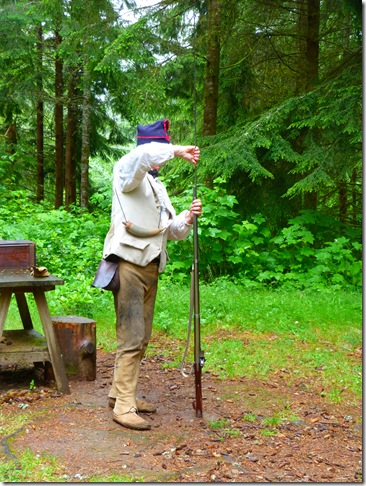 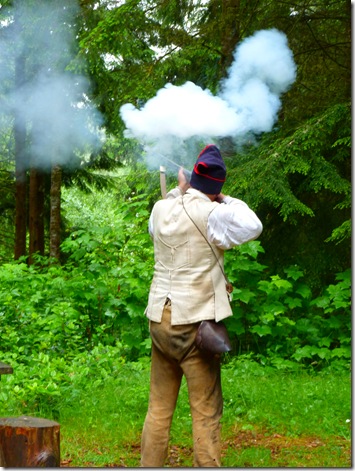 We have been to a lot of historic sites in our travels, and listened to a lot of docents and interpreters in our time, but I don’t think we’ve encountered many people who could compare to Tom when it comes to having such a broad knowledge of his subject, and the ability to share it so well. And no wonder, Tom spent part of his working life as a school teacher! I bet he was a favorite with his students! 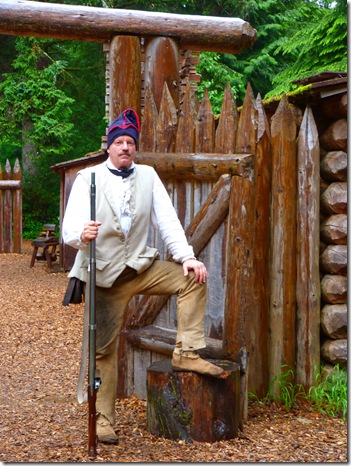 When we left Fort Clatsop, we drove out to the beach at Fort Stevens State Park, and braved the cold wind and light rain to see the rusted hulk of the Peter Iredale, a four-masted steel sailing ship that wrecked in a squall on Clatsop Spit on October 25, 1906. Fortunately, the crew of 25, and two stowaways, survived, and today the rusted bow of the ship is all that remains, as a popular tourist attraction. 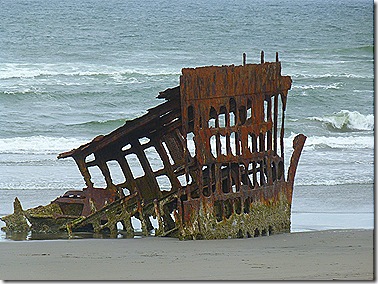 Fort Stevens served the United States from the Civil War until after World War II, protecting the coast and the Columbia River from enemy invasion. On June 21, 1942, a Japanese submarine shelled the fort’s Battery Russell, in what would be the only attack on a mainland American military installation during World War II. Nobody was injured in the attack, and only minor damage was done to the fort. Today, the fort has a few gun emplacements left, and a handful of concrete buildings, as well as a small museum. 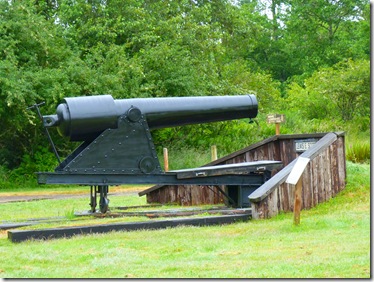 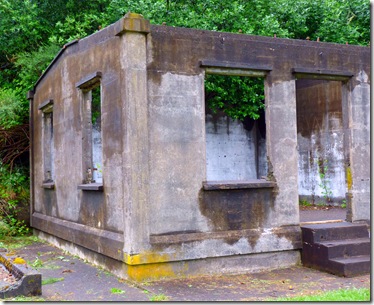 By the time we left Fort Stevens, it was late in the afternoon and we were tired and hungry. We drove back to Astoria and had dinner at the Golden Luck, an excellent Chinese restaurant with a great view of the bridge over the Columbia River. We’ve been back and forth across the bridge so many times in the last ten days that it doesn’t even bother me in Greg’s Dodge pickup or our SUV anymore. but I still don’t want to drive over it in our Winnebago!

When we got back to the campground, the evening was spent with more envelope stuffing, making up for lost time, until the job as finally done.

3 Responses to “Mail, Forts, And Shipwrecks”