Yesterday we once again crossed the bridge to Astoria, Oregon, to tour the impressive Columbia River Maritime Museum, located on the busy waterfront.

The museum tells the stories of the brave men (and women) who have made their living on the treacherous shore of the Pacific Ocean, and along the broad and wild Columbia River, from the first Indians who fished these waters in primitive cedar canoes, to the explorers, commercial fishermen, and deepwater sailors who literally cast their fates upon the waters, as well as the brave Coastguardsmen who put their lives on the line every day of the year to come to the rescue when things go bad.

The stretch of coastline from Tillamook Bay in Oregon, north to Washington State’s Long Beach Peninsula, has been called the Graveyard of the Pacific, due to the almost 2,000 vessels and hundreds of lives that have been lost to the rocks and towering waves that can smash even the largest ship to pieces in moments. But, when the waters are calm and Lady Luck smiles on them, these same waters have yielded fortunes to those who are willing to work hard and risk everything in the hope of a big payoff.

Displays at the museum cover the history of the Columbia River, once a wild and treacherous waterway that has been tamed with a series of dams, and of the offshore waters of the Pacific. And separating the two is the notorious Columbia River Bar, where the strong current of the river meets the wild waves of the ocean head on.  Experienced mariners will tell you that there is no more dangerous or deadly piece of water in the world.

The museum is an immense facility, housing several full size fishing boats, including open fishing boats liked this, and a sailing gillnetter, once a common fishing vessel in this region, but now the only one of its kind left in the world. 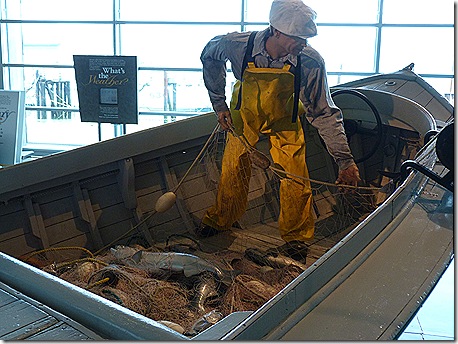 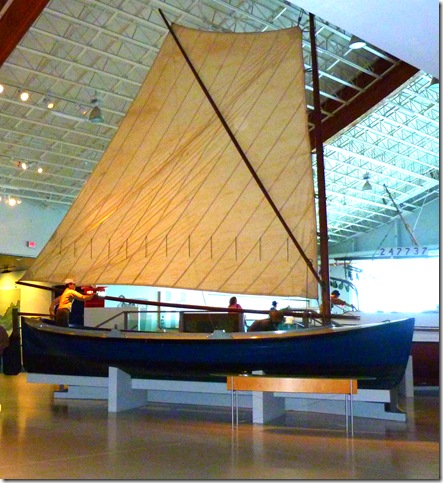 Nearby is the Darle, a powered troller of the type that replaced the sail boats that came before. 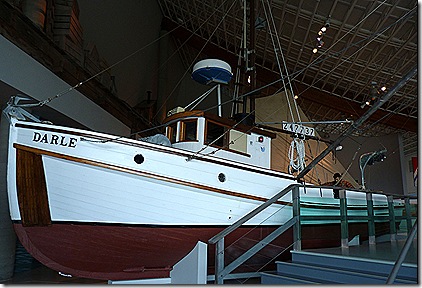 Other boats on display inside the museum include small Coast Guard rescue craft, and the CG44300, a Coast Guard lifesaving boat that served gallantly on the Pacific coast for 34 years. In her long and distinguished career, the boat was rolled several times, and during one storm, 30 foot waves tumbled her end over end, but each time her design allowed the boat to right herself, and she survived. During one mishap, in Yaquina Bay, a 10,000 ton freighter ran over the CG44300 while she was tied up at her dock. Everyone thought that was the end of the hardworking boat, but once the debris was cleared away, the CG44300 popped back to the surface, ready to go back to work after minimal repairs! 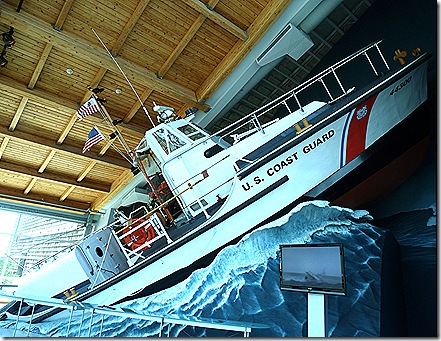 Other displays at the museum include a beautiful collection of nautical artwork and model ships, scrimshaw, a whaling harpoon gun, and equipment used on the boats and ships that work the Columbia. 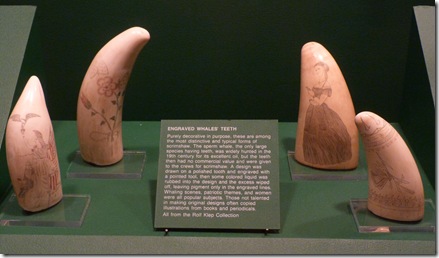 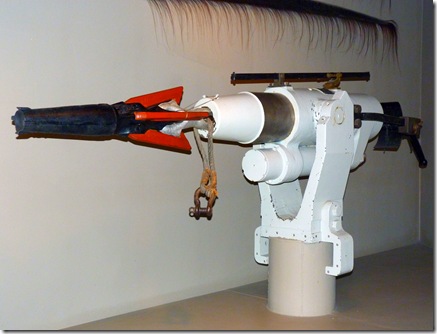 The museum also hosts traveling exhibits, and during our visit, one of these was Tattoo, The Art Of The Sailor, which told the history of tattooing and its connection to sailors throughout history.

Admission to the museum also includes a tour of the Lightship Columbia, a floating lighthouse that was stationed six miles off the mouth of the Columbia River for nearly 30 years, and is now berthed at the museum. Visitors are allowed to explore the lightship, from the crews’ quarters below decks to the bridge on top. 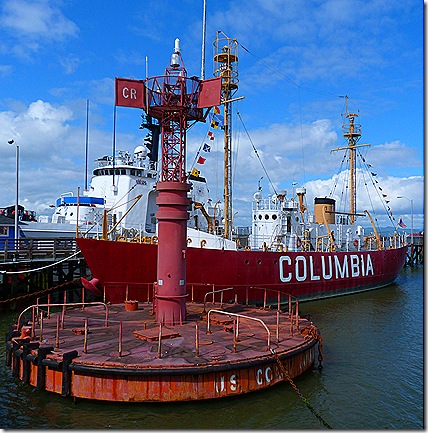 Miss Terry was really impressed with the all stainless steel galley. She’d love to have a kitchen like that in our motorhome!

I’m a landlubber. The one time I went deep sea fishing, I became the official “chummer” for the entire boat. But I love ships, and stories of the sea. And there is no better place than the Columbia River Maritime Museum to immerse yourself in the culture of the Pacific Northwest coast.

Thought For The Day -  It’s never too late to become what you might have been.