Yesterday was a day full of “wows.” We drove about 65 miles up the coast to Cape Blanco Lighthouse, and every curve in the road gave us a new and even more beautiful view that made us both say “Wow!”

There’s not a mile of the Oregon coast that isn’t beautiful, with the ocean surf crashing into the tall rock formations, called sea stacks, that are the trademark of the region. But I think the stretch of U.S. Highway 101 from the California border to Cape Blanco is the most breathtaking. 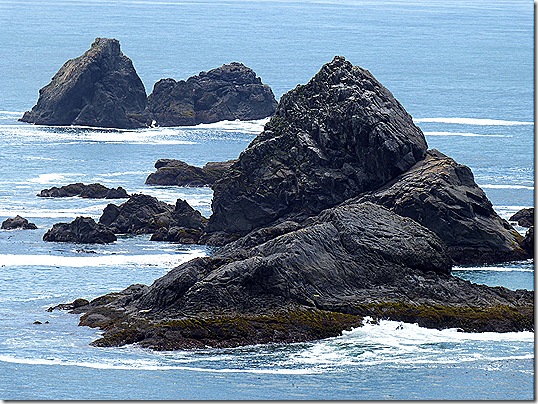 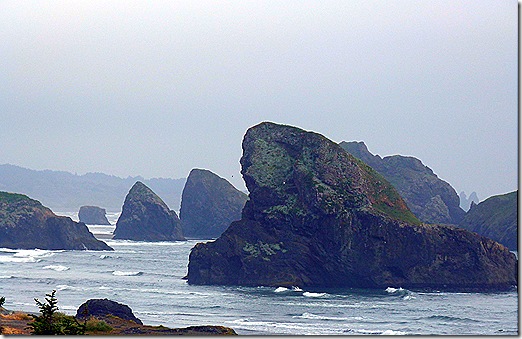 On the north side of Brookings, we stopped at Harris Beach State Park and walked down a rather steep, paved path to the beach, stopping to admire the wildflowers along the way. 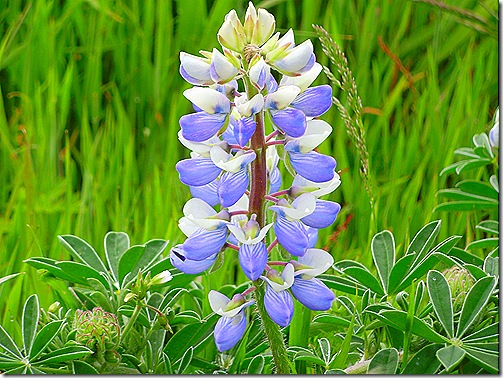 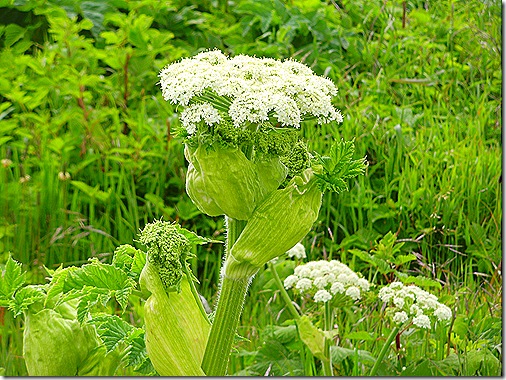 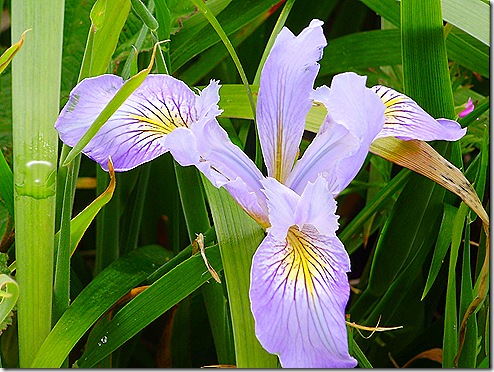 The beach was strewn with driftwood, and we spent some time just soaking up the ocean air and admiring the view. 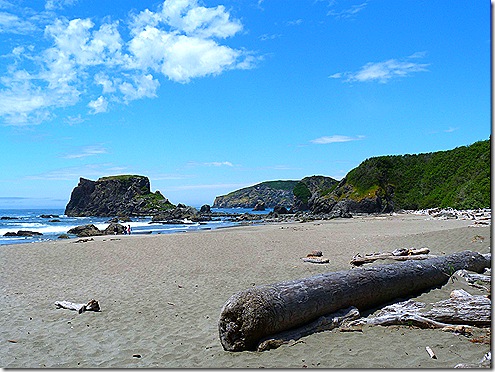 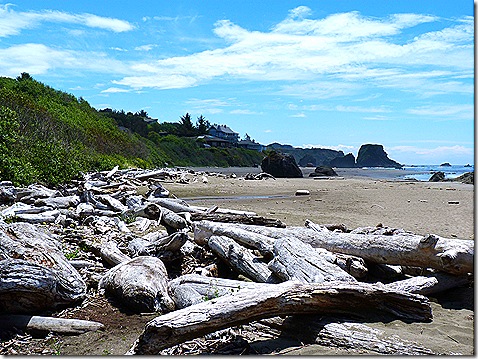 There are numerous viewpoints along the highway, and we wanted to pull into each of them, but if we did, we knew it would probably take us a week to get to Cape Blanco. 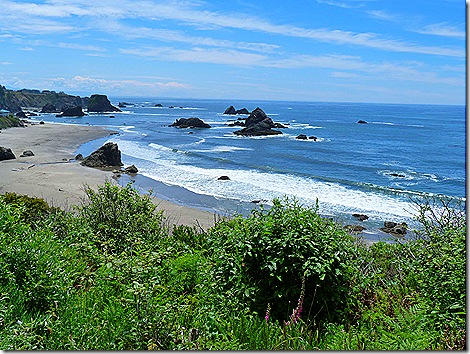 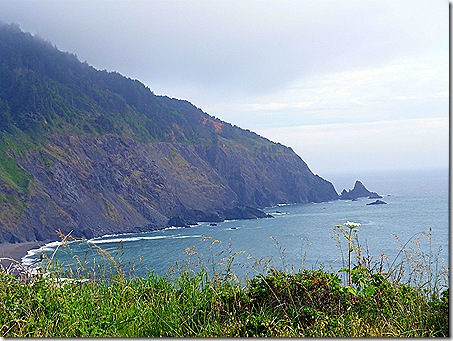 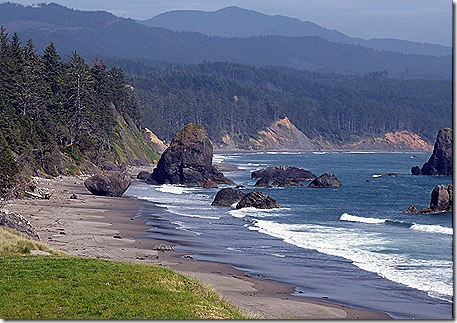 Many of the viewpoints had room for several RVs, and we saw everything from this small VW camper van, to large diesel pushers pulled over admiring the scenery. No overnight parking is allowed, but wouldn’t you love to just pull in and spend the day with a view like this? 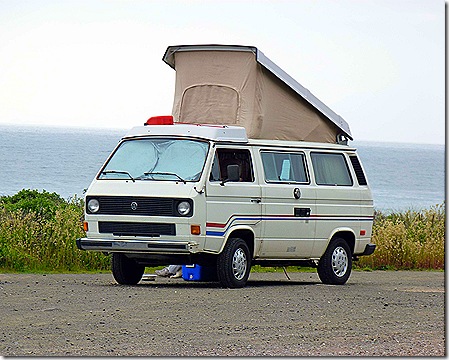 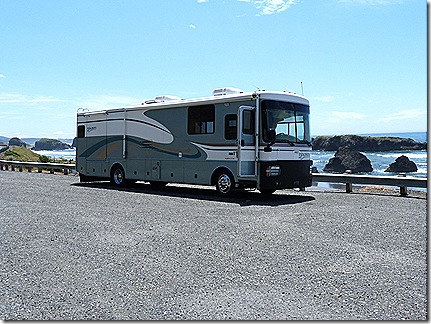 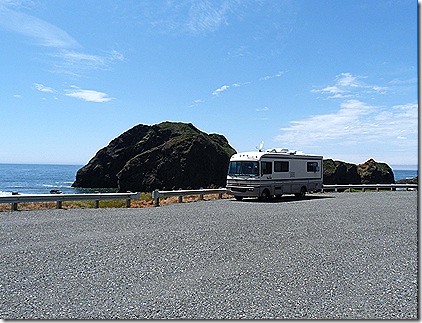 This handsome bridge crosses the Rogue River at Gold Beach, and I didn’t even snivel when we drove over it! It may be a different story when we’re in the Winnebago, sitting a lot higher! 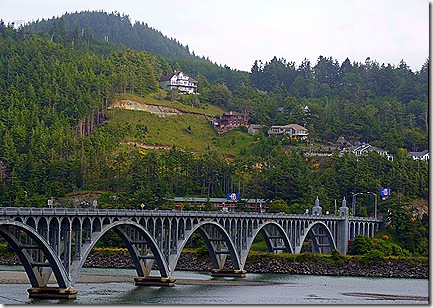 Don’t you wonder what stories this old hulk could tell? 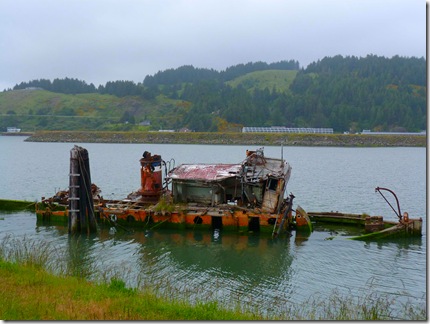 We were lucky to have a clear day with a bright blue sky. That doesn’t happen all that often along the coast. 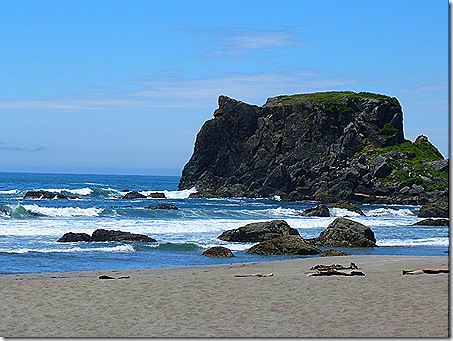 Commissioned in 1870, the Cape Blanco Lighthouse is the oldest standing lighthouse on the Oregon coast. We paid $2 each and took the tour, which included a climb up 67 winding stairs to the top, where the Fresnel lens still sends its signal up to 25 miles out to sea to help ships navigate the treacherous coastline. Between 1852 and 1950, at least twenty shipwrecks occurred between Cape Blanco and Port Orford, a few miles to the south, including the oil tanker J.A. Chanslor, which hit an offshore rock in 1919. Only three of the 39 people onboard survived. 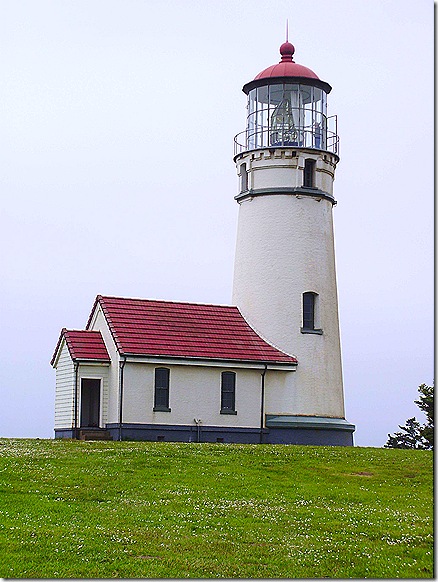 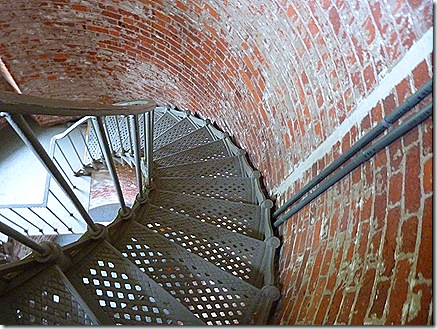 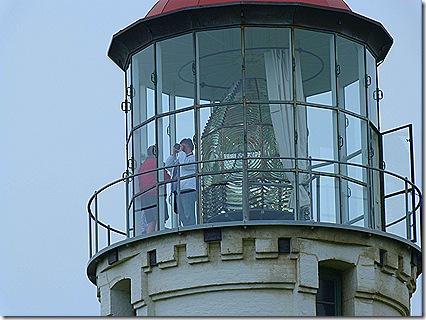 This volunteer tour guide at Cape Blanco Lighthouse is a fulltime RVer. We have met several RVers who volunteer at lighthouses. He and his wife work 20 hours a week in exchange for their RV site, and have the Pacific Ocean as their backyard! There are four RVing couples working at the lighthouse. If we were retired and had the time, I’d love to do something like that. 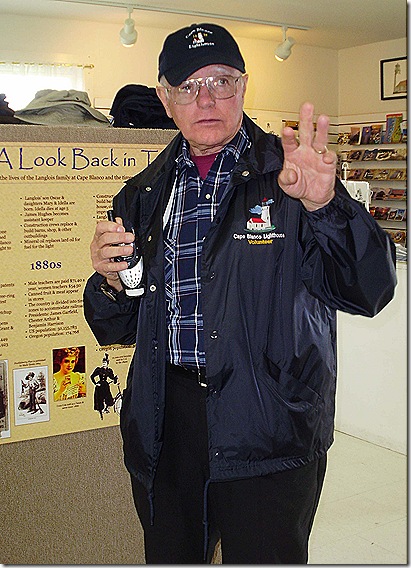 Climbing up all of those steps at the lighthouse worked up an appetite. What’s a guy to do?

Several people had suggested the  Crazy Norwegian’s Fish & Chips in Port Orfod, so after we left the lighthouse, we stopped for an early dinner. I had their signature fish and chips, and Terry had clam chowder and crab cakes. We both agreed that it was better than what we had the day before at the Sporthaven Marina in Brookings, which was delicious! There’s a reason Sunset magazine included this place in its list of the Top 10 Seafood Spots By the Sea. 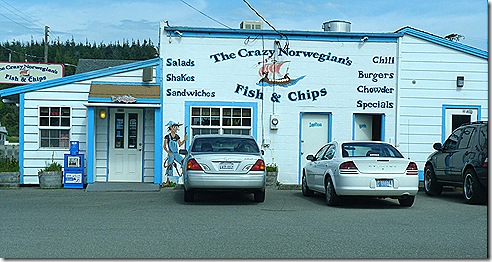 After we ate, we stopped at a small park in Cape Blanco that showcases Battle Rock, a rough island just offshore, where for two weeks in 1851, nine men held off a war party of local Indians until they could escape under the cover of darkness. 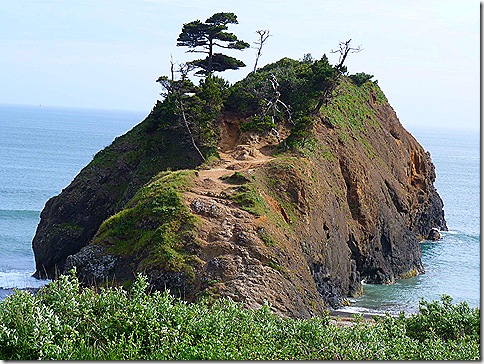 The fog began rolling in as we started the trip back to Brookings, but we still had to stop in a dozen or more places to check out the view and take pictures. 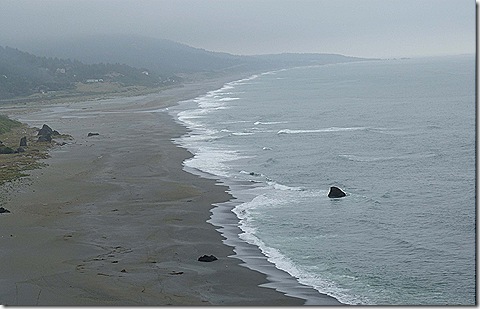 We got back to our motorhome at the Elks lodge about 7:30 p.m., tired but still in awe of all that we had seen in our “wow” day on the Oregon coast.

Thought For The Day – Being an Islamic terrorist is like being a Chinook salmon. Life is good until the Seals show up!