Yesterday was a rainy day here in Tillamook, Oregon. It started raining sometime in the wee hours of the morning, and it kept up all day long. Sometimes it really poured, and at other times it was more of a drizzle, or even a sprinkle. A typical Pacific Northwest coast day.

Which made it a great day to stay in our snug little home on wheels.We love traveling and sightseeing, but there are times when it’s nice just to shut out the world and have an “us” day at home, pretending that the rest of the world doesn’t exist, for just a little while.

We slept in, then stayed in bed snuggling for a while before we crawled out from under the covers to start our day. Which meant I had a ton of e-mails to deal with when I finally fired up the computer. After deleting, without opening, the obvious spam, and the junk mail forwards that so many people seem to have a real need to share with me, even when I ask them not to, the list of e-mails was more manageable, and I spent an hour or so answering the most pressing ones.

Miss Terry cut up the remainder of leftover steak from a couple of days ago and made me a steak sandwich for lunch, and we watched a couple of old movies on TV while she worked her way through a backlog of laundry from not having a full hookup RV site for almost two weeks, and then did some paperwork. While she did that, I updated our mailing list and got it ready to send to the mail service we’ll be using to send out the new issue of the Gypsy Journal when we get it back from the printer sometime next week.

With that chore out of the way, I spent some, time on the phone chatting with my friend Orv Hazelton, and then talked to Greg White for a few minutes. Greg just bought a Kindle from Amazon, and was having some problems getting it to work with his wireless router. I bought a Kindle myself a few days ago, and it took me a while to figure out how to make it cooperate with the security settings on my Cradlepoint MBR1000 router. But once I did, it works great. 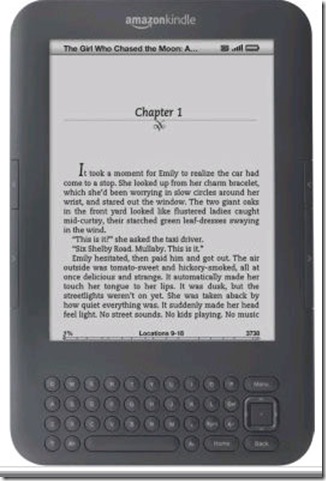 I had a first generation Kindle for a while, and found that I just didn’t use it as much as I thought I would. But now that I am publishing my own e-books for Kindle, I figured that I should get one, just to see how my books actually look on the Kindle screen. I have the Kindle app on my iPad, but there is a difference.

The selection of e-books available for Kindle is much bigger these days than when I had my first one, and the new generation of Kindles are much thinner and lighter. And a lot more affordable. Amazon actually has a new ad supported Kindle available that sells for just $114. That’s a heck of a price on an e-book reader! The traditional screen saver has advertising instead, and a small ad appears at the bottom of the page listing all of the books in your digital library. The ads are not intrusive, for those who are willing to deal with them, in exchange for saving some money on their Kindle. Check it out and see what you think.

After dinner, I formatted the digital edition of the new issue of the paper, and sent it out to our subscribers. I followed that up with renewal notices to the digital subscribers who are due.

If the weather clears up a little today, we want to run over to the Tillamook Cheese Factory and take their free tour. Well, yeah, we’ll probably buy some cheese and have an ice cream cone while we’re there too. Like they say, when in Rome….. 🙂

And before I close, let me wish a Happy Father’s Day to all of you dads out there. My father has been gone for 26 years now, but there’s not a day that I don’t appreciate the man he was, the father he was, and the role model he was. I love you Dad, and I miss you very much.

Thought For The Day – Those who live by the sword get shot by those who don’t.

5 Responses to “A Rainy Day In Tillamook”