Since the Oregon Thousand Trails preserves have not worked out for us, yesterday we drove 65 miles up the coast to Astoria, and then across the bridge to Washington, to check out the Long Beach Thousand Trails, which is actually in the little town of Ilwaco.

I don’t think you can find a mile of the Oregon coastline that isn’t beautiful. At every pullout along U.S. Highway 101, you are greeted with views like this. 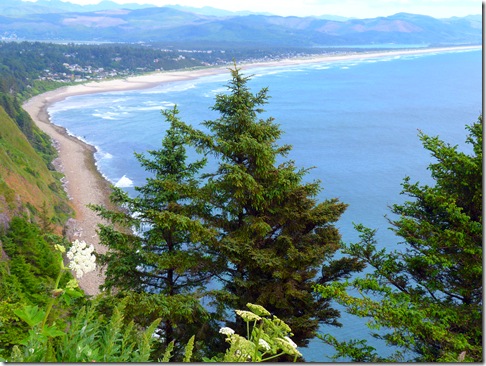 Or how about this view of Haystack Rock, at Cannon Beach? And almost all of the Oregon coast is open for public access, so everybody can enjoy it. How cool is that? 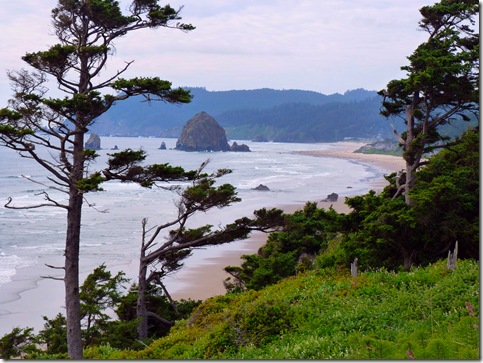 There are lighthouses all along the coast, and this one is unique. Tillamook Rock Lighthouse was called “Terrible Tilly” because of the severe weather conditions that constantly battered the small island it stands on, a mile or so offshore. It is not uncommon for high winds and waves to sweep anything not secured off the island and out to sea. The lighthouse was abandoned in 1957, and today it serves as a columbarium (a storage place for cremated remains). 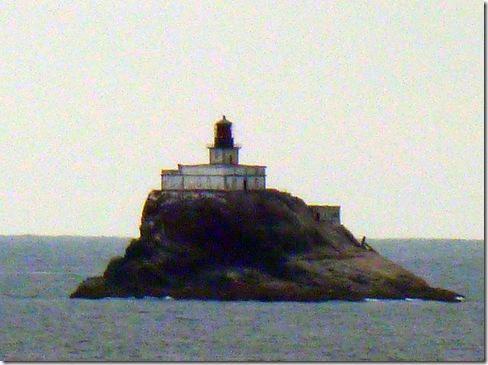 Most of you know about my fear of high bridges, so getting across the Astoria-Megler Bridge was not going to be the best part of my day. I’m not too proud to admit my shortcomings, and Miss Terry is more than capable of picking up the slack. So when we got to Astoria, she took the wheel and drove the Explorer over the bridge. 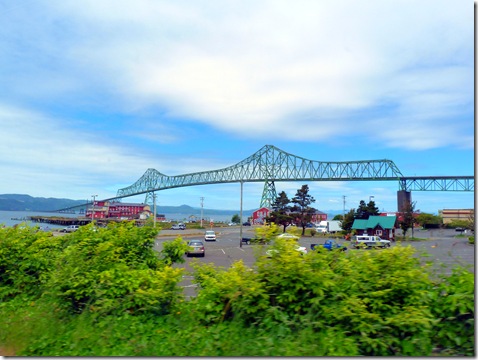 The bridge crosses the Columbia River, starting out with a long curving approach high above the river on the Oregon side, then it drops steeply down to just above water level, where it continues across to the Washington side. It’s just over four miles long, and two lanes wide. The higher portion is enclosed by a superstructure, and the downhill slope and the rest of he bridge just has side rails. 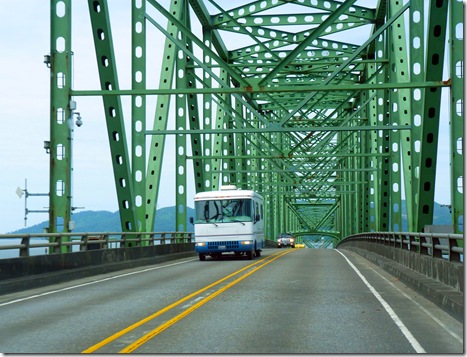 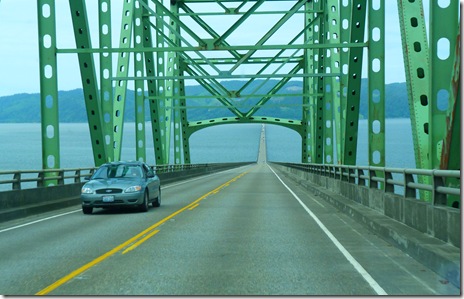 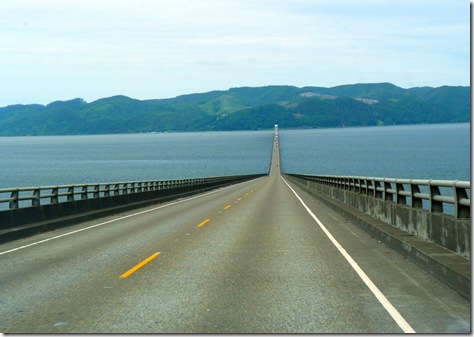 We drove into Ilwaco and checked out the Thousand Trails, and it will work for us. It’s not a very big place by Thousand Trails standards, with just 120 full hookup RV sites. But the location is great for exploring the Long Beach Peninsula, which boasts the World’s Longest Beach, and one of the few beaches in the country where you can drive on the beach if you want to, and aren’t afraid of getting stuck. 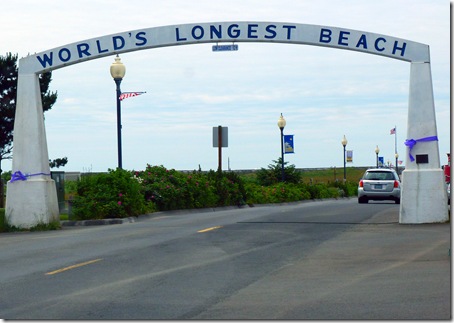 The folks in this motorhome wisely decided to stay on the packed roadway and not take their rig down onto the softer sand. 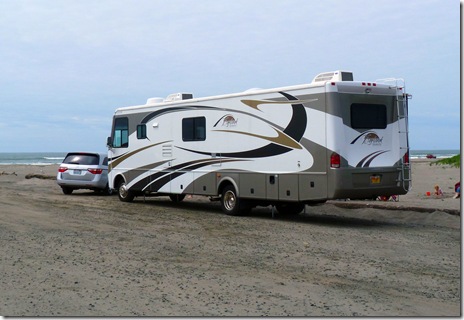 It was a chilly day, but we walked out on the beach for a few minutes, to take a few pictures, The cold water didn’t seem to bother these girls. 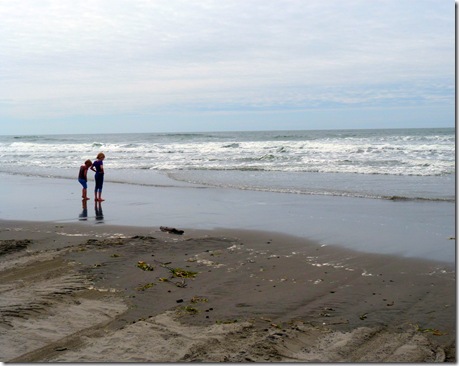 The community of Long Beach is a friendly little beach town, and we’re looking forward to spending a few days there.

We (Terry) drove back across the bridge to Astoria, and here are a couple of pictures of the bridge from the southbound perspective. 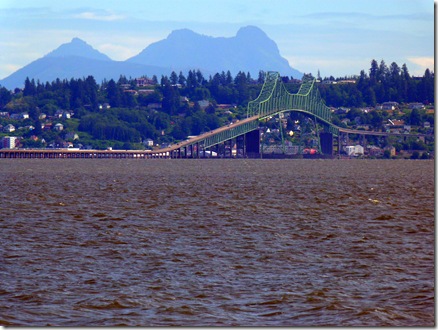 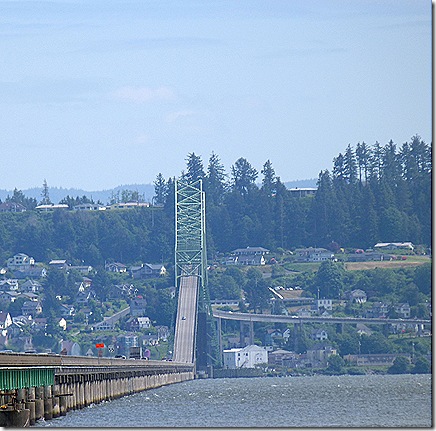 Back in Astoria, we stopped at one of my very favorite places in the whole world, Josephson’s Smokehouse. This business has been selling delicious smoked fish since 1920, and when I lived in the Pacific Northwest, I’d sometimes drive 100 miles to Astoria, just to stock up on smoked salmon, sturgeon, and oysters. And they even give you free samples of everything in the showcases to help you decide what to buy! Yummy! 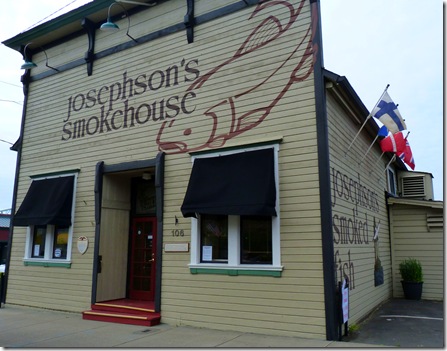 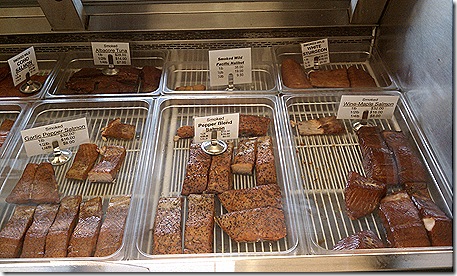 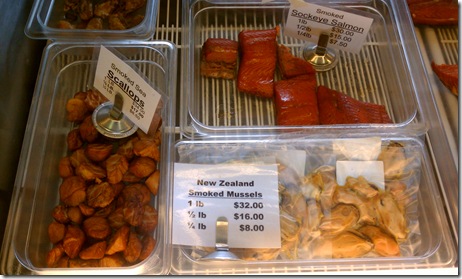 We bought some goodies to take home, and chatted with Andy, the friendly young man working behind the counter. We’ll definitely have to take our friends Greg and Jan White to Josephson’s when they catch up with us in Long Beach. I’m sure they’ll love it too.

Driving home, we stopped at a few pullouts to take some photos and admire the view, and then we got a phone call from our friends Tim and Sue Daugherty, who are reps for Sky Med at RV rallies around the country. They are staying at a Resorts of Distinction campground called Paradise Cove Resort and Marina, just a mile or so south of Wheeler, and called to tell us about it. As it turns out, we were only a mile or so north of Wheeler when they called! How’s that for timing?

Sue invited us to stop by, and in just a few minutes we were visiting with our friends in their beautiful Tropi-Cal motorhome, and I was getting all kinds of loves from Lucy, their furkid, who is almost like a real dog, only little. We visited with Tim and Sue for an hour or two, and then said our goodbyes and continued on to our home on wheels, at the Elks lodge campground just south of Tillamook.

It was almost 9 p.m. by the time we got home, and we were famished. Terry made us a light dinner of crackers, smoked Tillamook cheese, and smoked salmon and sturgeon. And we topped it off with some Ben & Jerry’s Cherry Garcia ice cream for dessert. The perfect end to a perfect day.

Thought For The Day – Just when the caterpillar thought the world was over, she became a butterfly!

12 Responses to “A Big Bridge And Smoked Fish”