Nick's Blog » Waking Up Is Hard To Do

I was minding my own business, all snug and cozy in my bed yesterday morning, when my phone rang, at 6:30 a.m. A call that early can mean only one of five things; it’s bad news, it’s a friend who is about to lose that status, it’s a wrong number, it’s somebody calling to sell me something, or somebody asking for money.

That early in the morning, it’s never good news! Publisher’s Clearing House has never called me at dawn to tell me they have a huge check for me and are on their way over to deliver it. Actress Meg Ryan has never woken me up with an early morning telephone call to tell me that she lusts after my body, too! The White House has never placed a call at that time of the day to tell me that they have decided that Bad Nick knows how to straighten out the mess inside the Beltway, and Air Force One is on its way to pick me up.

In this case, it was a recorded call from Prudential Insurance informing me that my car insurance renewal notice had been e-mailed to me, and I could pay online. Darn it, I was really hoping that it was that call from Meg Ryan! Hell, I’d have settled for Goldie Hawn, as far as that goes!

I tried to get back to sleep, but tossed and turned for the next couple of hours, and finally gave up. My buddy Greg White keeps telling me to just turn off the phone at night, but you can bet the first time I do that, Ms Ryan will call, and I’ll miss her!

I went through the motions of getting dressed and brushing my teeth, stumbled to my desk, and answered a few e-mails. I even read the e-mail from my insurance company with my car insurance renewal notice!

While I didn’t get much accomplished the rest of the morning, I did manage to at least look like I was doing something productive, just so Miss Terry wouldn’t feel like she was the only one working. I learned how to do that a long time ago.

About noon, I finally gave up on even pretending to work, and stretched out on the couch for a nap. I was just easing into dreamland when the phone rang again! At least this time it wasn’t somebody trying to sell me something or wanting money. It was my friend Orv Hazelton, calling to ask me if I had any recommendations for an RV park along Interstate 5 in southern Washington state. I didn’t, so I couldn’t help him. We seldom stay at a regular RV park, except for the occasional Passport America park. We usually find ourselves at a Thousand Trails campground, an Elks or Moose lodge, a fairgrounds with RV hookups, or one of the many free campgrounds located around the country.

Realizing that I must have done something to tick off  the gods in charge of slumber, I finally waved the white flag and actually did get to work, making a post to my self-publishing blog titled To Be A Writer, Be A Reader.  Then I did some more internet research on the areas where we will be traveling this summer, lining up stories for future issues of the Gypsy Journal. After that, I turned the computer over to Bad Nick, who posted a new Bad Nick Blog titled I’m Going To Miss You.

Besides a wide variety of birds here at the Escapees Park of the Sierras, we also have a lot of squirrels for neighbors. Now be nice, I didn’t mean Greg White! This furry little fellow was scampering around on a tree outside our motorhome, and posed for a photograph. 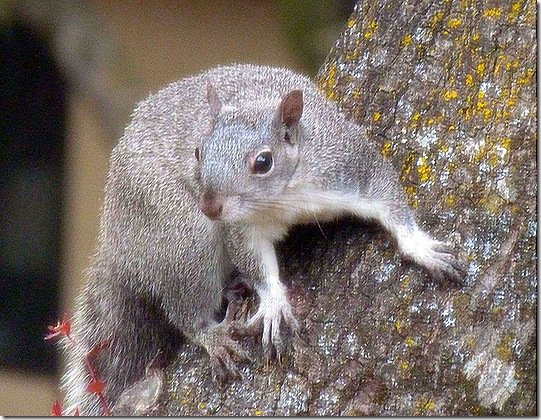 It looks like the bad weather has moved on eastward, and today we plan to drive up to Yosemite National Park to play tourist. According to the park’s website, the snowpack is 199% of average, and the rivers and waterfalls are spectacular. Miss Terry is taking her camera, so you can expect some great photos in tomorrow’s blog!

Of course, that means we’ll have to get up early again! Everybody tells me that it will be worth it, but I want a T-shirt or bumper sticker that says “I’d Rather Be Sleeping.”

Thought For The Day – Get the facts first. You can distort them later.

2 Responses to “Waking Up Is Hard To Do”