We never know where our next adventure is going to come from, but we always seem to find them. And occasionally, they find us!

The other day, we were visiting with our friends Rick and Laurie Phillips, whom we first met when we all were new fulltimers, a lot of years ago. Rick and Laurie have since hung up the keys, and now live in a nice fifth wheel trailer, here at the Escapees Park of the Sierras. For several years now, they have both worked at the Yosemite Mountain Sugar Pine Railroad, located in Fish Camp, about 25 miles north of Coarsegold. Rick gave us free passes to the railroad, and yesterday we drove up to Fish Camp to ride the train. 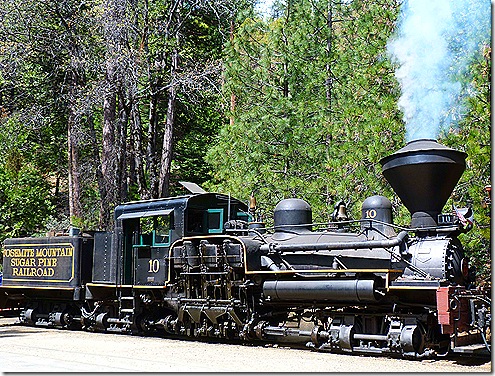 From 1899 to 1931, the Madera Sugar Pine Lumber Company employed over 800 men here, logging over 30,000 acres in the area, sawing over a billion and a half board feet of lumber. The company used wood-burning Shay locomotives to haul logs out of the forest over a network of narrow gauge rails. When they logged off an area, they would pull up the rails and lay them in a new direction to access uncut hillsides. 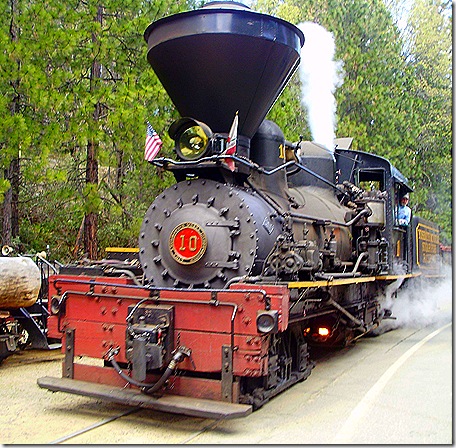 The company went out of business in 1931, a victim of the Great Depression, and the rails were pulled up for the last time. The area the company once clear cut is now heavily forested, and much of it is part of the Sierra National Forest.

In 1965, the Yosemite Mountain Sugar Pine Railroad was founded, restoring the old railroad roadbeds, and bringing the vintage locomotives and rail cars out of retirement to show visitors a look at a long forgotten way of life. Visitors climb aboard open or covered cars that have been converted from log haulers to passenger cars, and the old locomotive puffs and chugs its way along a four mile route, deep into the forest. 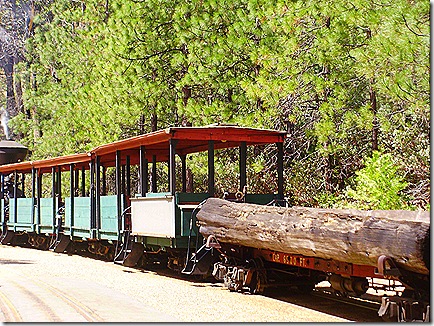 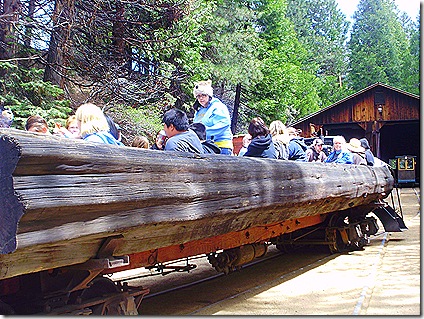 Our friend Rick was the conductor on our ride, and entertained the passengers with stories of the old logging days as we admired the beautiful forest scenery we were passing through. 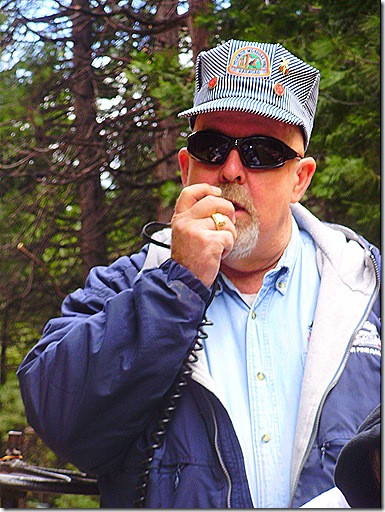 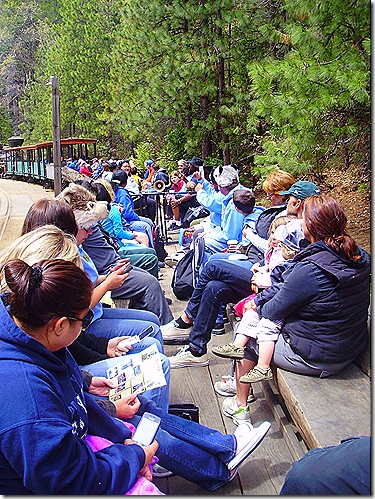 The old steam locomotive has been converted from wood burning to oil burning, using about 40 gallons of used motor oil and 400 gallons of water on each trip. Halfway through our ride, we stopped to take on water, and the passengers were allowed to get off the train and stretch their legs. Rick got permission for me to go up into the locomotive’s cab to check out the controls. The fireman explained how the engine worked, and I took this picture of the open burner. Keeping that fire going has to be a hot job in the summertime! 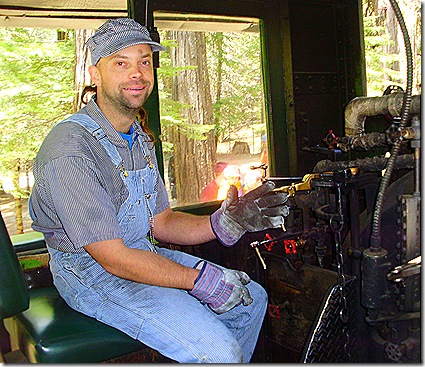 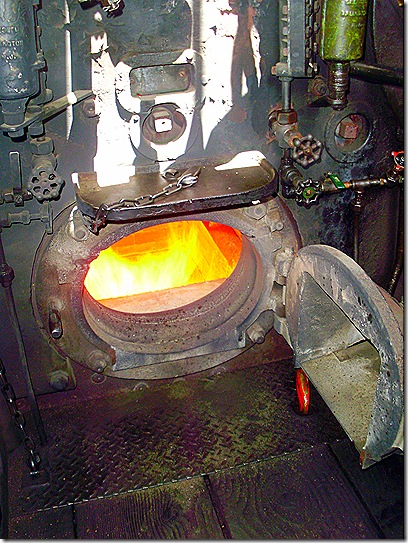 With the water tank filled, the engineer blew his whistle, Rick called “All Aboard!” and it was time for our return trip. 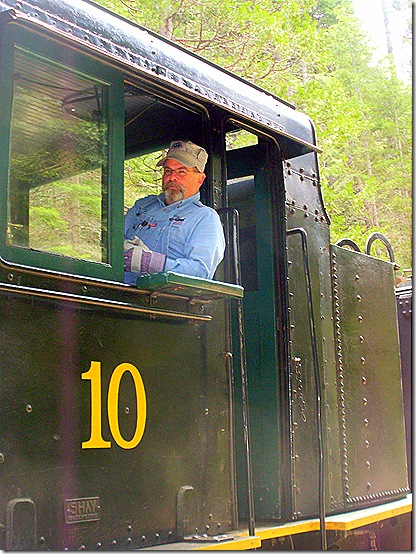 Can you tell Greg and Jan are having a good time? 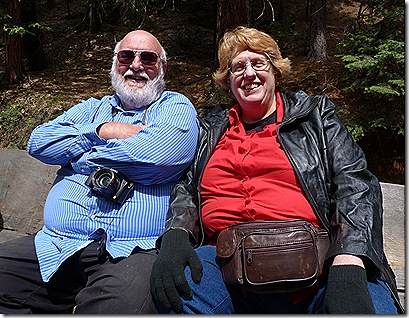 Back at the depot, we spent some time exploring the little Thornberry Museum, where Rick’s wife Laurie was working behind the counter. They have all kinds of old railroad and logging paraphernalia on display. 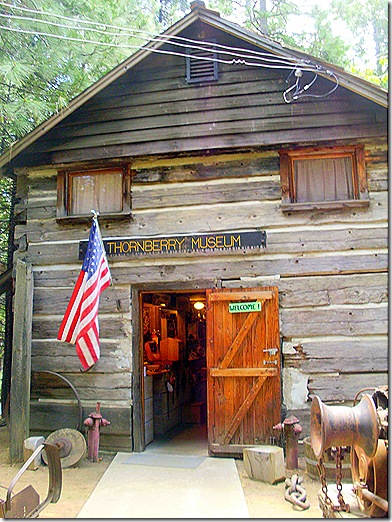 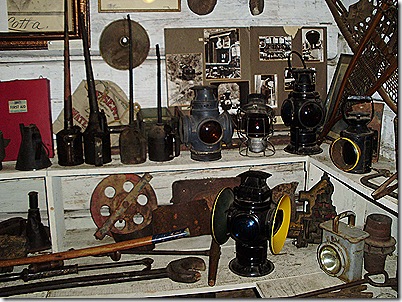 The great California Gold Rush happened here in the Sierra Nevada, and there’s still a lot of gold in them thar hills! If you’ve ever wanted to pan for gold, you can lean how at the railroad. An employees demonstrates the process at a sluice box, and modern day prospectors can keep whatever they find. There are just a few flakes in this pan, but I’d still be thrilled if I found them! 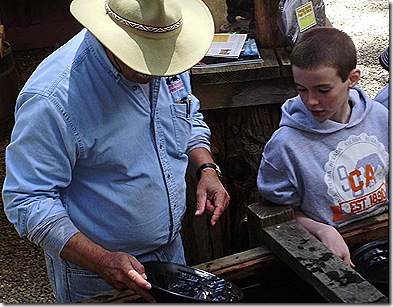 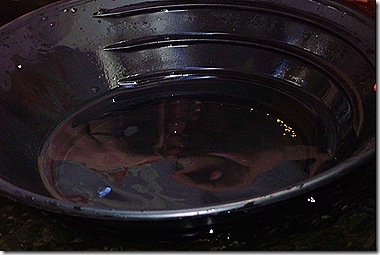 After checking out the bookstore, which had a nice selection of local history books, we poked around for a while, looking at the old railroad equipment.

This snow plow was attached to a locomotive, and used to keep the tracks clear during the harsh mountain winters. 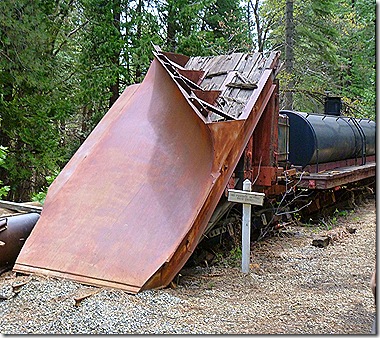 This 1959 locomotive has a GM diesel engine, and was used on the Durango & Silverton Railroad in Colorado. 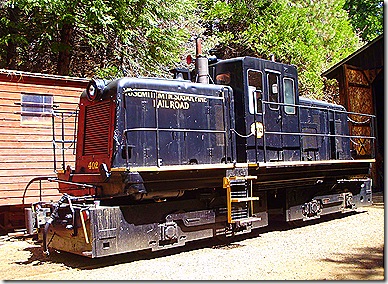 When we left the railroad, we stopped in Oakhurst for lunch, and then came back to the campground, where I promptly took a nap. Playing tourist is hard work, and a guy needs his rest! 🙂

Thought For The Day – As you get older, don’t slow down. Speed up, there is less time left!

5 Responses to “Riding The Rails”