Nick's Blog » Much Ado About Nothing

It was darned cold when we woke up at 7 a.m. yesterday morning, and when I poked a foot out from under the covers, all I really wanted to do was pull it back in, roll over and spoon Miss Terry, and sleep for another two or three hours! But alas, duty called.

Once I had done my duty, I got dressed, and poked my head outside, where I made short work of getting our motorhome unhooked from the campground’s utilities, then hurried back inside to warm up.

We pulled out of Canyon Gateway RV Park in Williams at 9 a.m. and headed west on Interstate 40. The strong winds of the last two days had died down, and we made good time. For the first 20 miles or so, a collection of classic cars and a Corvette club passed us, but most of them left the highway to get onto one of the sections of old Route 66 that still remains in northern Arizona.

100 miles after we got on the highway, we got off again, a few miles east of Kingman, because I wanted to get our Winnebago’s oil changed at the Speedco truck lube. We have never used Speedco before, but several RVers we know have recommended the nationwide chain, and I wanted to give them a try. I think this will be my first and last visit to Speedco.

I had called the day before, and confirmed that they serviced RVs with the Cummins ISC diesel engine, as their website says. But when we arrived, the first thing the slovenly fellow who came outside said was “We work on big trucks here.” I told him that I knew that, but it was my understanding that they also serviced RVs. Because we had never been there before, I wasn’t sure where to park, so I had stopped at the entrance to the parking lot to ask where to go. The fellow said “You have to move.” ”Okay, where do you want me?” I asked. ‘Just move,” he replied.

So I pulled into the parking lot, then walked back to Greg and Jan’s motorhome to tell them that it wasn’t looking too good. Before I got there, the same fellow was back outside yelling “You have to move that RV! We’ve got trucks coming in and out!” I walked back up to him, asked him again about getting a lube job and oil change, and he said it would be a while. When I asked him to define a while, he said “Maybe an hour, or an hour and a half. Maybe two. Maybe four. We take care of the truckers who have to make a living first. But you need to move your RV!” I didn’t see any trucks lined up for service, but given that attitude, no problem, I moved it right on out of their parking lot.

Well, I tried to. There were only two vehicles in the large lot, both employees’ cars, and neither was parked up against the building, but just sort of there in the front half of the parking lot. I could make a wide U-turn and get out, but the two cars were blocking my way. Three employees stood there smoking and watched me trying to get out. (Yeah, really busy taking care of those truckers, huh?) Finally I opened my window and asked if somebody could move one of the cars. A woman employee shrugged, got in one car, and pulled a couple of feet forward so I could narrowly squeeze through.

But then, she backed right back into the same spot and blocked Greg, who was following me! They ignored Greg as he tried to weave between the two cars, and though he missed them, he crunched the left front corner of his bumper trying to get out of the parking lot. Greg took it in stride, but I was really pissed off. Obviously, these clowns don’t give a damn about RVers’ business, so I wonder why they even list RV service on their website.

Back on Interstate 40, we cruised into Kingman, got off the highway on U.S. 93, and took it north toward Nevada. This is a nice drive, all four lane divided highway, and the views of the rock formations were awesome. 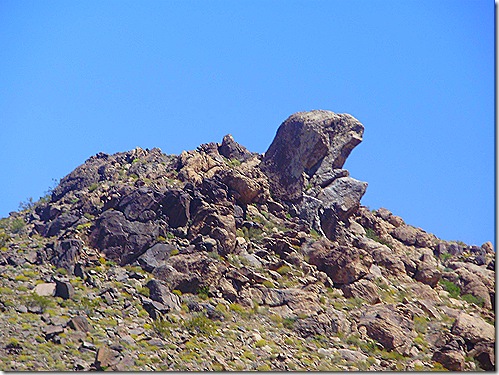 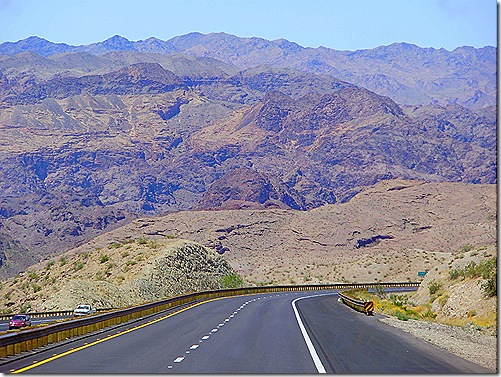 As we approached the Colorado River, the road had a lot of curves and downhill grades, but nothing to worry about, as long as you drive sensibly. 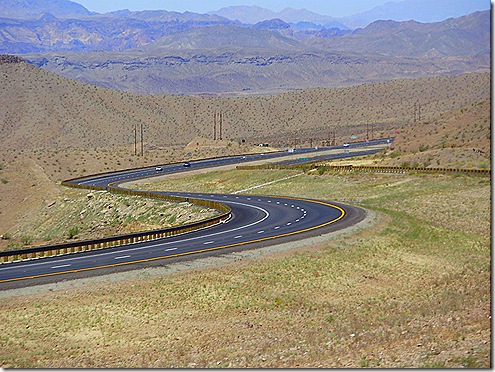 The wind had picked up as we left Kingman, and a couple of gusts really rocked our world. This old RV may have some years on it, but guess what? The view out the windshield’s the same as what the folks in the newest, most expensive luxury motorhome enjoys. 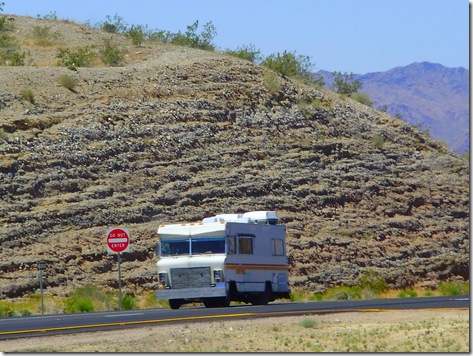 As most of you know, I have a real phobia about high bridges, so I was fretting about the trip over the new Hoover Dam bypass bridge that opened recently. Last year, we saw the bridge under construction from the dam, and I swore I’d never drive over it. 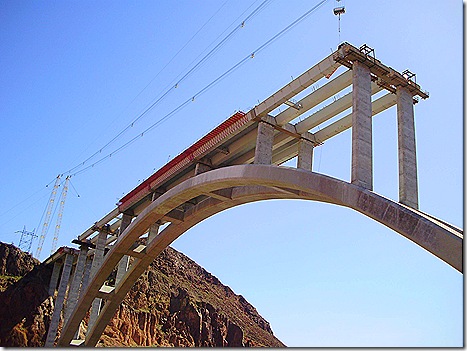 But several readers assured me that it was no big deal, because RVs are supposed to drive in the left lane, and high retaining walls block most of the view. Sure enough, all of my sniveling was for nothing. We were over the bridge before we even realized it, and it wasn’t as intimidating as many highway overpasses we’ve been on. Not nearly as bad as the Interstate 10 bridge in Lake Charles, Louisiana, and compared to the Mackinac Bridge in Michigan, it was like driving in a parking lot! So if you’ve been worrying about the bypass bridge, don’t even think about it. It I can do it, anybody can! 🙂 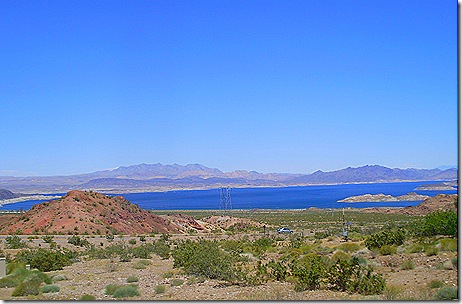 We passed Lake Meade, with its deep blue water, drove through Boulder City, and a half hour later, we were at the Las Vegas Thousand Trails preserve. The park is busy, and the RV sites are very close together, but we got a back-in 50 amp full hookup site, and had no problem getting parked and settled in. Except for the hassle at Speedco, it was an easy four hour, 211 mile run.

Greg and Jan are a couple of sites down from us, and once we were all parked and had time to relax, hunger set in. So we drove a couple of blocks to the Boulder Station Casino for a great buffet dinner. Then it was back to the motorhome for a quiet evening relaxing with TV and cruising the internet.

Thought For The Day – Family isn’t always blood. It’s the people in your life who want you in theirs, the ones who accept you for who you are, the ones who would do anything to see you smile, and who love you unconditionally.

18 Responses to “Much Ado About Nothing”