We had a lot of fun yesterday in Las Vegas, and didn’t spend a lot of money to do so. Yes, you can have fun in Sin City on the cheap!

The first order of business was to sleep in, making up for the rest we missed on our trip to Los Angeles. Then we spent most of the afternoon answering e-mails, logging in some orders, catching up on laundry, and other household chores.

About 4 p.m. we left the Thousand Trails with Greg and Jan and went to Jimmy Buffet’s Margaritaville restaurant in the Flamingo Casino. Greg and I are both huge Jimmy Buffet fans, and we enjoyed watching the singer’s videos on the huge screens mounted around the restaurant as we had our dinner. Here is a picture Miss Terry took of Jan, Greg and I. Don’t we look well fed? 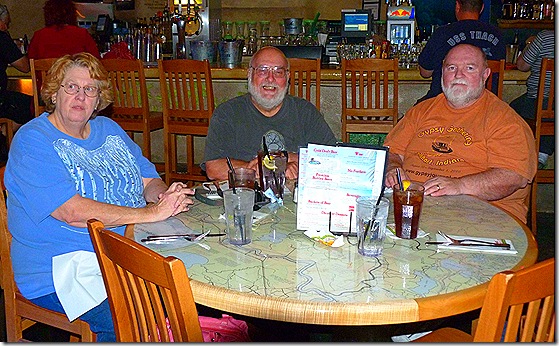 Besides the music videos, the restaurant also had live entertainment. I swore I fell in love with the pretty blonde dancer in the middle, but Greg and Jan were pretty sure it was just lust. I know I’m getting old, because I would just feel weird slapping a cute young thing like that on the rump and yelling “Who’s your Grandpa! Who’s your Grandpa!” 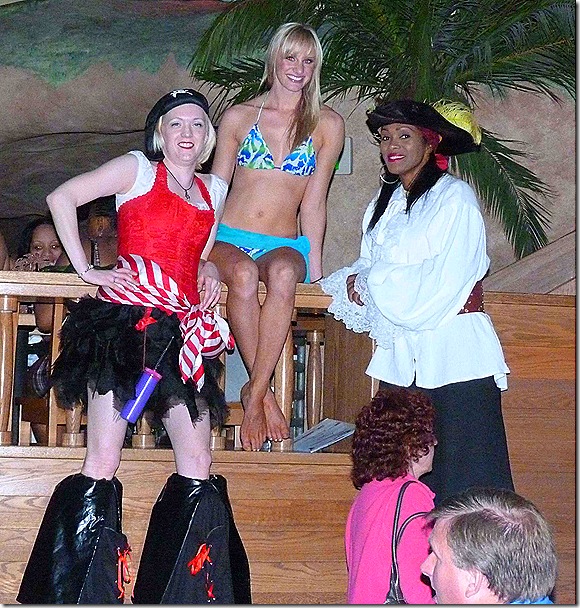 After dinner, we stopped at a Border’s bookstore, and I always enjoy killing an hour or two in a place like that, even if I don’t spend a nickel. Then we drove down the Strip to Fremont Street to watch the free Freemont Street Experience video show. If you haven’t been to Fremont Street, you really need to make a trip to Las Vegas. It’s really cool. They built a canopy over a couple of blocks of the old Glitter Gulch and play music videos on it. The canopy is longer than five football fields, and has over 12.5 million LED modules. Watching the old 1970s hit American Pie on the canopy screen is awesome. There is no other word to describe it. 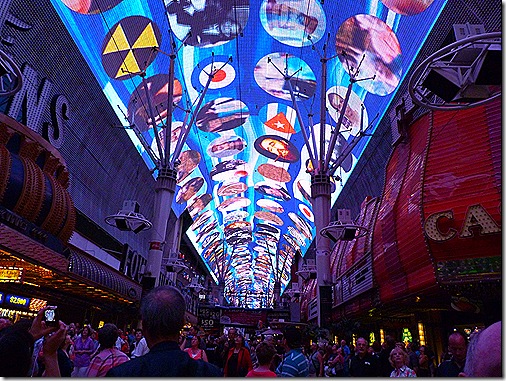 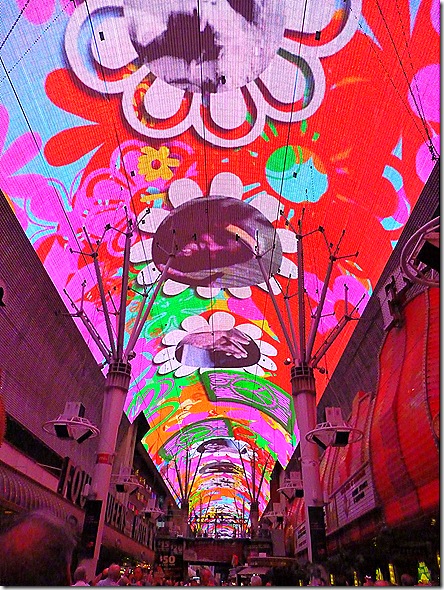 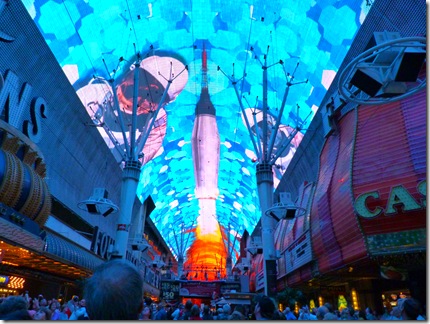 A new addition to Freemont Street is the Flightline, a zipline that carries people 800 feet down the street from lines suspended between two elevated platforms. Passengers soar above the crowd at up to 25 miles an hour. 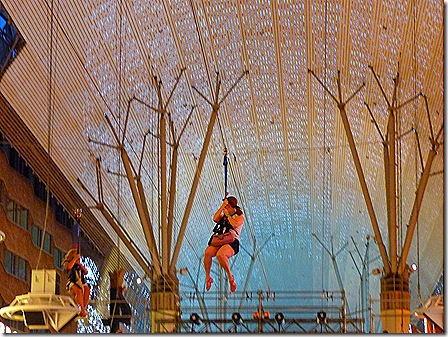 Greg said he would try that in a heartbeat, and Jan and Miss Terry quickly agreed. I said with my luck, I’d get stuck halfway and just dangle there. We all got a laugh out of that, but darned if a young woman didn’t do exactly that just moments later! One of the workers had to come out and pull her in, but she seemed to enjoy her ride, even with the delay. Greg, Jan, and Terry say they plan to do the zipline on our next trip to Las Vegas. 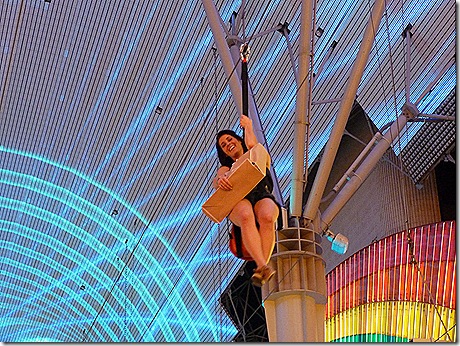 We left Freemont Street, driving back down the Strip and enjoying all of the neon signs and bright lights, as well as people watching. You never know what you’ll see on a Las Vegas sidewalk! 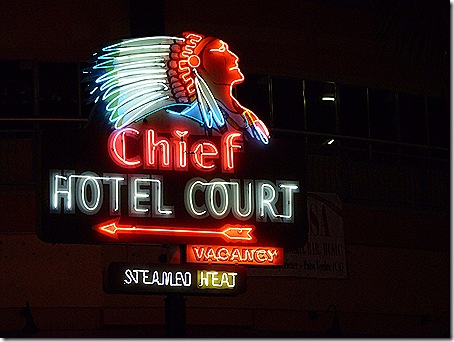 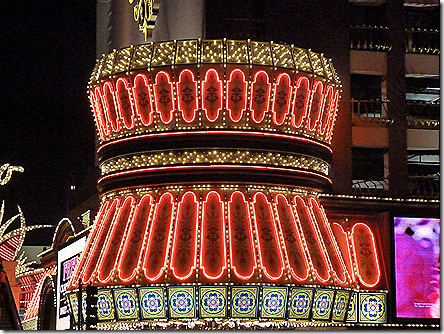 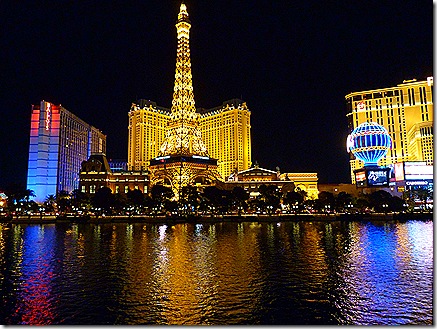 Our destination was the Bellagio Casino, where we watched the amazing  show of water, music and light called the Bellagio Fountains. Water shoots upward and twists and turns in time with programmed music, in a dance that is simply amazing. It was absolutely beautiful, and the show was a highlight of our evening. It was just as impressive as the Freemont Street Experience, and that says a lot! The show started anew every 15 minutes, with different music reach time. We watched three different performances, and each one was better than the one before! And it’s all free! 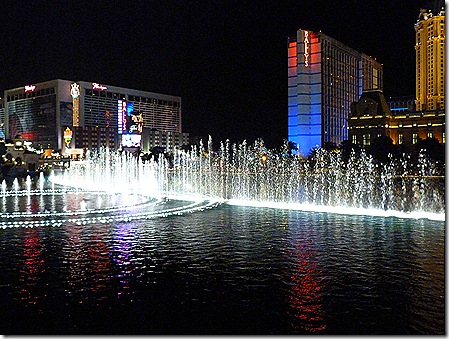 After watching the water show, we wandered through the casino, admiring the beautiful flower arrangements and butterfly garden for a while. This is one of the classiest casinos in Las Vegas, in my opinion.

After another ride down the Strip, we found an open restaurant a few blocks away from all of the action for a late night snack, and then returned to the campground. We had been out over eight hours, never dropped a nickel in a slot machine, and had a wonderful time enjoying Las Vegas on the cheap.

Thought For The Day – I don’t have an attitude problem … you have a perception problem.

9 Responses to “Las Vegas On The Cheap”