After I wrote in yesterday’s blog that we are at the Las Vegas Thousand Trails preserve, a blog reader said that they had only been here once, and left after two days because the RV sites are crammed in so close together, and this isn’t their idea of camping.

There is no question that this is a very cramped, crowded RV park, as these photos show. Yesterday I sneezed, and the folks in the motorhomes on both sides of us said “Bless you.” If I wanted to borrow a cup of sugar from a neighbor, I could just open the window, reach out, and take it from his kitchen table. So no, this isn’t camping. 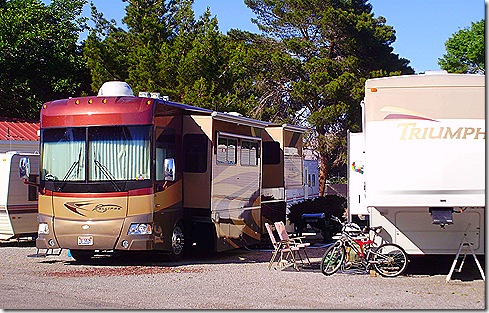 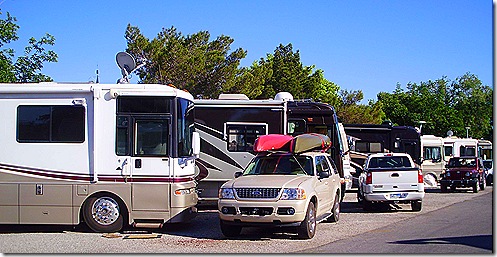 We are not campers. We are fulltime RVers. The day after I got out of high school, my uncle took me on an extended camping trip. It lasted fourteen months. I swore back then that if I ever got back home again, I’d never go “camping” again. I had my share of sleeping on the ground, in the mud, while the mosquitoes and leeches fought over my blood. Nope, I’m not a camper. My definition of roughing it is black and white TV!

And while we do prefer to have roomier campsites, we’re not here for the ambience. We’re here to visit Las Vegas. Compared to the close confines of a Las Vegas hotel room, and the high cost, we are living good! We have a 50 amp full hookup RV site, and we’re far enough away from the Strip and all of the activity to relax, but still close enough to go downtown and take in all of the sights.

Last night, we did just that. Greg drove while Jan, Terry, and I just enjoyed looking at all of the bright lights and the folks out having fun. You can see anything in Las Vegas, and whether you’re looking for a cheap wedding, a steak dinner at 3 a.m., or a 24 hour tattoo shop, it’s all on the Strip. When they ladies saw the name of this business, they told Greg and I that we take them to all of the finest places. Well, yeah! 🙂 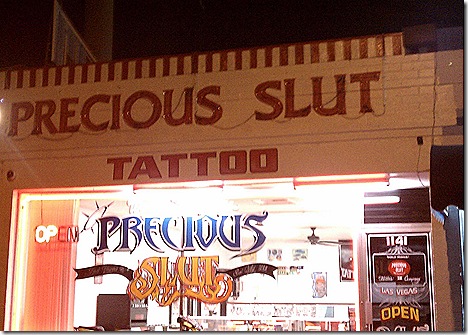 After a stop at Dairy Queen for a much overdue milkshake, we returned to the Thousand Trails, where we watched the news reports of the American attack that killed Osama bin Laden, and I downloaded the saved favorite locations from our older Garmin Nuvi GPS onto the new Garmin 465T trucker’s GPS we bought a couple of months ago. The more I use the 465T, the more I like it. I’d recommend it to anybody who drives a motorhome or tows a big trailer. These days, the older GPS stays in our Ford Explorer, and we rely on the 465T when traveling in the Winnebago.

Once I was done with that, I had to relinquish the computer to Bad Nick, who just had to respond to the news of Osama bin Laden’s death by posting a new Bad Nick Blog titled Rest In Hell, bin Laden. Check it out and leave a comment.

Thought For The Day – If you don’t want the truth, don’t ask me. If you want something sugarcoated, go eat a donut.

10 Responses to “It’s Not Camping”