Nick's Blog » I Should Have Stayed In Bed

Yesterday was a day when I should have stayed in bed. I went outside to dump our black tank, and because the RV sites here at the Las Vegas Thousand Trails preserve are so tight, I had to wiggle my chubby butt between a picnic table and the side of our RV. Then I discovered that our bay doors were locked, so I had to wiggle my chubby butt  back between the picnic table and the side of the RV, reach inside our motorhome’s door to push the electric bay door lock release switch, then wiggle the aforementioned chubby butt back between the RV and picnic table a third time. About then, I said to myself “Self, why the hell don’t you walk around the other side of the RV, and not have to squeeze through here over and over again?” Hmm… there’s an idea!

Anyway, I opened our sewer bay, and the door promptly came down and thumped me on head. Dang, that hurts! 🙁  I pulled the black valve, and the hose elbow immediately jumped out of the rubber sewer donut the campground requires, spewing a mess out. It happens to all of us sooner or later. Welcome to life in an RV.  I quickly turned to push the black tank valve closed, and bay door came down and hit me on the head again! Dang, that still hurts! 🙁

Of course, I can dump my tanks a thousand times without a mishap, and nobody is ever there to witness it. But when something goes wrong, there’s always an audience. This time, it was a nosy lady with a yappy little dog in a site behind us, who said “That’s disgusting!” Yeah, I know. As I started cleaning up the mess, she told me how I was polluting the groundwater table, and should report the spill to the EPA.

“If you used a macerator, that wouldn’t happen!” she told me.  About then, Bad Nick really wanted to point the errant sewer hose at her, pull the valve again and say “If you weren’t such a busybody, this wouldn’t happen!” But Good Nick wouldn’t let him do that. Sometimes Good Nick is such a party pooper. Pun intended. 🙂

With the mess cleaned up and the dumping chores done, I went back inside (forgetting to walk around to the other side of the RV, and instead squeezing my chubby butt between the RV and the picnic table), and took a shower.

I worked on the computer for a while, and then about 2:30 we rode with Greg and Jan down to our mail service in Boulder City to pick up a couple of week’s worth of mail, and some packages we had sent in by UPS. On the way, we stopped at Camping World, and after we left the mail service, we had an early dinner at Lindo Michoacan , a great Mexican restaurant we discovered on our visit to Las Vegas last year. The food was delicious, and the view out the windows toward the city were fantastic. We made one more stop, at Fry’s Electronics, and then headed back to the campground.

Before we went back to our campsite, I took a picture of the bus conversion I mentioned yesterday. I thought it was an old GMC Scenic Cruiser, but Terry pointed out that it is actually a Flexible Starliner, another great old coach from the glory days of bus travel. 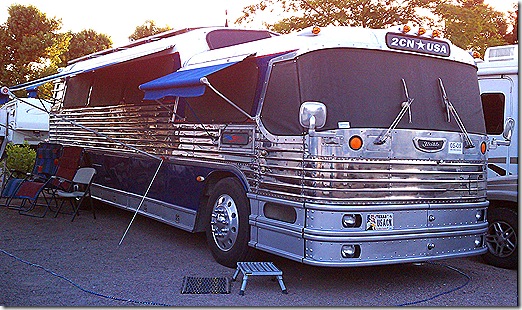 About 9:30 I realized that we were out of milk, and knowing that Good Nick can turn to Bad Nick pretty quickly if he doesn’t get his Frosted Flakes in the morning, we ran to WalMart, a couple of miles down Boulder Highway. The store wasn’t all that crowded, but of course, we had to get in line behind a fellow who’s credit card was declined, and he kept insisting that there must be a problem and telling the checkout clerk to try it again, and she did, over and over, with the same results. So he had her try another card, which was also declined. Finally we took our stuff back off the counter and went to the next checkout. I swear, I could have bought a cow and milked it myself in the time it took to get out of that place!

You’d think that would be enough frustration for one day, but you’d be wrong. As they say in those late night infomercials, but wait, there’s more! When we parked the Explorer in front of our motorhome, as I was walking past, I scraped a couple of layers of skin off my head on the rearview mirror of the RV! Dang, that hurts! 🙁

Yep, I should have stayed in bed!

Thought For The Day – Beauty fades, but dumb is forever.

17 Responses to “I Should Have Stayed In Bed”