Okay, I was wrong and Jan White was right, and I publicly admit it. But I have to tell you, it’s really hard to do that.

Jan is a fan of the CBS daytime television show The Talk, starring Sara Gilbert, Leah Remini, Sharon Osbourne, Julie Chen, and Holly Robinson Peete, and a couple of weeks ago, Jan suggested that we all get free tickets to a taping of the show. I wasn’t thrilled with the idea because A) It’s held in Los Angeles, B) I’m a guy, why do I want to go watch a televised hen session? C) We would have to get up really early in the morning to be at the studio on time, and D) Did I mention that it was in Los Angeles?

But, after a lot of whining, sniveling, crying, and pouting, I finally agreed to go, because I am nothing if not flexble. Well, that and because Miss Terry wanted to go, and said I could either go with her, or stay home alone. That’s not a good idea. I’d probably play with matches or something. Besides, who would feed me while she was gone?

Well, all of that, and because Jan said sometimes they give the audience really cool gifts, including things like digital cameras and iPads. Hey, I could use a new iPad.

So Tuesday we left our motorhomes at the Thousand Trails and rode with Greg and Jan to Los Angeles, about a five hour drive, including a couple of potty stops. Passing through Baker, California, Miss Terry took this picture of the World’s Largest Thermometer, which is actually a 134 foot tall electric sign, paying tribute to the record 134 degree temperature in nearby Death Valley in July, 1913. 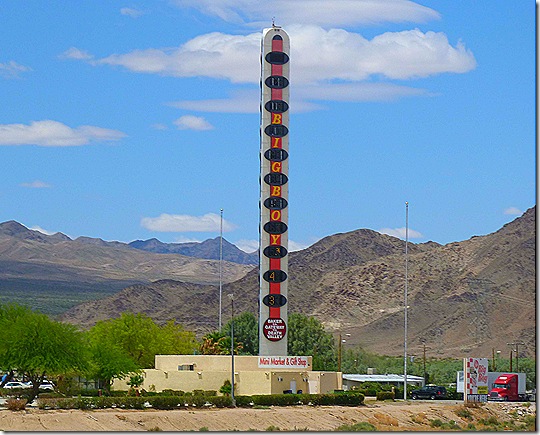 We got to Fullerton, California, checked into our hotel, and then drove another 10 miles or so to a Mexican restaurant called Esther’s that Greg and Jan fell in love with on earlier visits to the LA area. Oh goody, I have to go to California, get up early, and eat Mexican food! It just keeps getting better and better! 🙁 It’s not that I don’t like Mexican food, it’s that since I am allergic to onions and refuse to eat vegetables out of principle (If one vegetable makes me sick, I don’t like any of them. It’s kind of like a family feud, if your cousin hurts me, I don’t like you either!). 🙂 So I have very few choices at a Mexican restaurant. I go because Miss Terry, Jan and Greg want to go. Again, I’m nothing if not flexible.

Actually, my quesadilla was excellent, and Miss Terry said that her chili relleno and cheese enchilada were the very best she has ever had. Terry is a real snob when it comes to Mexican food, so that’s quite an endorsement.

Next, we battled miles of LA traffic to drive into Studio City to check out our route for the next morning. We even saw the famous Hollywood sign along the way. Los Angeles is way too busy for me, and I’m glad Greg was driving because I couldn’t have handled it. 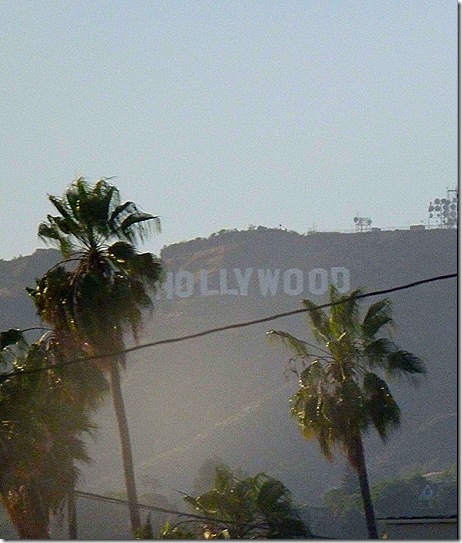 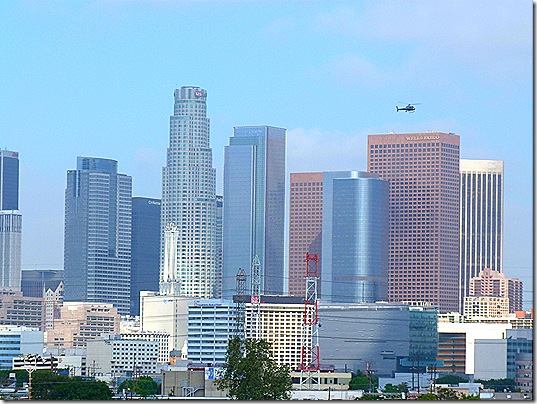 Then we drove to Hollywood to check out all of the action there. Here is Grauman’s Chinese Theatre on Hollywood Boulevard, complete with a Mary Poppins lookalike standing on the sidewalk, offering to let you have your picture taken with her for a couple of bucks. We also saw an Elvis impersonator, and two Spiderman wannabes. I think I saw some woman wannabes too, but I wasn’t getting my picture taken with them! The last time I did that, it was used as evidence in one of my divorces! 🙂 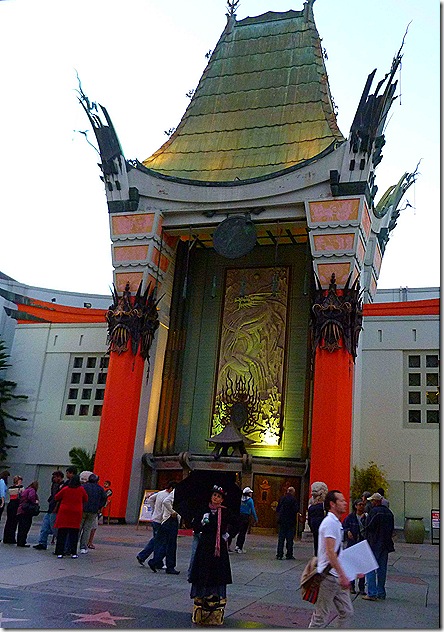 We also saw Madame Tussauds Wax Museum. I say saw, because we didn’t stop. It was late and we were tired. 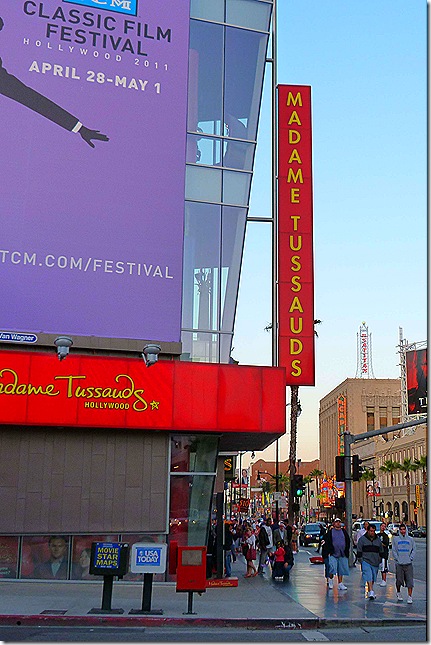 Yesterday morning, I was up before 7 a.m. (Yes, I do make sacrifices for the people I love), and we drove 40 miles through rush hour traffic to get to the studio a little after 9 a.m. Greg did an excellent job of planning the route and getting us there in one piece. He’s my hero.

We gave our names at check in, then were herded into a waiting room, where we signed a release saying we wouldn’t sue CBS, the studio, the show’s cast, writers or directors, the guy who empties the trash, the man who painted the stripes on the highway, and some fella named Fred, if we died, lost a limb, threw up, got bored, or committed suicide during the taping. That done, we were led a block or two away to the actual studio, where we waited in line some more, and then were finally let in.

Since no cameras were allowed, I can’t show you what the studio or set looked like, but it was interesting watching the taping. They had a couple of guys whose whole job was to get us pumped up and applauding wildly for the cast when they came on stage, and at every break in the action. I was surprised that most segments only last about 5 to 7 minutes, and then there was a break while staff members rushed onstage to touch up makeup, fluff hair, and move furniture around.

Of the cast, Leah Remini interacted most with the audience during the breaks, Sara Gilbert and Sharon Osbourne to a lesser extent, and the other two almost not at all. The main guest was Alex Trebek, host of the game show Jeopardy. He didn’t interact with the audience at all, and as soon as his segment was over, he was gone.

They also had Megyn Price from the sitcom Rules of Engagement, who was actually taping a segment for next Tuesday’s airing of The Talk.

Yesterday’s other guest was  Ellen Kunes, who wrote The Carb Lovers Diet. Every audience member got an abbreviated pocket guide to the book, a selection of fragrances, and a one year subscription to Redbook magazine. Huh? Perfume, a diet book, and a women’s magazine? Where the hell is my iPad or digital camera? Oh, Jan you done me wrong!

But even so, it was interesting to see how a television talk show comes together, and if I really had to, I’d go again. It was fun.

We left Los Angeles about 2:30, made a couple of stops on the way home, including for dinner at an excellent place, called Peggy Sue’s Nifty 50s Diner in Yermo, and got back to the campground about 9:30. It sure was good to be back in our home on wheels!

So yes, I did have a good time. Jan was right and I was wrong.

But I still want my new iPad! 🙂

Thought For The Day – If one synchronized swimmer drowns, do the rest drown too?

5 Responses to “Hooray For Hollywood”