Yesterday I managed to break the nasty cycle of getting up way too early in the morning, and I think I may be on the road to recovery. We slept in, then stayed in bed snuggling and having some quiet time together. These are the moments I cherish most between Terry and I.

We finally got up, I answered a few e-mails, checked Dennis Hill and Don and Sharon Del Rosario’s blogs to see where they are on their RV trip to Alaska, and then decided it was time for a nap. Well, actually, I sat down on the couch to read a book, and my body must have decided it was time for a nap, because the next thing I knew most of an hour had gone by, and Greg White was calling to see if it was a good time for him to come over and check out our leaking black water valve. Let’s see, have Greg work on a nasty job for me for free, or wait and pay an RV tech big bucks later on? Yeah, Greg, come on over! 🙂

For a while now, we have had an intermittent leak from our black water valve, and since Greg replaced the valve on his American Eagle motorhome back when we were in Tucson, he thought it wouldn’t be a huge task to do ours too. Well, maybe. On Greg’s motorhome, the valve and handle were all one unit, but on our Winnebago, the handle actually connects to a cable that runs back about 20 inches or so, to the valve itself. It sort of looks like the cable on a motorcycle clutch or front brake, and it looked like the cable was stretched out and bad. But, unlike a motorcycle cable, which can be shortened, we didn’t see any way to shorten this one.

We studied it for a while, and then called my pal Ron Speidel, who knows more about Winnebagos than anybody outside of the factory in Forest City, Iowa. Ron gave us some input, and we all agreed that maybe the valve itself isn’t the problem, just the cable. Now I need to find out if the cable can be ordered as a separate item, or if it comes together with the valve as a single unit.

While we were busy with that, Miss Terry was doing paperwork, logging in some recent orders, and also managed to get some pictures of the finches feeding near our RV site. 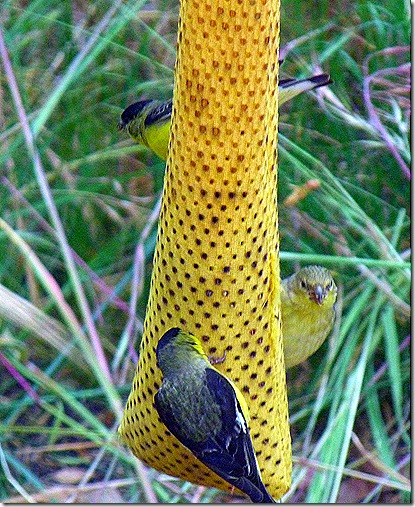 I’m not sure if this is the same Acorn woodpecker I had in yesterday’s blog, because they are everywhere here at Park of the Sierras. 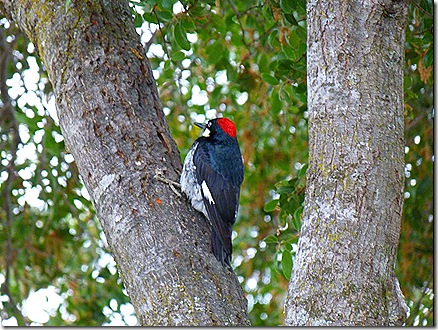 About 4 p.m., we left the campground and drove to Oakhurst to make a bank deposit, and then met our friends Dave and Lynn Cross at a Mexican restaurant called El Cid. When Greg and Jan were here last year, they ate at El Cid several times and were impressed with it. Maybe it was because of the great meals they had at La Fonda in Camp Verde, Arizona, and Esther’s Taco House in Placentia, California since then, but Greg and Jan both said El Cid just wasn’t as good this time around. Miss Terry agreed that while the food was okay, it wasn’t a place she’d go out of her way to return to. Not that it wasn’t good, it just wasn’t as outstanding as what they serve at La Fonda or Esther’s. But we had a nice window seat with a great view,and it was fun to have some time to visit with Dave and Lynn, so we had a good time.

The temperature had really dropped while we were in the restaurant, and it started to rain about the time we got back home, and continued all night. It looks like the next couple of days will be the same thing. As cold as it is, I wouldn’t even be surprised if we saw some snow! That would not be a good thing. In fact, if it does snow, I may just stay in bed until it warms up.

Thought For The Day – Funny, I don’t remember being absent minded.

2 Responses to “Breaking The Cycle”