It had been way too long since we we had seen my daughter Tiffany and her family, so yesterday morning Terry and I were up bright and early for a road trip to our old hometown of Show Low, Arizona.

We left the Verde Valley Thousand Trails preserve about 9:30 and followed State Route 260 east through Camp Verde, and started the long climb up to the Mogollon Rim. The elevation at the Thousand Trails campground is about 3300 feet, and we climbed to over 7,000 feet in the next 40 miles.

We started out in high desert country, with flat topped mesas, and as the road climbed and wound around the sides of the mountains, we began to see thick forests of ponderosa pine trees. 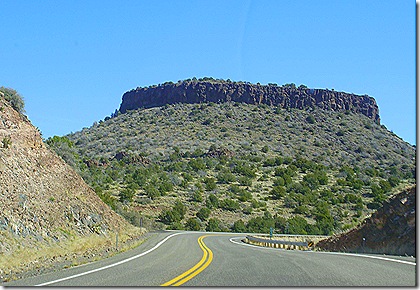 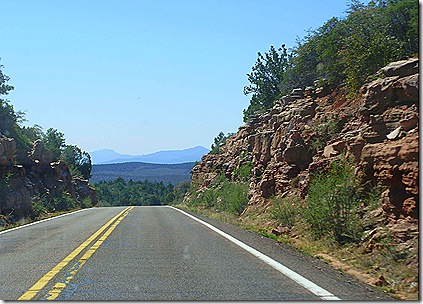 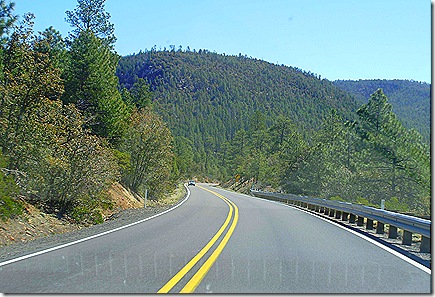 Then we saw this! I’d rather see one of my ex-wives at my door, with a suitcase in one hand and a toothbrush in the other, than snow! This kid shoveled his last foot of snow many, many years ago, and I never want to have to repeat the experience. 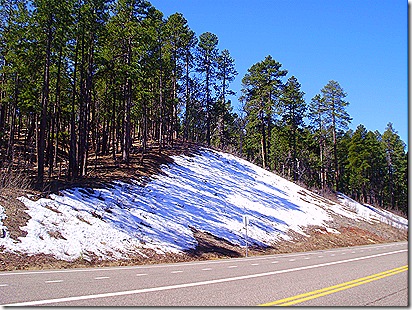 Highway 260 is two lane all the way to Payson, with more twists and turns than a good mystery novel, and occasional passing zones and pullouts to allow faster traffic to get past slower moving vehicles. 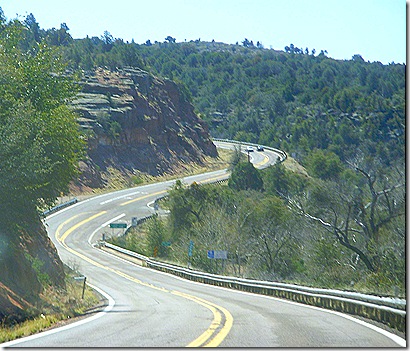 There are a lot of hairpin turns, and we were amazed how many semi-truck drivers went flying around those curves much faster. 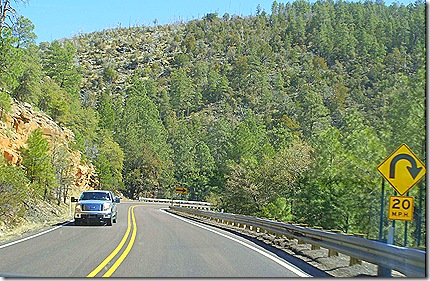 And, of course, there was plenty of road construction between Payson and Show Low. They have been widening this stretch of road to four lane highway for years now, and I don’t know if it will ever be finished. 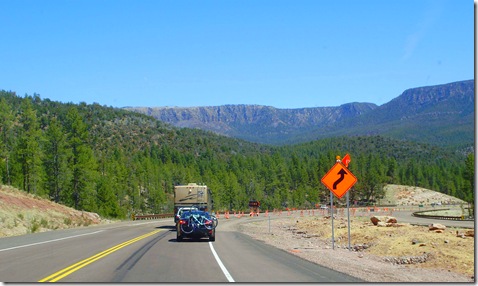 As we passed through the twin communities of Heber-Overgaard, we started seeing the blackened hillsides and charred skeletons of trees that are all that remain of miles of beautiful forest that were destroyed in the Rodeo–Chediski Fire, which burned for almost three weeks in 2002, wiping out over 468,000 acres. The conflagration actually started out as two separate fires that merged into one inferno. Both deliberately set by people, one of whom was a seasonal firefighter looking for extra work. I hope there is a special place in Hell for idiots like that. 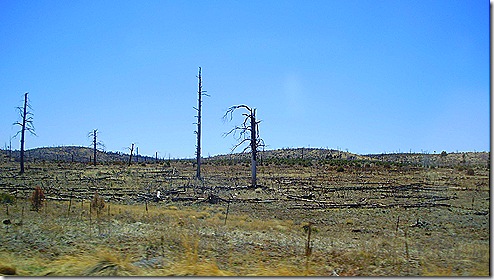 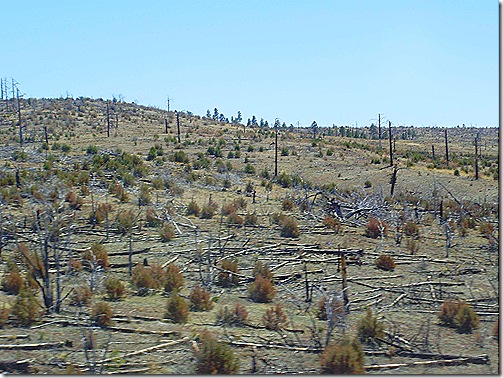 After 155 miles of mountain roads, we arrived in Show Low, and it was worth every inch of the trip when we were swarmed with hugs and kisses from Tiffany and her daughters Hailey and Destiny. Lord, how those girls have grown in a year!

Tiffany and her husband, Jim, have recently purchased their first home, a neat little starter home that they are very proud of, and for good reason. After eight years of apartment living, the girls now have a yard to play in, and even a dog! Guess who got a puppy fix? 🙂

We had a nice, though short, visit and left with promises that we’ll be heading over that way in our motorhome in the next two or three weeks, whenever the campground at the Elks lodge in Show Low opens for the season.

Driving home, we stopped in Payson for dinner, and then Miss Terry took the wheel, because it was getting dark and my night vision is not very good. By the time we got home, we were worn out from our day trip, but both agreed it was worth it for a chance to see Tiffany and her family.

We are undecided if we will take the same route when we go to Show Low in the motorhome. Our Winnebago can handle the climb with no problem, but with all of the sharp curves and steep grades, it won’t be the most enjoyable trip we’ve ever made.

Or, we could take Interstate 17 north to Flagstaff, I-40 east to Holbrook, and State Route 77 south to Show Low. That adds about 50 miles to the trip, but is a much easier drive, unless we get caught in the high winds that are common along that stretch of highway this time of year. The driving time is actually a little less taking the longer route.

I guess we’ll decide which way to go about the time we pull up our jacks and start the Cummins diesel engine!

Thought For The Day – If only closed minds came with closed mouths.