I had a restless night, and then my phone rang at 7 a.m. yesterday morning. That call took almost half an hour, and by then I was awake, so I got dressed and opened the window blinds to greet the morning. I know a lot of otherwise intelligent people who just love getting up early in the mornings, but I’ll never understand why. Mornings are way overrated!

What can you do that early in the morning, besides wrestle an early bird out of its worm? I’ll pass, if you don’t mind. I very much prefer Frosted Flakes, sometime after 10 a.m.

But since I was up, I answered a few e-mails, then checked the news to see who we’re at war with today, what new disease or natural disaster is going to end life as we know it, and what the conspiracy theory of the day was. There’s nothing like a little gloom and doom to set the mood for the day, right? 🙂

Eventually I had my bowl of Frosted Flakes, and Tony Tiger growled at me for shaking his box that early in the morning. Then I started getting things ready to hit the road. It was a very chilly morning, so I hustled and had us unhooked from utilities, our HWH leveling jacks pulled up, and our slide rooms retracted, in record time.

We pulled out of the Show Low Elks lodge campground and took State Route 77 north about 50 miles to Holbrook, with a long stop for road construction somewhere north of Snowflake. In Holbrook, we got onto Interstate 40 and drove east about 30 miles to Winslow, where we stopped at the Flying J for fuel and a little frustration.

Okay, a lot of frustration! The penny or two a gallon I save  on diesel really isn’t worth the hassle, but I needed propane too. But, of course, first I had to wait behind as guy in a motorhome who had to take his very slow time getting out, trying to figure out how to activate the pump, then wait until he was finished pumping his fuel and putting the hose away before he decided to start washing his windshield. That chore done (slowly), then he had to walk back and inspect his toad, scratch whatever itched, and then he finally got in his rig, sat there for a while, and eventually pulled away, so I could get up to the pumps. Oh well, life on the road.

While I was filling our tank, Miss Terry was washing the windshield. (Note this ladies, you really can get out and help. A lot of women RVers we see don’t seem to be aware of that, for some reason.)  The fellow beside us asked me how I trained Terry to do that (as his wife sat inside their pickup). I told him that it was really simple, all you have to do is break two or three expensive things early in your relationship, and wives start doing a lot of things to keep you out of trouble. He chuckled at that, and I told him “Hey, acting dumb isn’t all that bad! It saves me from a heck of a lot of work. Give it a try sometime. You’ve got the look, you can pull it off!” He did a double take on that one, but then he got a laugh out of it, and so did his wife.

With our fuel and propane tanks full, we decided it was time to fill our tummies, too. So we had lunch at the Denny’s restaurant at the Flying J, and then got back on the highway, headed west. A huge smoke cloud rose in the air as we neared Flagstaff, and roadside signs said there was a controlled burn going on. When we reached Flagstaff, the visibility was noticeably reduced. This picture Miss Terry took of country singer Kenny Chesney’s tour bus as it passed us will give you an idea of what I mean. 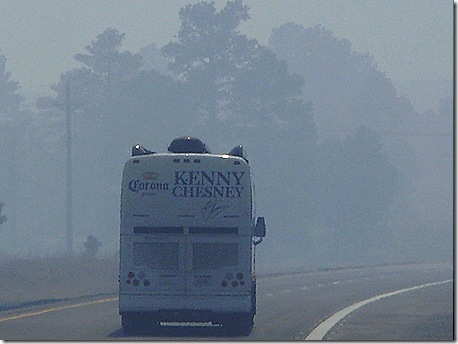 Fortunately, the smoke cleared just west of Flagstaff, and we had an easy run the rest of the way to Williams, where we stopped at Canyon Gateway RV Park, a Passport America affiliate where we stayed last year on a trip through the area. $19 a night got us a pull through full hookup RV site, with a great view.

Greg and Jan are right next to us, and on the other side of them, is a beautiful 2003 Winnebago Ultimate Advantage motorhome. The owner came out to say hello and ask us about our Ultimate Advantage, and Terry gave him a quick tour. Once I had our utilities hooked up, we went over to see their coach. Jerry and Glenda Shepherd (I hope I spelled their names right) are relatively new fulltimers and very nice folks, and it was fun to meet them.

A little after 5 p.m., we rode into town for dinner at the Pine Country Restaurant, and had huge slices of their delicious pies for dessert. I had the pecan, while Miss Terry opted for the double lemon pie. Wonderful! 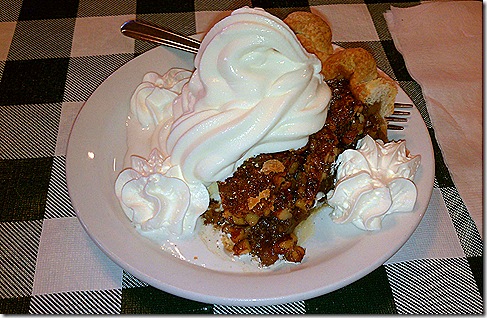 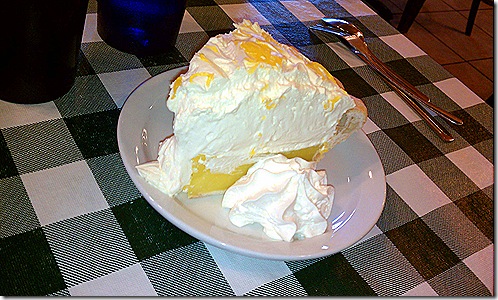 I’m not sure what kind of pie Jan ordered, but doesn’t she look like as excited as a kid on Christmas morning? 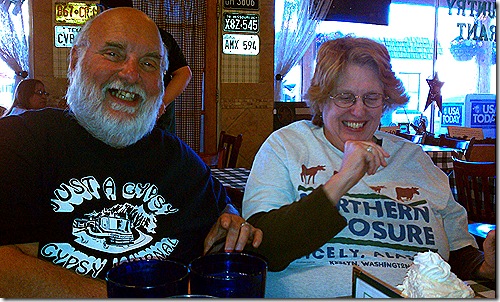 We’ll be here for three days before we move on to our next stop. Today Greg and Jan are going to ride the Grand Canyon Railway to the Canyon, and Terry and I will drop off bundles of sample copies of the Gypsy Journal at the local RV parks. Friday we’re going to tour Bearizona, a drive-through wildlife park, and Saturday we’re headed to the Las Vegas Thousand Trails. That wasn’t in our original travel plans, I just suggested the idea Tuesday night, and everybody was quick to agree. That’s the great thing about being a fulltimer. We can make a quick decision, stir the Jello, and away we go!

It feels good to be back on the road!

Thought For The Day – There comes a time in life, when you walk away from all the drama and the people who create it. You surround yourself with people who make you laugh, forget the bad, and focus on the good. So love the people who treat you right, and pray for the ones who don’t. Life is too short to be anything but happy.

12 Responses to “Mornings Are Overrated”