Nick's Blog » Faucets, And Burgers, And Bears, Oh My!

We were up and out the door early yesterday morning, headed for Home Depot for more parts for the bathroom faucet project. I’m not sure why I was up so early, since Miss Terry and Greg were the ones working on the faucet. Sometimes I think they drag me along just for ballast.

As I wrote in yesterday’s blog, they spent several hours Saturday trying to install a new faucet, and it just wasn’t happening. Apparently Winnebago installs the counters and sinks before they put the walls on their motorhomes, and they never expect anybody to have to repair or replace them, because there was no room to access it.

A good man knows his limitations, so I stayed in the front of the motorhome, out from underfoot and harm’s way. I knew they were having difficulties on what should have been a simple installation, but when I heard them say “Oh crap!” in unison, I realized that things were even worse than I expected. Don’t ask me how it ended up this way, but here is the new faucet. As I understand it from Greg and Terry, that copper tubing on the right side shouldn’t be twisted up like that. 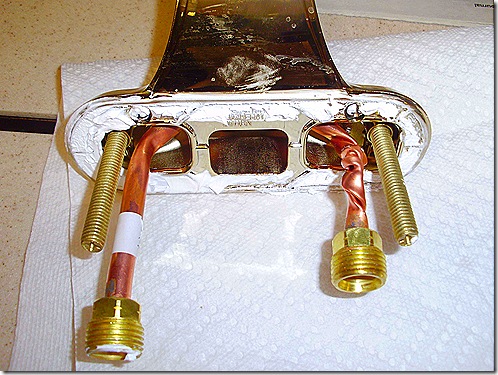 So yesterday morning at Home Depot, we got a new faucet and some other parts, returned to the campground, and they went back at it. Somewhere along the line, Ed and Judy Thompson stopped by to say hello. Ed and Judy grew up in Toledo, Ohio, where I went to high school, and we had exchanged e-mails a couple of years back. It was nice to get to know them, and to put faces with the names.

Terry and Greg played plumber a while longer, and then announced that we needed to go back to Home Depot one more time, for even more parts. Apparently the fittings we had purchased before were the wrong thread or something.

This time around, Jan went with us and we stopped for lunch at a neat 1950s themed restaurant called Bing’s Burger Station, which is located in an old gas station in Old Town Cottonwood. Oldies music was playing, and we admired the decor while waiting for our food. Terry and Jan ordered burgers, and pronounced them delicious, while Greg and I had steak sandwiches. I’d say it was probably the best steak sandwich I’ve ever had. This is one place we’ll be returning to! 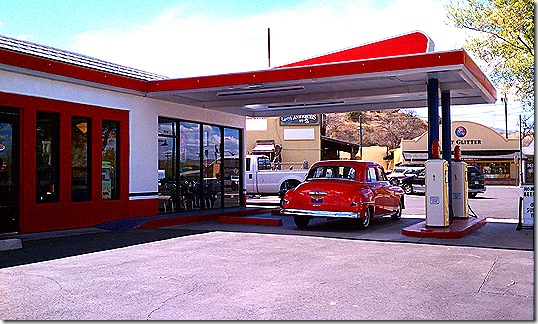 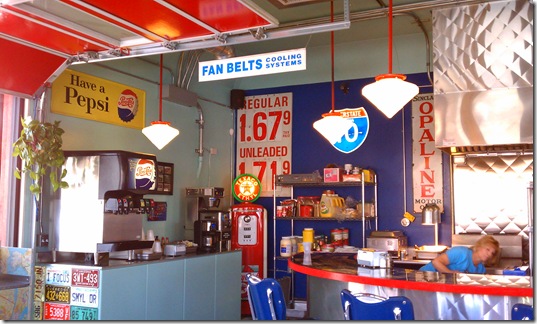 Along the way, we spotted this stuffed bear riding on the back of a motorcycle. I guess even bikers need something warm and fuzzy to cuddle up to once in a while! 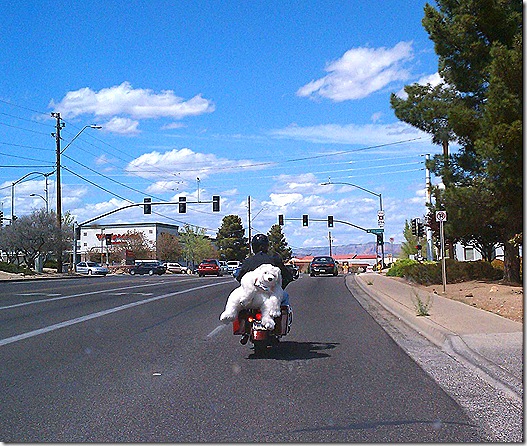 After returning the parts that didn’t fit and buying new ones, it was back to the Thousand Trails campground, where this time around it only took Greg and Terry a short time to install the second new faucet, and it worked! How cool is that? 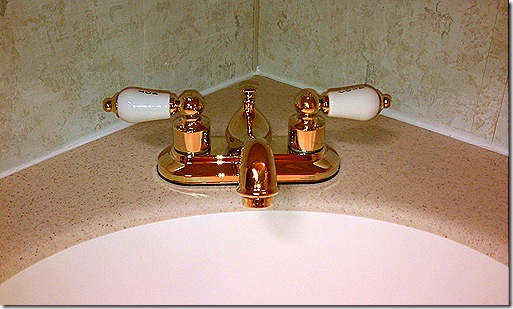 Just watching those two work wore me out, so I took a nap, and than about 6 p.m. we all piled back into Greg’s truck for a short drive to Camp Verde to, where else, Dairy Queen!

Thought For The Day – It’s not a "problem" if you can fix it with money.

7 Responses to “Faucets, And Burgers, And Bears, Oh My!”