We spent yesterday playing tourist with Greg and Jan in Prescott, affectionately known here in Arizona as Everybody’s Hometown, because if you came here from somewhere back east, the comfortable residential neighborhoods, with their wide grassy lawns and beautiful old Victorian houses, and charming courthouse square, will make you think you’re back in the East or Midwest. Prescott has always been my favorite place in Arizona, and I almost moved there a couple of times, but it never worked out, for a variety of reasons.

Driving into town from Prescott Valley, which is a miles long strip, busy with every kind of big box store and chain restaurant, we first turned north to explore the Granite Dells, a wonderland of beautiful rock formations. We saw some kayakers paddling away on the lake, but I missed getting a picture of them. Terry and I definitely have to come back here and get our kayaks wet! 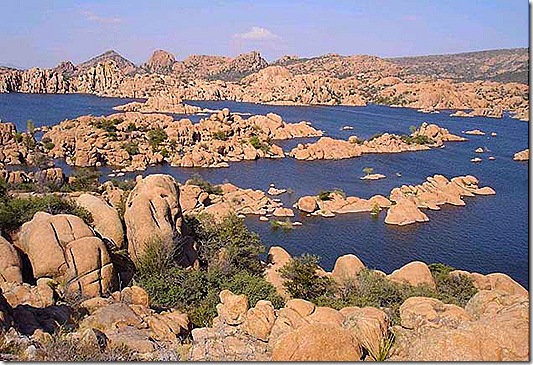 The Dells are awesome, and for my money, just as picturesque as the red rocks further north in Sedona. We drove down some dirt roads, stopping here and there to take pictures, or just to admire nature’s beauty. 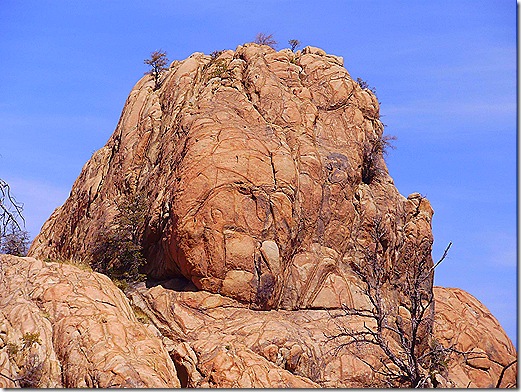 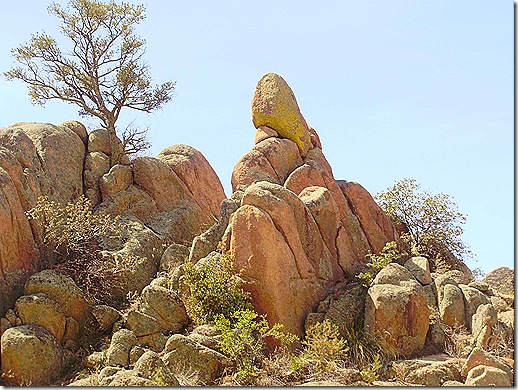 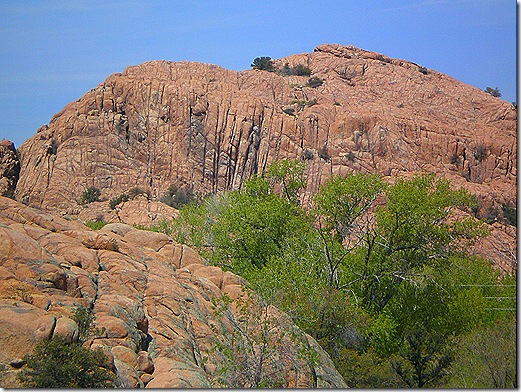 Besides being scenic, the Dells have a legend of Indian attacks and lost gold. As the story goes, in the 1800s, a group of  prospectors were attacked by Apaches here, and they buried several canvas bags of gold to keep it from the Indians. There was only one survivor of the attack, and legend says he returned several times with search parties, looking for the lost treasure, but never found it. Is it still there today, waiting for somebody to discover it?

When we left the Granite Dells, we stopped at the Bob Stump Department of Veterans Affairs Medical Center, which occupies old Fort Whipple, which was a cavalry fort during the Indian wars of 1864 to 1882, and later was headquarters of the Arizona contingent of the Rough Riders, of Spanish American War fame. 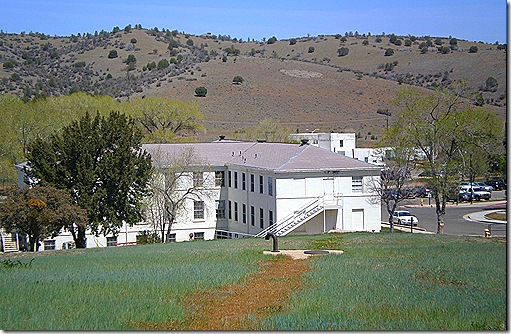 This is a really neat place, and you can just feel the history here. We drove up the hill, past the Fort Whipple Museum, which is housed in one of the early 1900s officers quarters, and then drove by the neat old houses the fort’s officers once called home. Today, hospital administrators and staff live in the historic houses. 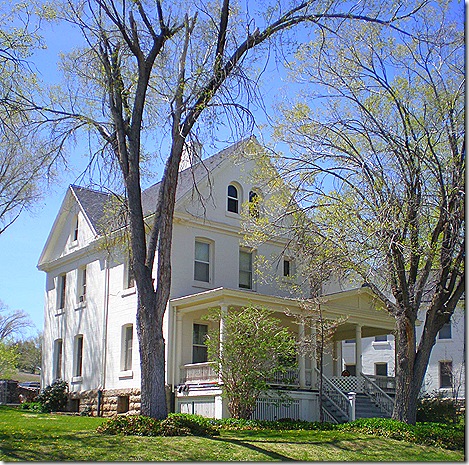 Prescott is famous for its beautiful Victorian homes, and we spent some time driving around admiring them. 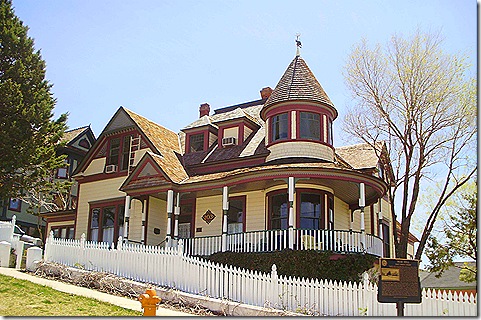 Back when I was thinking about moving to Prescott, 25 years or so ago, I almost bought this one. 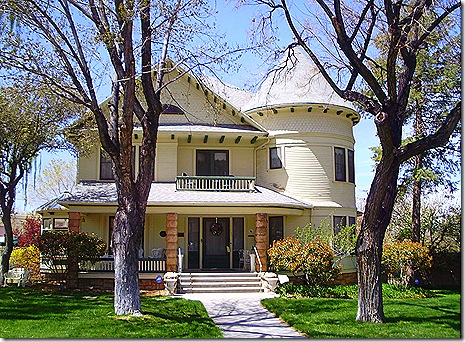 This is the 1894 Goldwater house, owned by the late Senator Barry Goldwater’s family. 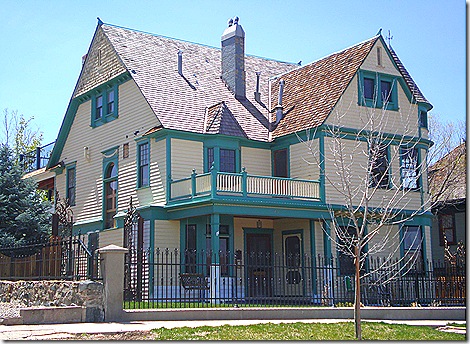 Our next stop was downtown Prescott, where we walked along Whiskey Row, once the wildest street in Arizona Territory. Many a thirsty, lonely cowboy and miner came here to quench his thirst in the saloons of Whiskey Row, and maybe to rent some companionship from the shady ladies who worked here. There are still several saloons, but things are a lot tamer these days, and most visitors to Whiskey Row come to browse the neat shops, which offer everything from clothing and Indian jewelry, to western hats, books, and artwork. 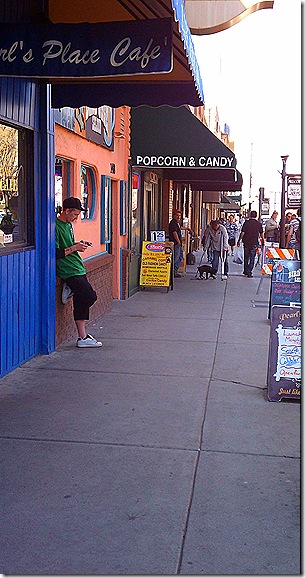 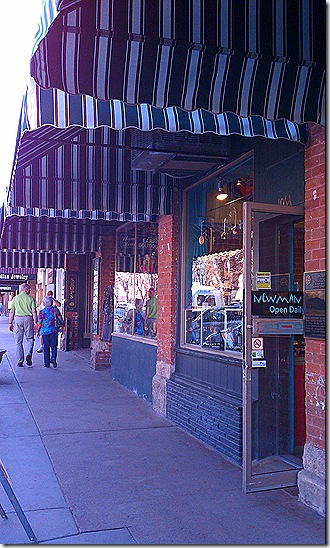 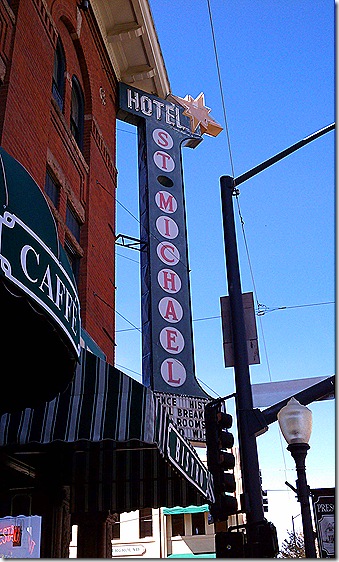 When we were finished exploring Prescott, we stopped at the Elks Lodge in Prescott Valley to check out the campground. Both Terry and I, and Greg and Jan, agreed that it would be a good place to stay when we come back to spend some time in Everybody’s Hometown. And that’s definitely on our list of things to do!

Thought For The Day – We must be willing to get rid of the life we’ve planned, so as to have the life that is waiting for us! – Joseph Campbell