Yesterday was a plumbing day here at the RV park. I once had a friend who owned a plumbing company, and he taught me everything I needed to know about the trade – Crap and water flow downhill; payday is on Friday; and keep your fingers out of your mouth! 🙂 I mean, if you don’t know much about plumbing, there is nothing to worry about. This is why there are professional plumbers out there that can sort out any issues you are having around the home. Just by simply looking into something like plumber vancouver (if you live around this area), you’ll be able to get the right person out for the job. There’s always someone out there willing to help you out.

Terry decided that yesterday would be a good day to replace our old bathroom sink faucet with the new one we bought while we were in Tucson. The old faucet was leaking, and we tried all of the simple ways to solve that problem, with no success.  So off with the old and on with the new. Well, sort off.

Taking the old faucet off wasn’t much of a task, and Terry removed it quickly, even though access under our sink was pretty tight. 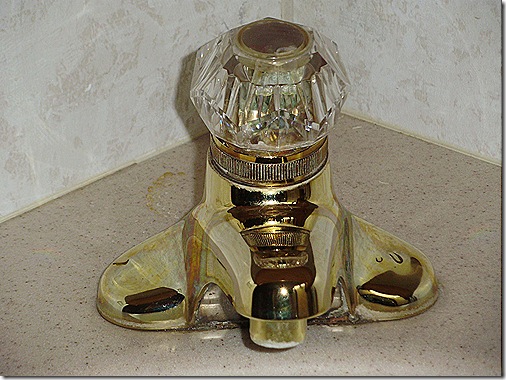 I watched her for a while, and offered to help once or twice. Fortunately, she said the best way for me to help her was for me not to help her! 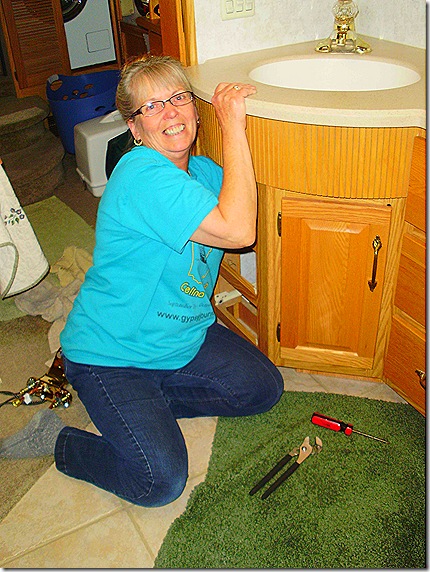 So I wandered outside, where my pal Greg White was replacing the grey water valve on his American Eagle motorhome. I was going to offer to help Greg, but let’s be honest, we’re talking about me and a project that involves tools. I went back inside and played Scrabble on my iPad. 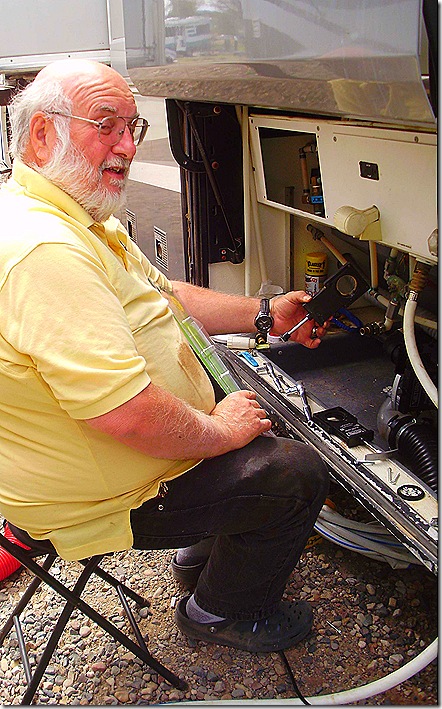 A little later on, John and Addie Strodel came by for a quick visit, and Terry took a break to chat with them for a bit. John and Addie spent the winter in Yuma, and came to our rally on a day pass. It was good to have a chance to visit, away from all of the activity of the rally.

By about 3:30 p.m., Terry was getting frustrated because, while she had the new faucet in place, she couldn’t get one of the water connections to hook up without leaking. And, of course, it was the one at the furthest back and hardest to access location. So she broke down and asked me to help. Not because of my abovementioned knowledge of the plumbing business, but because I have Greg’s number on speed dial on my telephone.

Greg came over and fought with the connection for quite a while, and then decided we needed a different doodad, to replace the current gizmo that wasn’t lining up properly with the thingamajig, and we could find it at Home Depot. We were supposed to meet Bob Parker and Donna Huffer for dinner in Cottonwood, so we decided to make a stop at the home improvement store on the way to the restaurant.

We found the doodad with no problem, but then ran into a challenge getting to the restaurant. Cottonwood has a very low crime rate, but we happened to pick the afternoon when, according to the folks at the restaurant,  a woman got into an altercation with the police and was shot, just a couple of doors down from the restaurant. Bob and Donna were already there, but when we arrived, the street in both directions was closed. The police were not allowing anybody in, but they did let Bob and Donna leave, so we called them and agreed to meet at a nearby Sizzler restaurant.

We had a nice time visiting as we ate, talking about our RV adventures, and sharing a laugh or two. Of course, we all know that Nick happens, and he happened at dinner. The waitress came around offering to refill everybody’s drinks, and I was trying to hand her Terry’s glass when I knocked over the bottle of steak sauce, which, fortunately, was capped and did not spill. But while trying to set it back upright, I knocked my newly filled glass over. Unfortunately, it wasn’t capped, and did spill. All over the table, all over my leg, and down onto the floor! The waitress was very nice about it, and as she went to get something to clean up the mess, she told me not to worry, it happens all the time. How could that be, I don’t eat there all the time???

Since I was sitting next to Greg, and I didn’t want anybody to slip and fall, whenever anybody started to walk past the spilled soda and ice cubes, I made it a point to warn them to be careful, because “My friend spilled his drink.” Sometimes I think Greg is tempted to shoot me, and the only reason he doesn’t do it is because he has a bad back, and isn’t up to being a pallbearer.

Back at the campground, Greg and Terry went back to work on the sink, and I didn’t even try to offer to help them. By then I needed to go to the bathroom, and I didn’t want to slow them down. I call this picture “Saturday Night At The RV Park.” Greg forbade me to use it in the blog. How’s that working out for you, Greg? 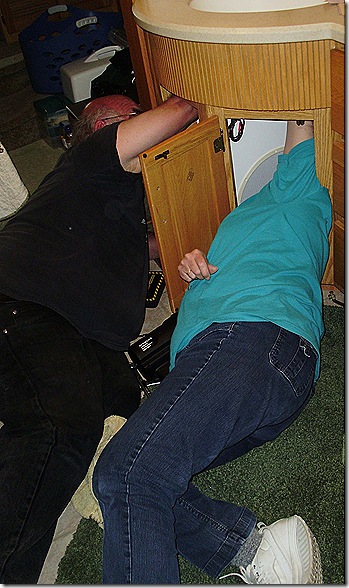 But alas, despite all of their efforts, Greg and Miss Terry finally had to call it a night about 9:30 p.m., and this morning we have to go back to Home Depot for a watchamacallit and three doohickeys. I’ll let you know tomorrow how that all works out.

Bad Nick has made avoiding manual labor his life’s work, so while all of this was going on, he stayed close to the desk, posting a new Bad Nick Blog titled A Means To An End. Check it out and leave a comment.

Thought For The Day – Dear Lord, please give me the strength to not slap an idiot today……Amen

3 Responses to “A Plumbing Day”