Nick's Blog » The Case Of The Disappearing Golf Carts

Sometimes it can be very frustrating trying to plan an RV rally. There are a thousand details that have to be handled behind the scenes, like pre-ordering enough donuts for everybody every morning, but not ordering too many and having them go to waste. Or making sure we have enough two-way radios for the parking crew, and that they they are all on the same channel. Or reserving golf carts ahead of time so we’ll have them to use when we are parking the rally attendees. Then, we have to hope that the folks at the pizza place, or the golf cart rental company, or whatever, don’t drop the ball and leave us hanging.

And that’s exactly what happened yesterday. Last year we rented two golf carts from the only company here in Yuma that rents them, and they brought us electric carts. After a couple of hours of parking folks, their batteries went down and those carts were useless to us. Greg White and I ended up using his truck and my van for a lot of the parking duties. When I called to complain, they brought us two gas powered golf carts, and the lady from the rental company told us that electric carts were not up to the job for our needs.

Before we ever left Yuma last year, after the rally ended, I called and reserved two gas powered carts for this year’s rally. I asked if she needed a deposit, and she assured me that no deposit was needed, because we were existing customers. She also said to touch base with her a month or two before the rally, to remind her of our needs. I called in late December, and was assured that the carts would be ready for us. I called again, two weeks ago, and again the lady said that she had us on the schedule for two gas carts, and to call her when we got to Yuma.

Well, you can probably see this coming. I called yesterday, only to be told that they have a lot going on, and that there are no gas powered golf carts available. But she had battery powered carts. I told her that the battery powered carts would not do the job, as we learned last year, and she assured me the they are good for at least two hours of steady use. Uh huh, and we’ll be parking people for eight hours. What do I do for the other six?

I reminded her that I had reserved the carts a year ahead of time, that I had called twice to remind her, and that she kept assuring me that she would have them ready for me. She replied that they were really busy, and then passed the buck by blaming her boss for letting us down. Can you say frustrating? Oh well, we’ll figure out something. We always do.

Yesterday, while I was out running errands, Terry and Barbara Westfield were in our rig working when they heard a loud thump on the side of the motorhome that scared them both. Investigation showed that for some reason, a dove had flown right into the side of our Winnebago and literally exploded. By the time I got back, Tom, Barbara and Terry had most of the mess cleaned up, and they said it wasn’t a pretty sight. I have no idea what would make a bird fly into a parked RV like that, at such high speed. Greg thinks maybe a hawk or something was chasing it, and I guess that makes as much sense as anything.

After a hard day of rally planning, we still weren’t done with our duties. We still needed to have dinner at yet another restaurant, so we could give it a thumbs up or thumbs down for our rally attendees. Da Boyz Italian Restaurant, in the historic Kress building in the old downtown section of Yuma, was an excellent choice. We were seated in a dining room that was decorated with pictures of Marilyn Monroe and a mounted deer head on one wall, and the food was wonderful. 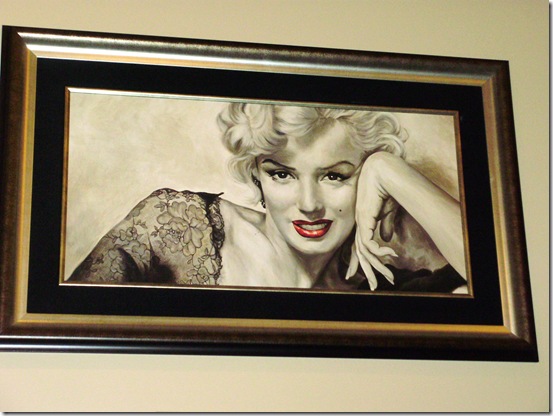 Definitely a thumbs up with this place. Our selections ranged from pizza to ravioli, to spaghetti and lasagna, and everybody was well pleased with their choices. I’m not sure what this deer thought as it watched us eat, but I had never seen a deer wearing beads and lipstick before. Have you? 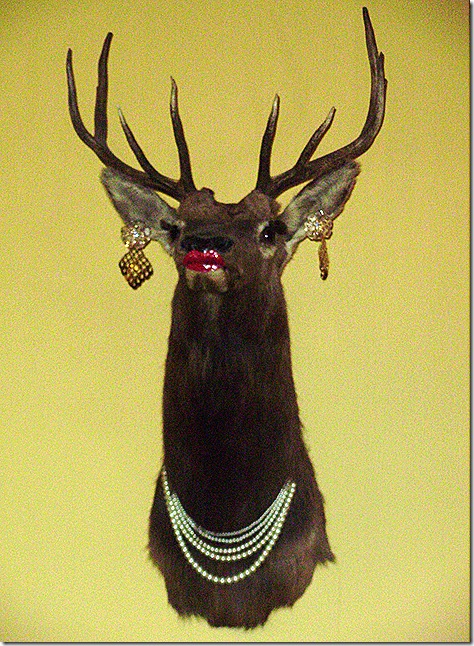 I’m not sure what Jan is looking at in this picture, but I think Greg was calling his psychologist to tell him that he is stressed out and needs a vacation from his retirement! I’ve been working him too hard. 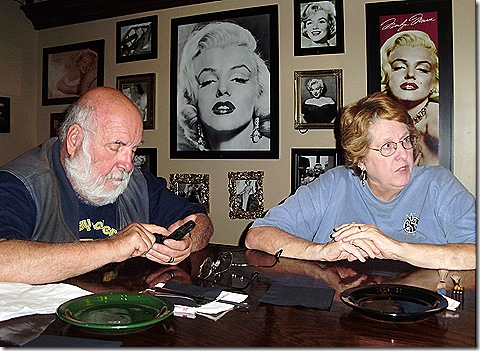 As I said in yesterday’s blog, I am still adding seminars and tweaking the schedule. Yesterday I locked in seminars on RV batteries, solar power, and 10 Things To Never Do With Your Computer. We also signed up some new vendors, including Satellite Electronics, U.S. National Solar, and Digi ThreadArt. And we still have more vendors signing up, and more rally registrations coming in!

8 Responses to “The Case Of The Disappearing Golf Carts”