Like a lot of RVers, we enjoy wandering around swap meets and flea markets, and one of the best ones we have ever found is the Arizona Market Place, here in Yuma. No matter what you are looking for, from tools to produce, clothing, or used books, you’ll find it among the vendors at this huge venue. There are also a lot of vendors selling RV parts and accessories.

Yesterday morning, we spent some time exploring the flea market. We weren’t looking for anything in particular, but just enjoyed browsing the various offerings. The place wasn’t too crowded, but we managed to run into several people we knew, including Luke and Judy Rinehimer, who were at our rally last week, and Nancy Lesser-Adamo, who was manning a booth selling LED lights for The Prudent RVer. This company also had a booth at our rally. 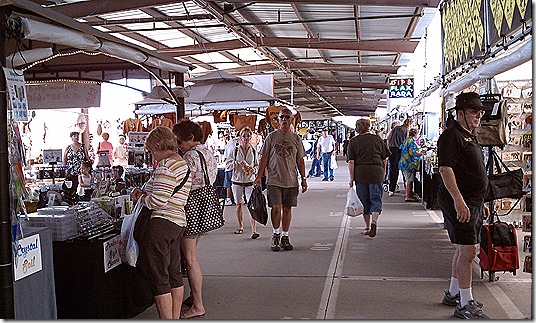 Here’s Jan White, looking around to see where Greg has wandered off to. Maybe she should buy him one of those Pet ID tags advertised on the sign, so if anybody finds him, they can return him to her. And trust me, it won’t be very long before they will return him! 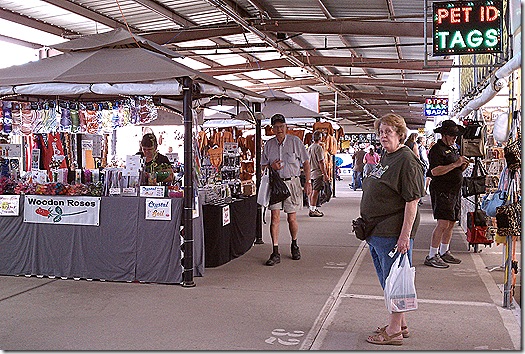 When we left the flea market, we drove out to the Foothills for lunch at Mi Fajita, which Miss Terry said was one of the better Mexican restaurants we have been to in a long time. The service was fast, the food was very good, and the servings were huge. I don’t think any of us were able to clean our plates.

Back at the fairgrounds, we were all tired, and while I don’t know what everybody else did, I took a nap. My back has been hurting for several days now, and when I woke up, I was feeling a lot better, and more refreshed. I helped Miss Terry pack the storage bay where we keep our rally supplies, then we ran to Sam’s Club to return some extra cans of coffee we had left over from the rally, and to pick up a few things Terry needed.

Since we planned to leave Yuma this morning, when we got back from Sam’s Club, Greg White and I started checking tire pressures on our motorhomes. A while back Greg bought a neat air compressor from Sears, and I was so impressed after seeing it that I bought one too. Not because I’ll ever use it, but someday I may need Greg to fix something for me when his is not available. I’m always thinking ahead that way. 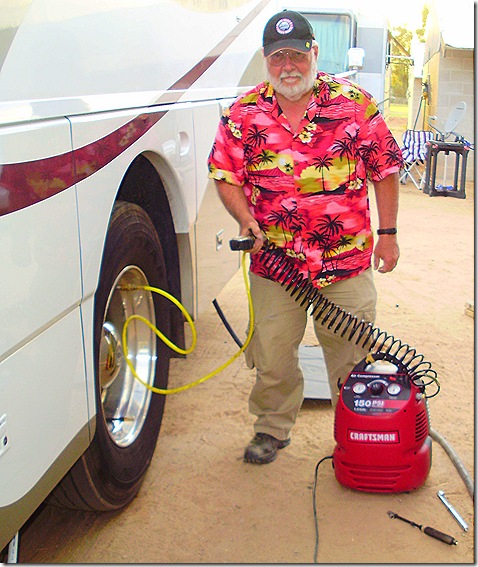 A year ago, we had new Goodyear tires installed on our Winnebago, at the Camping World in Mesa, Arizona. From the very first day, I had problems with the valve extenders they put on the tires. We left Camping World, drove to Gila Bend for the night, and the next morning one of the inside duals was low on air. I topped it off, and we drove on to Yuma for our rally. By the time the rally was over, the inside dual on the other side was low. I fought this nonsense for several weeks, before Camping World admitted that the valve extensions they had installed were bad. They replaced the valve stems and extensions, but we have continued to have problems, either with the tires losing pressure, or our PressurePro tire monitoring system not being able to read the tires.

Before we left Apache Junction to come to Yuma, both inside duals were not reading on the PressurePro. I checked them with a tire gauge, and both were okay. But apparently, somewhere between then and yesterday, the left inside dual went low and the PressurePro could not read it. When we checked the tire last night, it was completely flat. Not only that, but we could not get it to air up.

I called Coach-Net, our emergency roadside service company, at 6 p.m., explained my problem, and the lady I spoke to was very polite, and obviously knew her way around RVs. She said she would find a mobile tire repair guy and call me back. My call with her ended at 6:07. At 6:17 she called back and told me that the tire man would be calling me directly. He called at 6:27, and was here at 7:05. Fast, professional service in my opinion.

This is what he found when he jacked the motorhome up and took off the tire. I don’t know how far we ran on it before this damage was done, but I’m sure glad we checked our tires before we pulled out today. 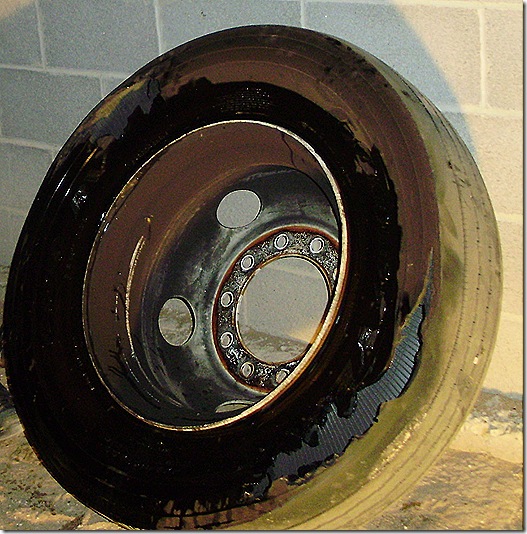 We didn’t see any evidence of a nail or road hazard, and given the problems I’ve had with the original tire installation, I’m sure it was caused by the valve stem or valve extension failing. I will never allow Camping World to touch my coach again! A monkey with a crowbar and a roll of duct tape could probably do a better job than the idiots they have working at the Mesa store!

So this morning the road service guy is supposed to return with a new tire, assuming he can find one in stock, and we’ll hopefully get on the road within a reasonable time. At least we’re plugged in right where we’ve been all along, and if we have to stay put until a tire can be located, we’re safe and off the road.

Thought For The Day – Eat a live toad first thing in the morning, and nothing worse will happen to you for the rest of the day.