As promised, the road service fellow that Coach-Net sent out Sunday night called at 7:30 yesterday morning to tell me that he had located a replacement tire for our motorhome, and that he would be there within a half hour.

He arrived promptly at 8, and mounted the new tire and the outside dual on our Winnebago. He, I, and Greg all checked the outside tire, to see if it had suffered any stress or damage from carrying all of the the weight when the inside tire failed. It looks fine, so hopefully it will be okay. The bill was $736 for the mounted and balanced tire, with sales tax and old tire disposal fee, and Coach-Net picked up the tab for both $80 service calls.

With the tires mounted, we unhooked our water and electric connections, pulled in our slide rooms, and made ready to travel. We said our goodbyes to Tom and Barb Westerfield, and thanked them again for all of the help they gave us before, during, and after the rally. We couldn’t do it without them. Barb told me that her mother reads this blog every morning – Hi Mom! Thanks for raising such a great kid!

A little after 10 a.m. we pulled out of the Yuma Fairgrounds and got on Interstate 8, with Greg and Jan White following us in their American Eagle motorhome. We enjoyed our time in Yuma, but were happy to be heading someplace new.

We were glad we were headed east, because the westbound lanes were shut down for some major accident. We stopped at the Border Patrol inspection station on the east side of the valley just long enough for an agent to wave us through, and then began the climb over the mountains. Both diesel pushers handled the grade well, and after topping out, we rolled back downhill on the other side, and made good time on the 115 miles to Gila Bend.

I wanted to get our motorhome weighed, since it has been over a year since I have done so, and Holt’s Shell in Gila Bend has a truck scale that has a low enough shoulder than an RV can weigh both sides. I had never done this before, but Greg has it down to a science, and walked me through the process. Rather than trying to explain it myself, check Greg’s February 28 blog post about how he weighed his coach.

Our rear axle weight was 21,240 pounds, so we are are about 1,240 pounds overweight. We really, really need to offload some stuff from our bays. Side to side on the rear axle, we were heavier by 280 pounds on the right. The folks from RVSEF, who weigh RVs at rallies, told me when I bought this coach that this is common with Winnebago diesel pushers that have the basement air conditioner and batteries in bays on the right rear of the coaches.

For as long as I can remember, Greg and Jan have been telling us about a great little Mexican restaurant in Gila Bend called Sofia’s. We went there for lunch, which was outstanding. I had two shrimp burritos, and they were beyond delicious. Terry had a combination platter with a chili relleno, a tamale, and a cheese enchilada.Terry is a bit of a snob about Mexican food, and it takes a lot to impress her. This place really did. It’s nothing fancy, but I have been told by my darling that we will never drive past Gila Bend again without stopping for lunch or dinner at Sofia’s. She won’t get any arguments out of me about it. And the good news for RVers is that there is a large empty gravel lot across the street, where you can park!

Back on the highway, we passed mile after mile of desert scenery as we made our way to Interstate 10, where we turned south for the run to Tucson. 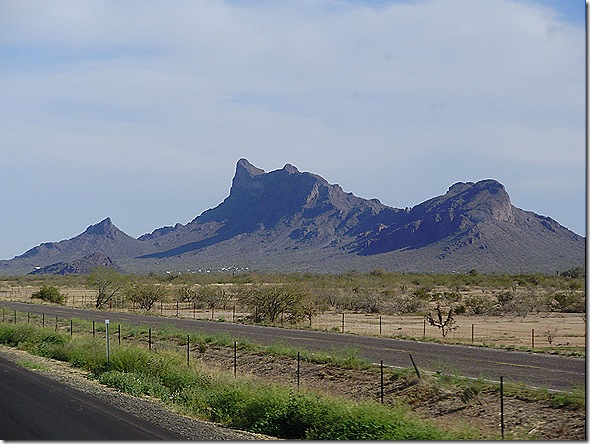 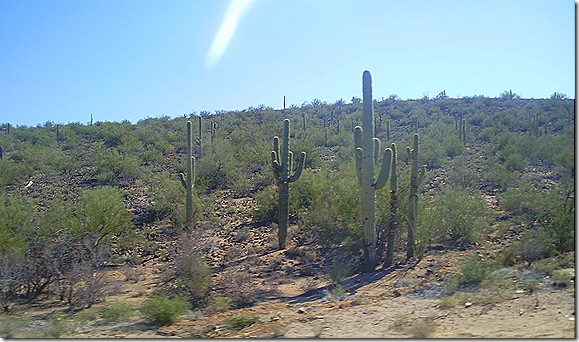 Traffic was much heavier on I-10, but we scooted right along and arrived at the Pima County Fairgrounds just past 5 p.m. I got lucky and got the last 50 amp full hookup RV site, and poor Greg had to settle for a 30 amp site. I offered to let him have the 50 amp site, but Greg is just so darned noble that he insisted I take it, and I’m so shallow that I agreed. 🙂 The lady in the office said they will have a 50 amp site opening up in a day or two, if Greg wants to move. 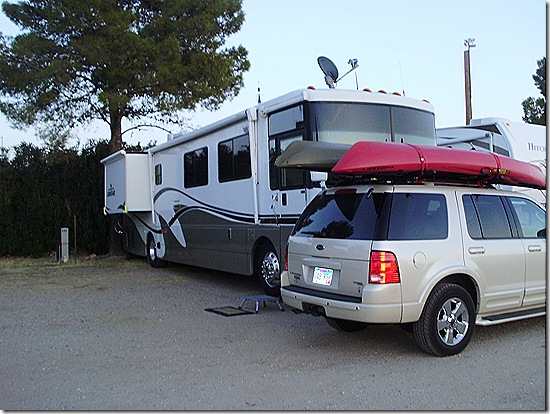 There are only a few RVs here, though we passed several motorhomes on display for an RV show that will be held here in the next few days. 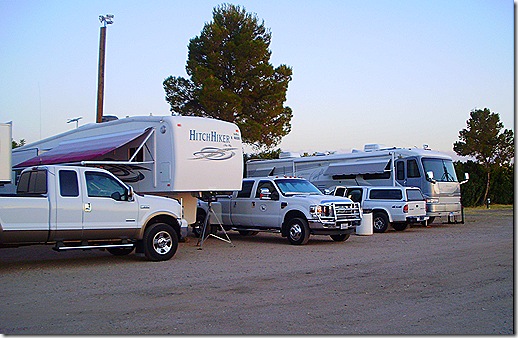 I got the motorhome parked, leveled out, and hooked up just in time to get this photo of the sunset. 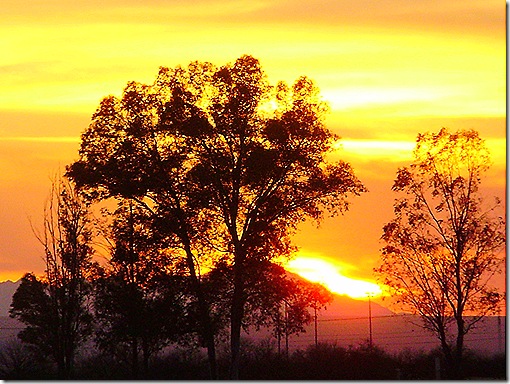 We’ll be here a week or maybe two, visiting my cousin Beverly, playing tourist, and just being lazy. Basically, we’re killing time until it warms up enough to go up to the mountains to our old hometown of Show Low, to visit my daughter and her family.

Thought For The Day – You’re schizophrenic? Gee, that makes four of us!

5 Responses to “Saying Goodbye To Yuma”