The fun at the Gypsy Journal rally never stops, from sunup to long past sundown. If you come to one of these events and are bored, it’s your own fault. You must be hiding in your RV, or something!

The first seminar I gave yesterday was called Laugh Your Way Across The USA, which is a lighthearted look at the misadventures and nonsense we have gotten ourselves into over the years. It was standing room only, and I think I had about 55 people in the room. But I learned a valuable lesson with the second seminar – never schedule myself against one of Greg White’s computer seminars. He had over 70 people in his Computer Do’s and Don’ts seminar, while I had just eight in my Starting A Business On The Road seminar, in the same time slot. I’m not surprised On Tuesday, Greg had 117 people in his 10 Things To Never Do With Your Computer seminar. What can I say, the man is good!

In the afternoon, I led a two part panel discussion called Staying Married and Happy In An RV. This was an experiment, and I’m not sure yet if it is one that we will repeat. The panel consisted of Don and Sharon DelRosario, who were solo fulltmers who met on the road, fell in love and got married, and now travel together fulltime; Terry and myself, who have been fulltiming almost 13 years; and Barb and Tom Westerfield, who have been married over 40 years, been RVers for about 7 years, and have been fulltiming since January. 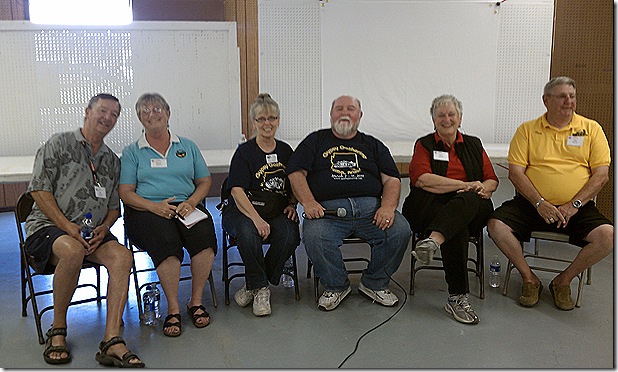 We discussed some of the common challenges that couples face living in an RV together, our solutions to those problems, and our ideas on what makes it work for us. In the second session, we took questions from the floor, and tried to address them. We found that it was hard to get folks to open up and ask questions, which I expected; but the ones we did get were very good. After the seminar was over, I asked people how they felt about it, and most said it was interesting and worth their time. The most common comment I got was that, if nothing else, it was comforting to learn that the things they have to deal with as a couple are not unique, and that we all have many of the same issues.

I have said before that one thing I learned in the Army was that you can plan and strategize all you want to, and you may know exactly how an operation is supposed to go. But once you put boots on the ground, everything can go to hell real quick, and then it’s time to improvise. That lesson paid off once again yesterday, when the folks from Dominos Pizza showed up 1/2 hour early with 130 piping hot pizzas for our pizza party. Almost nobody was in the building yet, only a handful of Terry’s servers had arrived, and the tables weren’t set up yet. But we darned sure didn’t want to serve cold pizzas, and we had no way to keep them hot!

Terry instantly went into action, rounding up a bunch of volunteers to get the tables arranged, while Greg and I found the building where the fairgrounds public address system is located, used  our master key to get in, and I started broadcasting the news that the pizzas had arrived early, and to get them while they were hot. People came pouring out of their RVs, and within 12 minutes Terry’s crew had set up all of the tables, and within another 10 minutes the entire crowd of over 310 people was sitting down to eat! Nobody was served a cold pizza. Now that’s adapting to the situation and improvising!

After the pizza party, it was time for the highlight of our week, the Cactus Queen beauty contest. We had eight of the most deplorable looking ladies(?) this side of Timbuktu on display, and I think everybody had a great time, roaring with laughter as our contestants pranced and flounced their way onstage, and vied for the coveted title of Cactus Queen. It was a hoot! 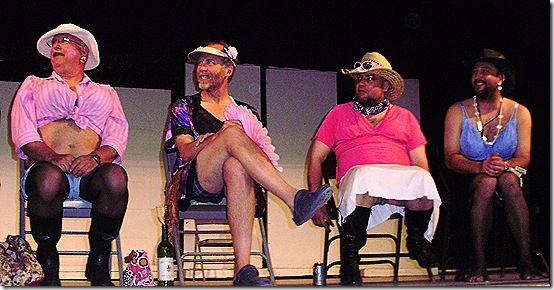 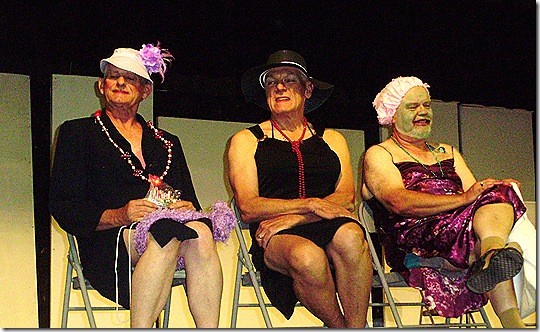 The audience voted by applause, and our newly crowned queen was Lotti Hotti, a wild woman with more tattoos than a Hell’s Angel, and absolutely no sense of social decorum. But it as all in good fun, and by the time it as over, we had raised $356 for the Escapees CARE program. 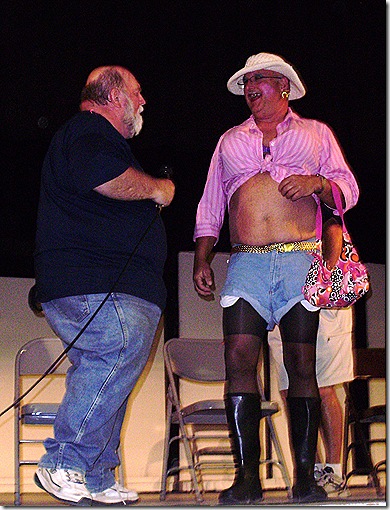 When the last person finally straggled out of the building and we locked the door, we all felt like we deserved a treat, so Terry and I rode with Greg and Jan to Dairy Queen, where we met up with Tom and Barb, and Leroy and Anne Willis, who have a beautiful Eagle bus conversion. We all sat outside enjoying our desserts, and had a good time just visiting, until the eyelids started getting droopy, and we decided it was time to head back to the fairgrounds.

I wrote my blog, printed out some camp guides that rally attendees had ordered, and then it was bedtime, because during rally week, morning comes way too early.

Thought For The Day – Help stamp out, eliminate, and abolish redundancy!