Yesterday was the last full day of the 2011 Western Gypsy Gathering rally, and it was another busy one, filled with fun, laughs, and some excitement we could have done without.

Miss Terry was up and out the door before me, to get the morning coffee and doughnuts ready. Just as I was getting out of bed, she jerked the motorhome door opened, yelled “There’s an RV on fire at the dump station!” gabbed our big P- can fire extinguisher, and was gone. I quickly threw on my clothes, grabbed more extinguishers, and made a beeline for the dump station, maybe 100 yards away, on the other side of a bunch of RVs and a building or two.

By the time I got there, the fire department had already arrived, and everything was under control. It was a smaller Class C motorhome, and the fire was under the hood. Fortunately, the owners had taken Mac McCoy’s fire safety class, and had two of his fire extinguishers on board, and they had the fire out when help arrived. The problem was later found to be an after-market battery isolator that had overheated and caught fire. The damage was minimal, and the guys from Redlands Truck and RV Performance Center were able to make the necessary repairs to get the RV back on the road easily. I shudder to think what could have happened if they had not had the training, the fire extinguishers, and the presence of mind to use them.

With that excitement over, I went back to our Winnebago, brushed my teeth and took care of the rest of my morning routine, then went into the Vendor Building for a couple of doughnuts to get my sugar fix while I mingled with the crowd. At 10:30, I presented a new seminar, Welcome to My Arizona, that I had created for this rally, and had a full house, with lots of good comments and questions from the audience.

In the afternoon, I gave two more seminars, How To Be A Smart RV Shopper, and Kayaks and RVs. There were not too many folks in the first seminar, mainly because everybody here already has an RV, but a few people wanted to be prepared to do battle with the salesmen the next time they went car or RV shopping.

Tim and Crystal Ryerson, from Inflatable Boats 4 Less, helped me with the kayak seminar. We had a sit in model, a sit on top, and two Sea Eagle inflatables, a 435 PaddleSki like mine, and a 385 FastTrack. The people at the seminar all seemed very impressed with the Sea Eagle boats, especially after feeling how heavy our sit on top boat is, and having the opportunity to sit in the different styles and models we had for them to look at. I suspect that Sea Eagle made some new fans from the seminar, and Tim and Crystal may have gotten a sale or two out of it, too. 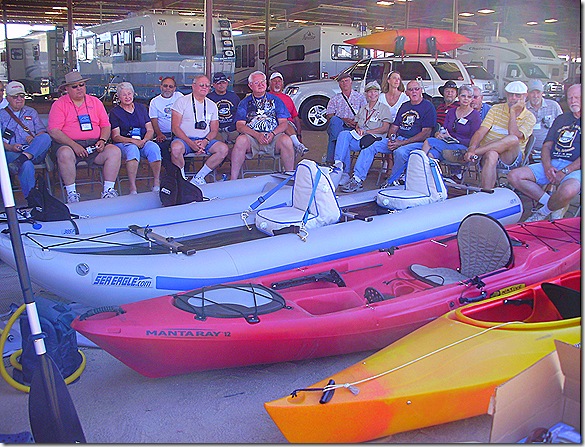 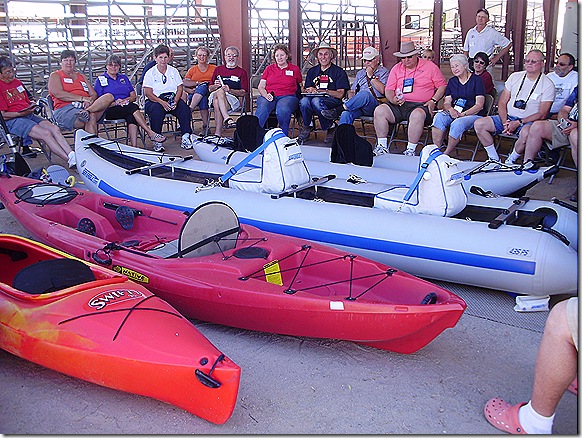 As soon as the kayak seminar ended, I had to run out to the front parking lot for our Golf Cart Rodeo. It was pretty hot, about 89 degrees, so we didn’t have a large crowd, but we sure had fun! The idea was that the driver was blindfolded, and the navigator had to guide them through a winding course of plastic cones. Talk about confusing! One couple had the wife driving, and her husband kept pointing and saying “Turn this way. No, this way!” And of course, her being blindfolded, she had no idea which “this way” he meant!

My pal Judy Bayless, who teaches genealogy seminars at our Arizona rallies, took the wheel while hubby Walt directed her. Then, not satisfied with her performance the first time around, Judy insisted on a “do over.” I’m not sure which time was worst, the first or the second, but both were fun. Dennis and Carol Hill, from the RV Driving School, both took a turn at the wheel. Carol tried to run me over, and I had to run for cover! Have you ever seen a fat, sweaty guy my age running in that kind of heat? it’s not a pretty sight! 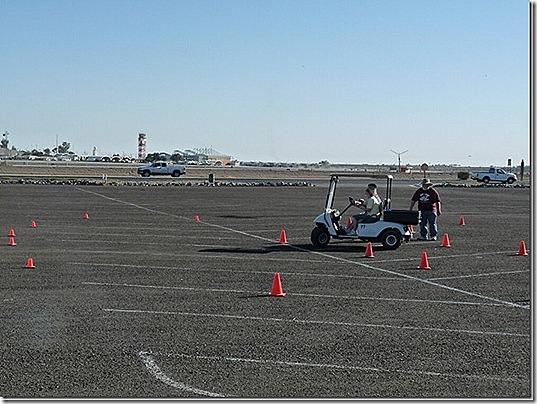 The best time of everybody who ran the course was myself at the wheel, with Greg White navigating. Somebody said it must have been because we were the ones who laid out the course, but that wasn’t why. It’s just that this wasn’t the first time Greg has blindfolded me and said “Let’s go for a ride!” 🙂

We ended the day with our closing ceremony, thanking all of our volunteers for their efforts to help make the rally a success, and then more door prizes. When we finished, we were mobbed with people coming up to thank us for a fun rally, and promising to be back next year. Seeing so many happy people, all telling us they had a good time, makes the long days and short nights, and all of the hard work worth it to us.

Today is the last day of the rally. We’ll have morning coffee and doughnuts, another round of goodbye hugs, and then everybody will take off in all directions, headed for their next adventure. It’s been a fun week!

Thought For The Day – An elephant is a mouse built to government specifications.

4 Responses to “Last Day Of The Yuma Rally”