Nick's Blog » I Miss The Rain

Longtime blog readers will recall that at last year’s Gypsy Gathering in Yuma, the city received its entire year’s worth of rain on the day we parked our Early Bird arrivals. Not to mention hail, sleet, and lighting! It was a miserable experience for our dedicated parking crew, but they stuck with it like the troopers they are.

This year, we had a nice warm (even hot) sun shiny day to park the Early Birds, and life was good. But then, late Sunday night, the wind began to blow, as the wind can only blow here in the desert southwest, and it continued all day Monday. Hard wind! Winds out of the west at 35 miles per hour, with gusts even higher. If the parking crew faced away from the wind, the backs of their necks got sandblasted, and if they faced into it, their eyes and teeth were immediately filled with grit. If they stood sideways I thought they had gone deaf, but it was only the quarter pound of sand in each ear that prevented them from hearing!

Driving the golf carts, with no windshields, to park the RVs seemed to be even worse, because we would find ourselves driving into the gale, eyes squinted to try to keep the sand out of them, and our faces taking a beating. At one point Greg While pulled up beside me in his cart and said “I miss the rain!”

We only parked a few rigs yesterday, partly because so many people came in on Sunday as Early Birds, and partly because the high winds prevented some folks from traveling. I can’t say that I blame them. I hope they can make it in today.

The wind didn’t keep the Marines from flying, though. The Yuma Fairgrounds is located right across the street from the Marine Corps Air Station, and all day long fighters and other military aircraft are coming and going. Yes, it gets noisy, but as I keep telling people, that’s the sound of freedom! Here is a picture my pal Judy Rinehimer took of a big plane coming in for a landing. They do rattle the windows a little bit, but I’m glad they are on the job, working to keep us all free. 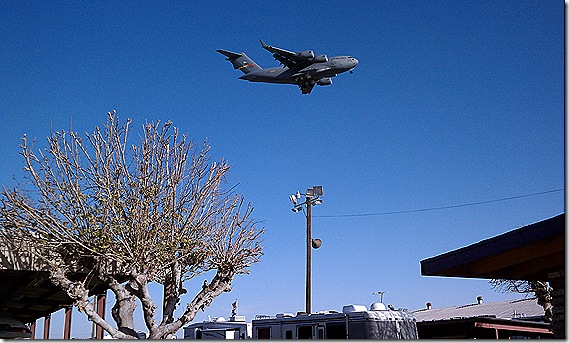 We had our traditional 3 p.m. Welcoming Ceremony, and I was able to get a laugh or two out of the crowd. That always breaks the tension and gets things rolling in a positive way. There was a time when I was terrified of speaking in front of a crowd of people and now I just love getting up there and being a ham,. 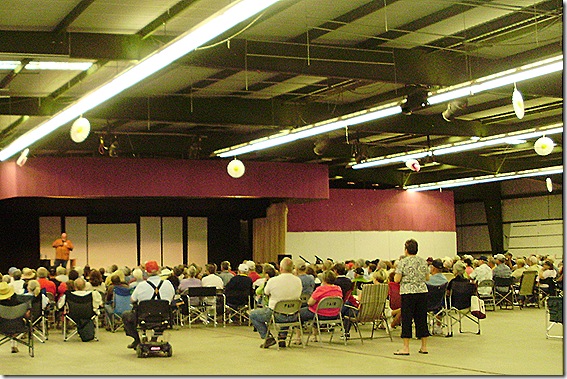 After welcoming everybody and thanking all of our hard working volunteers, I had the vendors come up on stage to introduce themselves, and tell the audience a little about their business. Terry and I spent many years on the RV rally circuit as vendors, and we know how hard it can be for them to make a living at it, so we try to give them as much help and exposure as we can at our rallies. We must be doing something right, because a lot of them come back to our events year after year. The extra fees they pay for their vendor booths goes a long way toward helping to cover rally expenses. 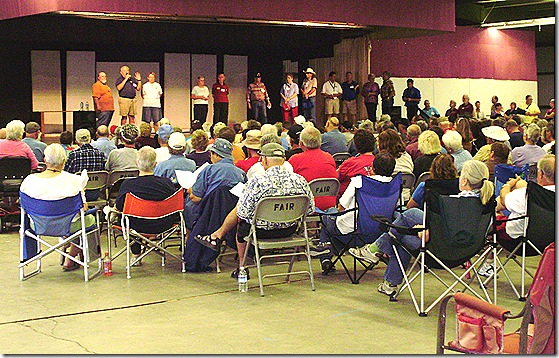 Here is a picture of just a small part of the vendor area. We have vendors here selling everything from dietary supplements, to rooftop satellite dishes, RV supplies, tire pressure monitoring systems, discount campground memberships, and a lot more than I would ever have room to list. 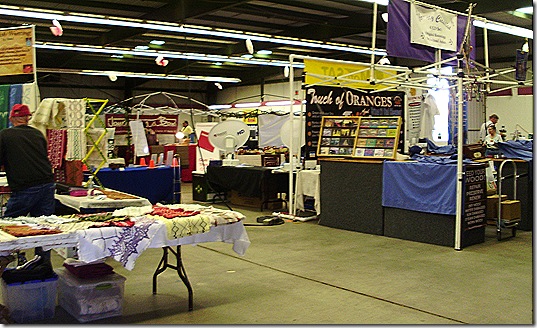 After  the vendor introductions, I led an Ask The Experts panel discussion, in which we had some long term RVers and RV tech people on stage fielding questions on everything from traveling alone as a woman, to diesel fuel additives, RV tire life, mountain driving, and lots of other topics.

We took a quick break for dinner, and then were back at it at 7 p.m. Before I started announcing door prize winners, Captain Staci Reidinger, director of public affairs at the Marine base, spent a few minutes telling the crowd about the role the Air Station plays in training pilots and air crews for service overseas, and shared some of her experiences from her tour of duty in Afghanistan. Then she took questions from the audience. Being an old veteran myself, I was very pleased with the standing ovation Captain Reidinger received from our people.

Here is another Marine, though he’s been retired for quite a while now. Bill Becker mans our booth selling rally T-shirts, and he and his wife Mabel are two of the most loyal, dedicated friends anyone could ever ask for. Semper Fi, Bill. 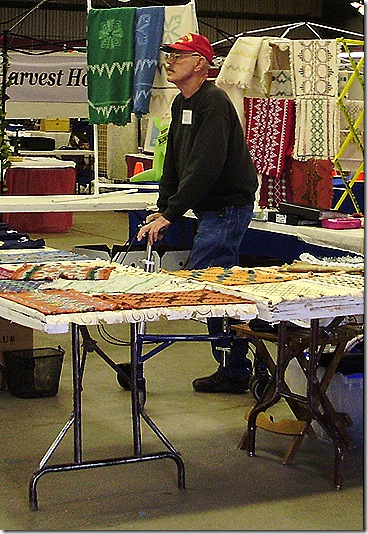 We had a great time during the door prize drawings, and there sure were a lot of laughs! No matter how hard we work putting these rallies on, if we can keep the folks happy and laughing, we know we’ve done or job. Yeah, we’re having fun now!

Thought For The Day – If a tree fell on a florist, would he make any sound?

3 Responses to “I Miss The Rain”