We slept in yesterday morning, and then spent a couple of hours checking e-mail, catching up on our favorite RV blogs, and just enjoying not having to be any place, or doing anything. Sometimes that’s a nice feeling.

We had several orders to fill that had come in during the rally, so Terry put them together and got them ready to mail out. About about 2 p.m., we left the fairgrounds and drove to my cousin Beverly’s house to pick her up, and then stopped at a post office to drop the orders off. By then we were famished, so we stopped at a Chinese buffet for an early dinner.

The food was okay, nothing to rave about, but what really kept us from enjoying our meal was a little girl of about three years old, who was there with her father and brother, who were sitting across from us. The girl kept wandering around, coming up to our table and sticking her chin onto the edge of the table and just standing there, while Dad was in La La Land and totally ignoring her. When she wasn’t at our table, she was off at somebody else’s, and her father was totally oblivious. Some people shouldn’t be allowed to have goldfish, let alone children.

From there, it was back to Beverly’s house for more visiting. We always have fun with Beverly, and any time we’re in Arizona, we make it a point to spend a few days in Tucson so we can see her.

Several people have asked me what is happening with the RV Hall of Fame Museum in Elkhart, Indiana, after word went out a few weeks ago that the museum us in danger of closing, due to slowdowns in the economy and a lack of support from the RV industry. While we were with Beverly, I had a telephone conversation with Al Hesselbart, the museum’s historian. Al told me that there was a meeting yesterday with several movers and shakers in the industry, and that the consensus was that they would step up to the plate to help keep the doors open. Al also said that the museum’s creditors have expressed a willingness to work with the board of directors, if it looks like a solution to their financial crisis can be found. I sure hope so, because this is a wonderful facility that needs to continue operation.

I was sniveling about our tire the last couple of days, but an e-mail from my friend Russ Maxwell reminded me that no matter how bad things are, there is always somebody worse off. Apparently, an RVer at a campground near Russ tried to drive off without first closing his bedroom slide, and this was the result. Ouch! 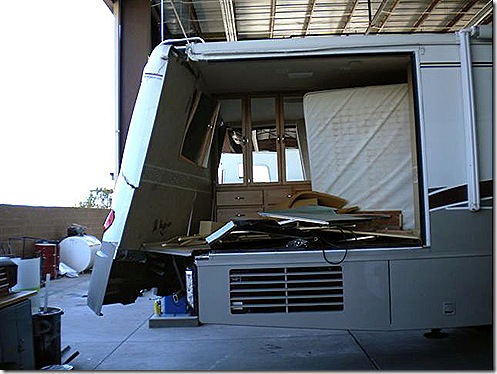 We got back to the fairgrounds about 7:30 p.m., and Greg and Jan White came over a little while later to visit. They had just finished a nice dinner at a Mexican restaurant in town, and when I suggested it was about time for our traditional Dairy Queen run, they begged off, saying they were still full from dinner.

Okay, I can understand that. But what about me? I have needs too! I suggested that if they were not hungry, at least Greg could drive me to the closest Dairy Queen and buy me a chocolate milkshake. But, being the selfish guy he can be when we scrape away that thin veneer of civility, Greg wouldn’t take me up on my suggestion.

So here I sit, DQ deprived, just trying to get by. As the lyrics in that great old John Denver song says, Some days are diamonds, some days are stones. If I were a lesser man, I would suggest that everybody log onto Greg’s blog, Our RV Adventures, and leave a comment telling him that he is being really selfish, but I’m above all that.

However, if you feel the need to express your dismay at his steadfast refusal to meet my basic needs as a corpulent human being, I won’t stand in your way. 🙂

Thought For The Day – Insanity is my only means of relaxation.