We did some time traveling yesterday, but don’t worry, we’re back in the 21st Century now, safe and sound.

Our friends Jerry and Suzy LeRoy drove up from their lot at the Escapees RV co-op in Benson, Arizona to visit us. It had been way too long since we saw Jerry and Suzy, and there were plenty of hugs all around when they arrived. The last couple of years they have been sitting still in Benson, where Jerry is on the board of directors at the co-op, but they are eager to get back out on the road for a few trips in the near future.

After visiting for a while, we decided to drive into town and have lunch at the new Five Guys burger place on Broadway, since Jerry and Suzy had never tried Five Guys yet and it is a favorite of Terry’s and mine. Unfortunately, when we got there, the place was packed, and we could hardly get in the door. We quickly decided to go someplace else.

Just a mile or two west on Broadway, we stopped at Little Anthony’s Diner, a 1950s style restaurant that is a part of the Gaslight Theater. Since the late 1970s, the Gaslight has been presenting wonderful live melodrama productions that have become a popular entertainment venue here in Tucson. If you have never been to a melodrama, you don’t know what you’re missing. It’s an interactive experience, where the audience hisses and boos the villains, and cheers and applauds the heroes. It’s great fun! 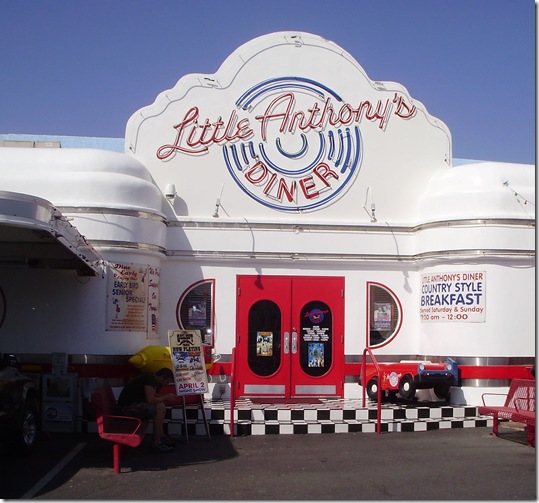 Little Anthony’s is decorated inside in classic diner style – chrome and formica tables, vinyl covered booths, and the walls are covered with advertising signs and photographs of 1950s era movie and music stars. 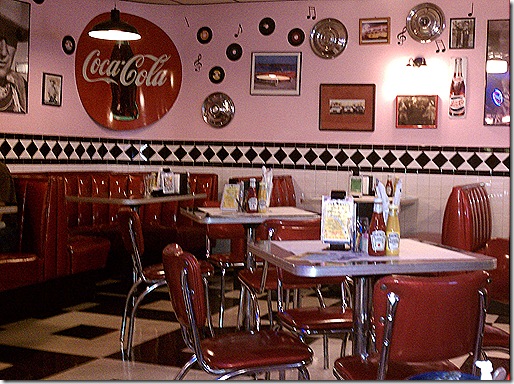 The food was good, and the conversation with our friends was even better. We talked about RVing, life in the Escapees co-op, Gypsy Journal rallies, our families, our mutual friends, and future travel plans. Before we knew it, our plates were cleaned, our tummies were full, and we still weren’t talked out! But alas, we had some errands to do during the afternoon, and Jerry and Suzy needed to make a stop at Costco before heading back to their casita in Benson. Before we parted company, Jerry set his digital camera up on a tripod, and used the timer to get a picture of the Four Gypsies. Thanks for coming to see us, Jerry and Suzy! 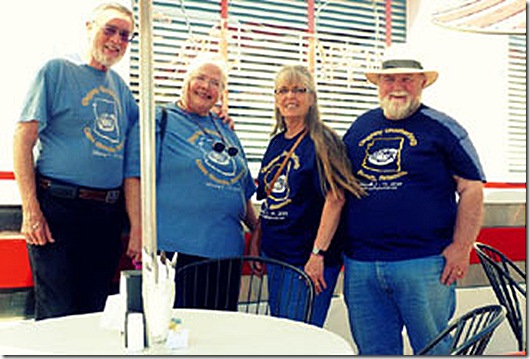 After we left the restaurant, we drove to my cousin Beverly’s house and spent some time with her. Bev has been dealing with a lot of medical issues lately, and we always like to spend as much time with her as possible when we’re in Tucson. There are usually a couple of little chores that need doing to make her life easier, and always a lot of laughs to share. Beverly is more like a sister to me than a cousin, and we have shared a lot of good times, and helped each other through some bad times, over the years.

Later on, we drove to a nearby Eegee’s to meet Greg and Jan White. Terry and I were still full from our late lunch, so we just had the frozen fruit drinks that are Eegee’s specialty, while Beverly, Greg and Jan had sandwiches. After their meal, Greg said I was still batting a thousand in my choice of restaurants we’ve introduced them to here in the Old Pueblo.

Driving back to the fairgrounds, we admired the huge moon rising over the desert. It was an awesome sight.

Today we don‘t have much of anything planned. We will enjoy some of Miss Terry’s freshly baked cinnamon rolls for breakfast (Yummy!) and probably hang around the motorhome, get some paperwork done, and I’ll try to get Terry to cut my hair. I also want to look at making some changes to my AdSense account. For the last six weeks, even though we have maintained the same number of daily blog readers, the same kind of ads, and the same number of daily clicks on those ads, my commissions have been less than half of normal. A lot of blog publishers are complaining about the same decrease in revenues. I suspect that the folks at Google have done some tweaking to their way of counting clicks, which they do every so often. I guess they must think I’m living too high on the hog on those huge checks they are sending me every month, and need to be taken down a notch of two. :)

Bad Nick has been busy, posting a new Bad Nick Blog titled Maybe We Need Bullies. Check it out and leave a comment.

Thought For The Day – One of life’s mysteries is how a two pound box of candy can make you gain five pounds.