Yesterday was a great RV traveling day. We started late, finished early, put on 230 miles, saw some pretty country, and arrived in one piece, with no breakdowns or troubles. It just doesn’t get much better than that!

We pulled out of the Pima County Fairgrounds RV park at 10:30 a.m., and had a little bit of traffic on Interstate 10 going through Tucson, but nothing to slow us down or cause any concern. We pulled into the RV fuel island at the Flying J truck stop in Eloy and took on 51 gallons of diesel at $3.91/gallon cash price, and then continued on to Phoenix.

Traffic is always heavy in Phoenix, but we made good time, picked up Interstate 17, and started the long climb up out of the Valley of the Sun. It was 92 degrees outside,  and we passed a sign advising drivers to turn off their air conditioners to avoid overheating, but our Winnebago diesel pusher never flinched. At one point our speed dropped down 38 miles per hour on one short, steep climb, but I just stayed over in the right and let faster traffic pass us by. 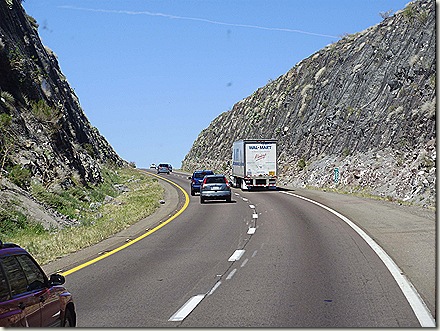 Of course, what goes up must come down, and we had several downhill runs of 5% to 7%, but I kept the Allison transmission in fourth gear and the exhaust brake held us back just fine. 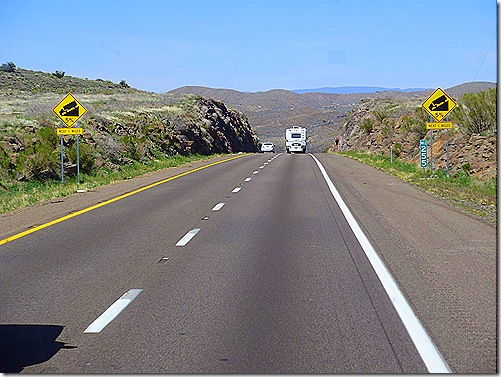 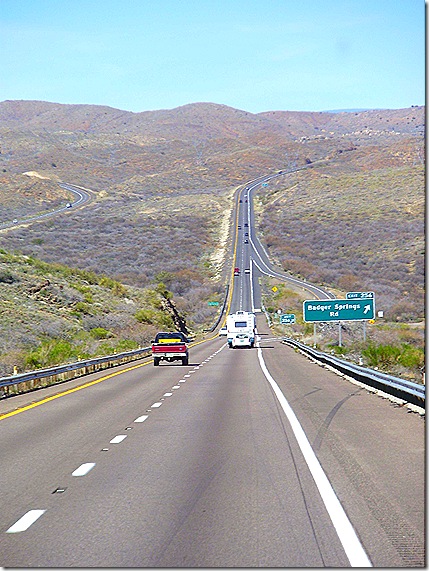 At one point we passed a runaway truck ramp, and I was glad I’ve never had to take that desperate option when driving an RV in the mountains! 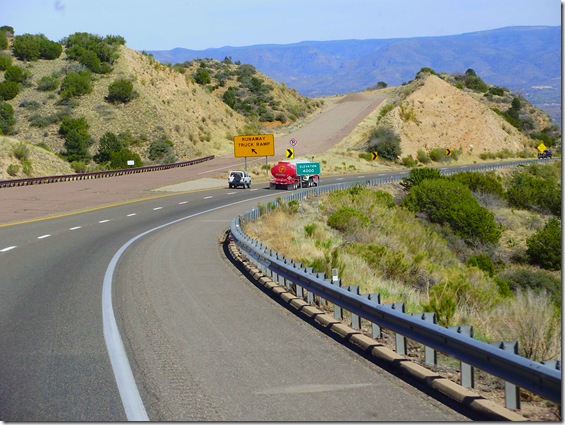 I remarked to Miss Terry again how different it was driving the Winnebago, compared to our old MCI bus conversion. When we first bought our motorhome, my good friend Ron Speidel, told me “Your life just changed.” At the time, I really didn’t understand what he meant, but now I do. We no longer have to worry if we can get up a steep grade without overheating, we don’t have to run radiator misters, and when we do get where we’re going, our dinghy isn’t covered with oil! Life is good. 🙂

Eventually we topped out at the rim of the beautiful Verde Valley, and drank in the view of mountains in every direction, and the red rocks of Sedona off in the distance. In my opinion, this is one of the nicer areas of Arizona. 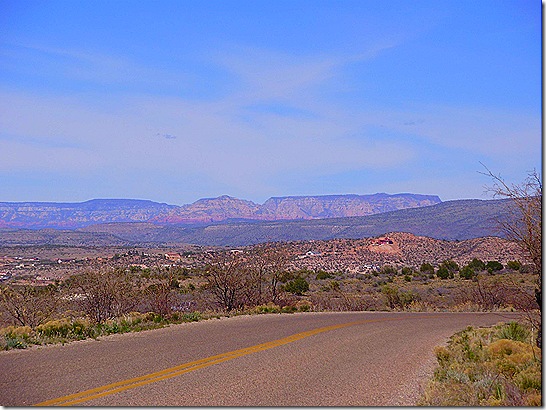 And I’m not the first person to feel that way; as far back as 10,000 years ago, nomadic hunters and pueblo-dwelling Indians called this place home, followed by Spanish conquistadores, cowboys, miners, and settlers. Several ancient Indian dwellings still remain, including Tuzigoot National Monument and the impressive Montezuma’s Castle National Monument, both carefully preserved for future generations to admire and appreciate.

We arrived at the Verde Valley Thousand Trails preserve about 2:30 and selected a nice pull through full hookup RV site with 30 amp electric. The campground is pretty busy, as snowbirds who are making their way north stop for a few days before they continue on to wherever they happen to be going. 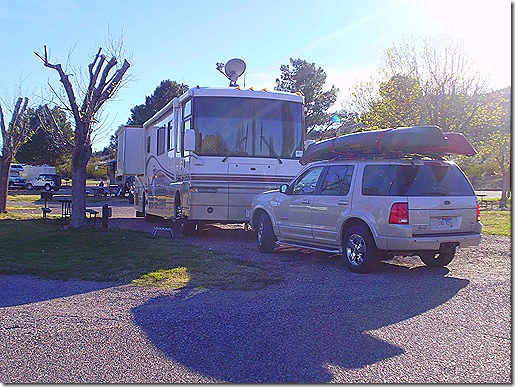 Once we were parked and settled in, we drove into the nearby town of Cottonwood for dinner at Vinnie’s Pizza. I liked my two huge slices of pepperoni just fine, but Terry wasn’t too impressed with her slices of supreme pizza, and we both agreed the garlic bread knots were mediocre at best.

Back at the campground, I took a quick nap, and we had a quiet evening watching TV and relaxing. A great end to a great driving day.

Thought For The Day – I finally got my head together, and my body fell apart.

3 Responses to “A Great Traveling Day”