I have to admit that we were not at all surprised when the fellow from Awning Man, the mobile service that installed our slide covers, never showed up as he had promised to yesterday, to fix the sloppy awning we complained about. When he left here the other day, Terry and I could tell that he was one of those guys who is happy to take your money, but wants to forget who you are the minute your check clears the bank.

It’s pretty sad that some business people can’t see the big picture, and that taking care of customers pays off in the long run. But it’s been my experience that those kind of people are their own worst enemies. Somebody asked the other day why I didn’t name the company in Saturday’s blog, after writing about how he tried to pass the blame for the sagging awning, instead of taking any responsibility.

I didn’t do that because I believe in giving everybody an opportunity to do what’s right. Who knows, when he was here he may have been having an off day, or just have come away from an encounter with a surly customer, or been cut off by somebody in traffic. I’ve had some bad days in my life, when I probably didn’t come across all warm and fuzzy. But when somebody makes a promise to return and fix the mistakes he made, and then stands me up, I’m done with them. I’m always happy to recommend good service companies and vendors, but the Awning Man, based in Tempe, Arizona is not somebody who will ever get our endorsement. Nuff said.

While we were waiting for the awning guy to be a no-show yesterday, Miss Terry made up a batch of fresh rye bread. Her dad loves real rye and pumpernickel breads, not that bland stuff you buy in the supermarket, and whenever we’re in town she tries to bake him some loaves. When she took it over to her dad, it wasn’t long before he was smiling and enjoying a sandwich.

While she was doing that, I logged onto Amazon.com to order the new Garmin 465T trucker GPS unit I wanted, and was confused because they had it listed twice, with a difference of about $70 in the price. The model number and description were the same, the only difference I could tell was that the less expensive one was stocked and shipped by Amazon, while the pricier one would come from a third party.

I called Amazon to ask what the difference was, but the young lady I talked to was obviously outsourced, and her English was so poor that I had trouble understanding her. I called back again, to a different number I found on Amazon’s website, and this time I got a nice older gentleman who said he was in North Dakota. He was very helpful, and explained that the only difference was that the third party sellers could charge whatever they wanted, while Amazon offered the lowest prices on items they had in stock. I bet it’s not hard to figure out which one I ordered! I’ve done a lot of research, and talked to several people who have the 465T, and I think it’s the best unit for our needs. 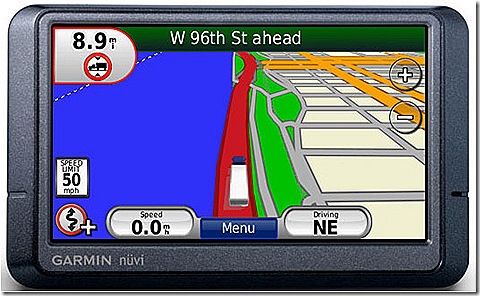 While I was researching GPS units, I came across a neat website called GPS Magazine that has a lot of good information, and reviews on all kinds of GPS units. Check it out and see what you think.

Another neat website you might want to check out is the Ultimate Campground Log. Our good friend Patti Ivey recently made the hard decision to shut down the RVers Notebook, which she had continued for several years after the loss of her husband Mickey, who originally developed the program. The Ultimate Campground Log is a free download, and has a lot of the features the RVers Notebook offered.

About 6:30, we met Odel King and Laurie Brown at a restaurant called Blue Adobe Grill for dinner. Terry has been following Odel and Laurie’s blog for a while now, and got me hooked on it, so we were looking forward to meeting up with them. What a fun couple! We had a good time talking about the fulltime RV lifestyle, the recent upgrades they had done to their their Travel Supreme motorhome at RV Renovators (which they are thrilled with), the chore of moving out of their motorhome while the work was being done and then moving back in again, and at least a dozen other topics as they came to mind.

I invited Laurie and Odel to come to our rally in Yuma next month, but that darned Odel is one of those self-centered guys who thinks the whole world revolves around him. It seems he is scheduled for knee replacement surgery in California at the same time as our rally, and he thinks that’s more important. The nerve of some people! 🙂

We had a great time with Odel and Laurie, and we are really looking forward to crossing their path again one of these days.

Thought For The Day – Do something – It may be wrong, but do something.