The fabric on the slide topper awnings on the two slide rooms on our motorhome had become very frayed and nasty looking, so when we were here in Apache Junction last year, we had a mobile awning repair company replace  them. Since the company was recommended by a friend who is an A&E factory rep, we thought we’d be getting a good installation and good service. A year later, we’re reevaluating that opinion.

Within a few weeks of the installation, the awning cover on our living room slide seemed to be sloppy. As I understand it, the fabric attaches to a roller inside the awning cover, and we thought that the spring should have been tightened more when the new fabric was installed. Over time it has just gotten worse.

The awning flaps terribly in any kind of wind, and when it rains, we get a lot of water on top of the slide room, which is what the awning is supposed to prevent. Instead of running off the awning with the slant of the design, the fabric is so loose that it sags and the water builds up until it spills over the side. When we try to pull the slide room in, we had to stop and start several times, to give the water time to run off. At the same time, the awning will be so stretched that instead of rolling up properly, it will bunch up between the roller and the top of the slide room. By the way, the owner’s manual that came with our motorhome specifically says NOT to start and stop the slide room when retracting it. Now that we’re back in town, we called the company and explained the problem. The tech said he would be here yesterday at noon to look at it.

He arrived 30 minutes late, with no apology or explanation for his delay. When we showed him the awning, he said that whoever had installed the new fabric had done a bad job. Terry reminded him that HE was the one who had installed the fabric, and he immediately backpedaled faster than a politician retracting campaign promises the morning after election day.

I can handle it when somebody messes up on a project. Lord knows, I have a long history of flubs and failures. But when somebody does sloppy work, and then wants to pass the buck and make excuses, they turn me off really fast.

By then, I had no faith in this clown at all, and I could see steam beginning to come out of Miss Terry’s ears, she was so angry with his attitude. He told us that it was more than a two person job to fix the awnings (even though he did the replacement by himself), and said he would be back on Sunday with a couple of helpers to “take a look.” He also repeated, for the third or fourth time, that the problem obviously wasn’t in his installation, but in Winnebago’s choice of awning covers in the first place. Then he jumped in his truck and was gone.

I really don’t expect him to return, but I’m giving him the benefit of the doubt before I mention the name of the company. We’ll see what happens on Sunday.

A while back Gary Smith sent me a set of his Learn RV Awning Repair DVDs to review, and they are an excellent guide to anybody who wants to start their own awning repair business. Terry and I watched the DVDs, and one explains the procedure to tighten the tension on an awning rewind spring. If this guy doesn’t get back to us, I know that once we meet up in Yuma, my buddy Greg White can probably adjust the tension for us, using the instructions in the DVDs as a guide. 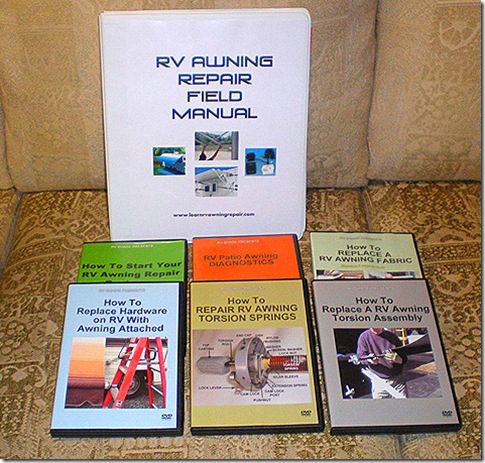 Now, don’t go thinking that I’m exploiting Greg again! I keep him busy for his own good. As his lovely wife Jan says, if Greg is left unattended he tends to wander off and get into mischief. If he’s up on a ladder working on my awning, we can keep an eye on him.

Thought For The Day – I don’t get even, I get odder.