Nick's Blog » Not Much Visible Progress

In yesterday’s blog, I promised you more pictures of our TV cabinet upgrade project. But as I learned when we were converting our MCI bus years ago, there are times in many projects where, while there is a lot of progress being made, not very much of it is visible. Yesterday was such a day.

We were out of bed and ready to greet the day by 7:30 a.m., which is a horrible hour for night owls like us. But we wanted to be ready when the crew at RV Renovators knocked on the door, which they did a little after 8 a.m. Office manager Cinda Nelson was gorgeous and chirpy, which I love in a woman anytime after noon. Before that, it’s just annoying!

Just joking, Cinda. You can knock on my door anytime of the day or night, darling! 🙂

Billy was right behind her, carrying the new side for the bedroom cabinet, which he wanted to dry fit. Billy is a nice young fellow, whom I have enjoyed teasing and picking on while we’ve been here, but he’s also very competent, and dedicated to turning out top quality work. Here he is dry fitting the side, one of many times he would do it during the day. Perfection is a slow process. 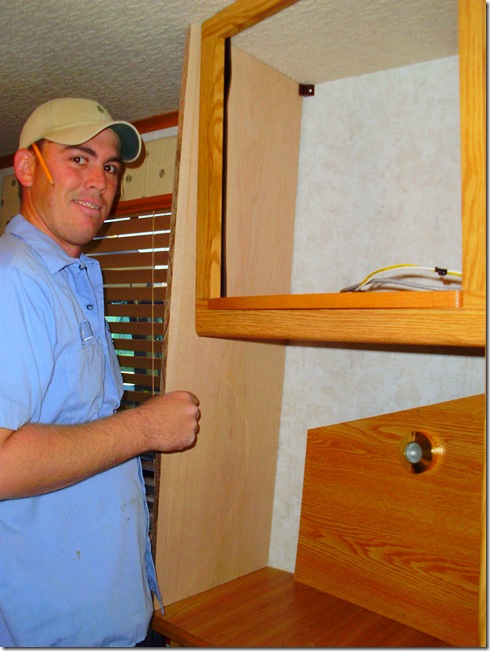 Much of the day was spent in just that manner; we wouldn’t see anybody for a while, and then Billy would come in, sometimes with one of his helpers, do some more measuring, or dry fitting a piece, and then away they would go until the next time.

We spent the day working on chores for our upcoming Yuma rally, answering e-mails, and processing several rally reservations that came in. Our Verizon air card works much faster here than it did in Apache Junction. RV Renovators also has free WiFi available so their customers can get online, if needed.

By the end of the day, Billy and crew had fitted the new base into place in the front TV cabinet, to give us a level base, as opposed to the slanted bottom that we started out with. Billy told us that all of the pieces for the bedroom TV cabinet were stained and ready to go, but that he wanted to let them set in the shop overnight to give the fumes time to ease up, so we were not asphyxiated. Well yeah, I can see where not killing your customers is probably a good business strategy. 🙂 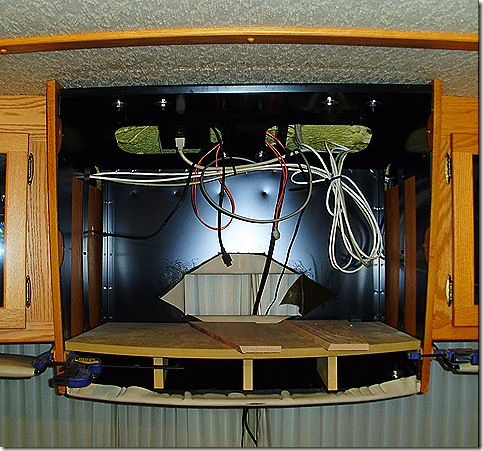 While all of this was going on, our friend and longtime Gypsy Journal subscriber Dick Lavigne stopped in to say hello. Dick and his wife, Gaye, are staying at an RV park just up the street, and when he read in the blog that we were here, he wanted to come by and see what kind of mischief we were getting into. If you ever think that RVers are all retired old farts who spend their days sitting around in camp chairs under their awnings watching the world go by, you haven’t met my pal Dick yet. When he hit 70, Dick decided that he needed a new way to get into trouble, so he bought this first motorcycle. He quickly graduated up from a scooter to an 1100cc Honda, and now to a huge Gold Wing. Way to go, Dick!

Later on, Terry’s sister Lisa came by and spent several hours with us. I always like being around Lisa, because she’s not only funny and smart, she’s drop dead gorgeous too! I keep telling Miss Terry that if we ever get divorced (which will never happen), I get custody of Lisa!

Once the crew here knocked off for the day, Terry, Lisa, and I went to Five Guys for dinner. I sure am glad that one of our favorite burger chains has extended its area into Arizona, because they are really good!

Back at the motorhome after dinner, getting up early was catching up with me, so I took a little nap, waking up just in time to sample some delicious peanut butter cookies Terry had just baked, washed down with a glass of cold milk. Yummy!

I mentioned above that we were getting in more reservations for the Yuma rally. There seems to be a glitch in the Early Bird registration link on our website. It will work for several people, then  it suddenly stops, and then it works again. PayPal can’t figure it out, and neither can I. We do still have lots of room for Early Birds, so if you want to come in on Sunday, and can’t get PayPal to cooperate, just use the regular registration option, and you can pay the balance due ($15) when you get to the fairgrounds.

One request we had after last year’s rally was for a food vendor. As of now, we have two food vendors registered. One sells mini donuts and other goodies, and the other will be offering kosher hot dogs, brats, and other things that I’ll be lining up to scarf down at noon.

Also in answer to requests by attendees at earlier rallies, we will have several craft classes, as well as an afternoon craft and hobby show and tell. We’re even going to have a golf cart rodeo, which will be a lot of fun. Check out the schedule on the Rally Registration Page. As you can see, we’ll have a lot going on, and I’ll be adding even more seminars as we get closer to the rally dates. For anybody wanting to take the two-session Swedish weaving, knitting, or crochet classes, please be aware that there will be size limits to those classes, and a small fee may be charged to cover supplies used in the class.

So today’s another day, and Billy tells me that by the time he gets done this afternoon, I’ll definitely have new pictures to share with you in tomorrow’s blog.

Thought For The Day – When I was a kid, social networking meant playing outside.

6 Responses to “Not Much Visible Progress”