Nick's Blog » No Rest For The Wicked

My dad used to say that there is no rest for the wicked, and I must be one evil old son of a gun, because I sure haven’t been able to get much rest lately! By the time Miss Terry finished proofing the new issue of the Gypsy Journal and I made the corrections, then uploaded it to our printer’s FTP site, took a shower, and climbed underneath the covers, it was 3 a.m.yesterday morning. But it was worth it to have that task behind us.

I was all for sleeping until noon, but I had to be up and ready to tape a couple of new episodes for my Just A Gypsy segment on RV News Net. That went okay, and we were done by about 1:30 p.m. I made a couple of phone calls, answered some e-mails, and then we headed out to run some errands.

We dropped some things off at the post office, stopped at the bank, and then drove thirteen miles to RV Renovators, in Mesa. These folks do wonderful work; we have seen some of the RV upgrades they do, and were very impressed. We are having them build doors over the openings to the living room and bedroom cabinets that once held the original TVs in our Winnebago, and they then will mount the flat screen TVs we replaced the heavy old TVs with on those doors. That will give us more storage space, which every fulltime RVer can always use.

We had hoped to catch Odel King and Laurie Brown at RV Renovators, because they have their Travel Supreme diesel pusher there having some major upgrades done. Terry has been following Odel and Laurie’s blog for quite some time now, and we were hoping to meet them in person. Unfortunately, they weren’t around, but we did get to see their motorhome. Is that like taking the Hollywood star tour and driving past celebrities’ homes? 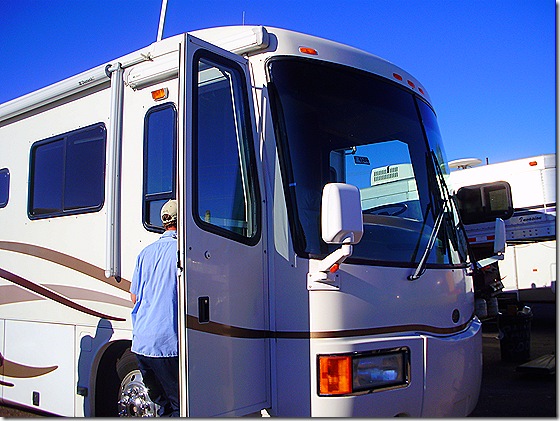 We chatted a bit with office manager Cinda Nelson about the seminar she will be doing on Tips For Renovating Your RV at our rally in Yuma, and then talked to the fellow who will be doing the doors for our TVs. He and Terry got into a discussion about shortening the existing cabinet in the front of the motorhome, which will reduce the storage space a little bit, but minimize the chances of banging my head on the corner of the cabinet when I come in the door. I’ve done that a time or three, and it really hurts! I’m not sure what the decision was on that, but I’m sure whatever they come up with will be fine.

We use different commercial mailing services around the country to handle mailing out the paper to our subscribers, and I had been trying to call the one we use when here in the Phoenix area for two days. But I kept getting a message saying all circuits were busy, even though calls we placed to any other number went through with no problems. So once we left RV Renovators, we drove another five miles to the mail service to let them know that we would have a mailing to be sent out soon. I had a bad feeling when I couldn’t reach them by telephone, and that was confirmed when we arrived to find the place empty and them out of business. So today I’ll be shopping around for a new mail service to handle our job.

By then it was 4:30 and traffic was starting to pick up, but we still made good time driving back to Terry’s parents house to pick up a package that Terry had sent there. We were only able to visit for a half hour or so, then we had to leave to meet our friends Ed and Alice Allard at our favorite Chinese restaurant, #1 Eastern Super Buffet.

We met Ed and Alice in our first year on the road as fulltime RVers, and have crossed paths with them many times over the years. They purchased a park model in an RV park, here in Apache Junction, a couple of years ago, but still have a small motorhome that they use for short trips. We had not seen Ed and Alice since our Gypsy Gathering rally in Yuma last year, so it was fun to get together again to catch up and swap stories. We had a wonderful time visiting, the food was as delicious as always, and by the time we got home it was a little after 8 p.m.

I’d have been happy to stretch out on the couch for a nap, before I got ready for bed. But like my old man always said, no rest for the wicked. I had a lot of e-mails that had piled up during the day that needed to be dealt with, a blog to write, and then a wait until midnight to post the blog. Darn, I should have been a better person back in my youth. This karma thing sucks! 🙂

Thought For The Day – Nostalgia isn’t what it used to be.

7 Responses to “No Rest For The Wicked”