We pulled out of Patio Gardens yesterday morning and drove a few miles to RV Renovators in Mesa, arriving about 10 a.m. so they could start working on our TV cabinet upgrades. Since it was only thirteen miles, we didn’t bother hooking up the Explorer and towing it, Miss Terry just followed me.

The place was busy, as always, but I found a place to park among several other high end motorhomes. 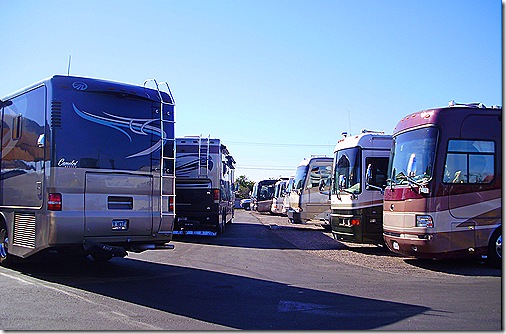 We went inside to check in with office manager Cinda Nelson. Within a few minutes, one of their crew had moved our Winnebago into a work bay, and after going over the details of our project with Cinda and Billy, we went out to the motorhome to see what was happening.

Not much was happening, actually, as Billy was putting the finishing touches on another rig, and then it was lunch time. I tried to take advantage of the lull in activity to nap on the sofa, and right after lunch Billy and one of his co-workers came in and started working on the bedroom TV cabinet.

The first order of business was to take it apart, and then match the wood. After that, there was even more measuring and fine tuning. I remembered the old carpenter’s first rule of “measure twice, cut once” and was glad that Billy takes the time to do the job right the first time, rather than butchering it, and then going back to try and cover up his mistakes.

Here is what we started with in the bedroom when we first bought the Winnebago, with the original TV that came with the coach. 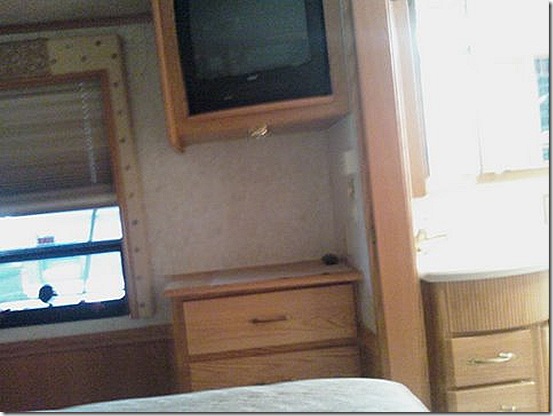 And here we are, as of yesterday morning, with our 19 inch Vizio LCD television sitting in place. Up until now, when we traveled, we would take the TV out and lay it on the bed. When this project is finished, the TV will be mounted permanently to a door on the cabinet. We debated whether or not it is worth getting a bigger TV for the bedroom, and decided it’s probably not worth the money.  Unlike a lot or RVers we know, we pretty much enjoy the same TV programs, so we never watch two different programs in two different rooms. The only time we use the bedroom TV is to watch for a while before we roll over and go to sleep at night. 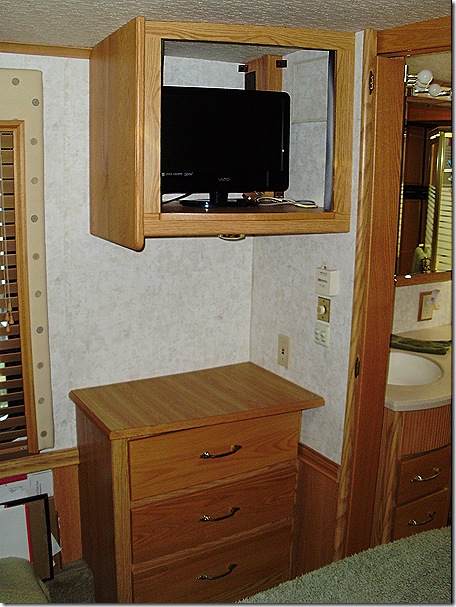 Manual labor bores me, and I decided to take a stroll around the place, before somebody put me to work. This is what happens when an idiot in a car pulls out in front of a big RV, and then slows down. We’ve had it happen to us many times. Car drivers don’t understand that these things don’t stop on a dime! But I know that by the time RV Renovators is finished, this Newmar will look as good as new. Maybe even better! 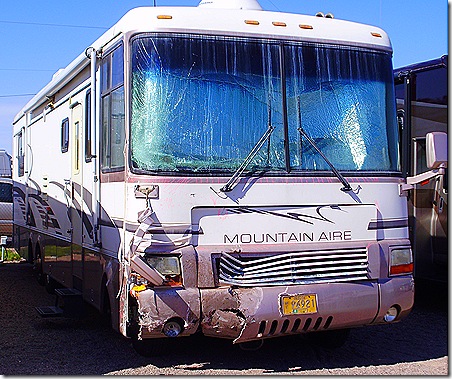 By 5 p.m., Billy had the old TV cabinet taken apart, the new side cut, and ready to put in this morning. When everything is done, a solid oak board will extend the cabinet down to the dresser below, and will have shelves to provide extra storage. 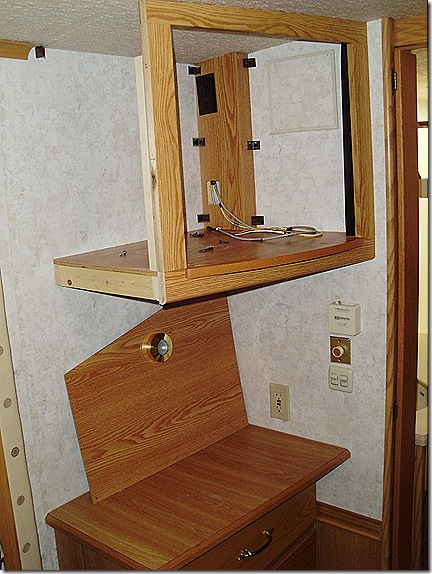 When the crew knocked off for the day, it got a lot quieter around here! We are locked inside the fence, still in the woodshop bay, with 30 amp electric. Billy offered to run a water hose out to us as well, but we have a full fresh water tank, so I told him we didn’t need it. One less thing for me to trip over. RV Renovators also has a dump station, if needed, but I dumped the day before, so we’re okay.

Once things quieted down, I had a Skype video call with our friends Ron and Brenda Speidel, who are spending the winter in Mission, Texas. What cool technology, to be able to see our pals and talk to them at the same time! I like it! Skype can eat up a lot of minutes, but since our Verizon air card is grandfathered in with unlimited data usage, it’s no big deal for us. If you have a 5 gig limit, which a lot of air cards do, you might find yourself going over if you use Skype a lot.

We have a key to the gate so we can come and go as we please, but we were nice and snug camping here at the shop, so we just had a quiet dinner at home. Since we’re inside the work bay, our satellite TV dish wouldn’t work, but that was okay. We just listened to some nice music all evening long from my iPod in its Bose sound dock. Life is good.

Billy said he hopes to have the job done in three days, but we’ve camped at enough RV repair shops over the years to know that sometimes unexpected things happen, so we’re keeping our plans written in Jello, as all fulltime RVers do. We know we’re in good hands, and we have to be someplace, so it might as well be here.

I’ll have an update and more pictures tomorrow.

Meanwhile, Bad Nick posted a new Bad Nick Blog titled Doesn’t An Employer Have Rights Too? Check it out and leave a comment.

3 Responses to “Camping At The RV Shop”