After spending a chilly night parked at the VFW post in Abilene, Texas, we had a great time yesterday exploring a couple of attractions in the Abilene area. There is a lot to see and do there, but a couple of places we wanted to check out were closed on Mondays, and we didn’t have time to hang around any longer. But the ones we did get to were outstanding.

Our first stop was at Frontier Texas, an award winning museum that uses state-of-the-art technology to brings the Texas frontier experience to life, and puts visitors in the middle of attacks by Indians and wolves, a buffalo stampede, a card game shootout, and a prairie thunderstorm. We’ve been to a lot of museums over the years that employ special effects to tell a story, but this place rates in the top three, in my opinion. I’ll have a feature on Frontier Texas in an upcoming issue of the Gypsy Journal, but in the meantime, if you’re traveling through this area, make the time to stop. You won’t be disappointed. 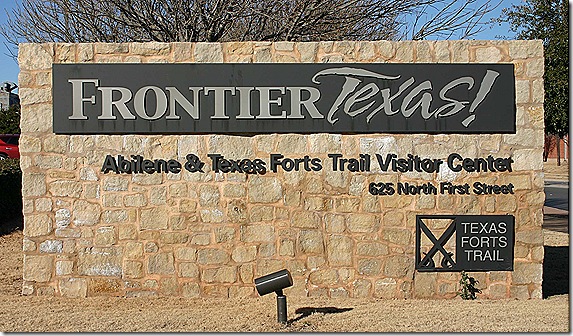 When we left Frontier Texas, we stopped at Golden Corral for lunch, and then proceeded on to our next stop, Buffalo Gap Historic Village, a few miles south of town. While Frontier Texas tells the story of the region’s settlement up until the 1880s, Buffalo Gap takes over and continues the saga though 1925. The village has over a dozen historic buildings, including the original Taylor County courthouse and jail, an early 20th Century doctor’s office, train depot, barber shop, blacksmith shop, schoolhouse, gas station, and print shop.

All of the buildings are filled with artifacts ranging from gruesome looking doctor’s utensils, to guns, furniture, farming equipment, and even an early day newspaper printing press. This was another great find, and I can’t wait to tell you the whole story in the Gypsy Journal, because we don’t have enough room here. 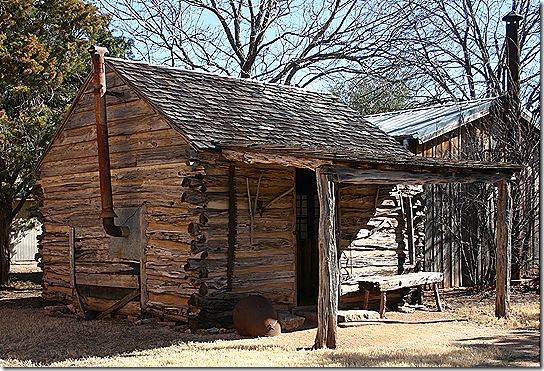 Both places had an excellent selection of regional history books, which is a weakness of mine, and I’m afraid I really blew the budget. But they are great research tools, and will lead me to even more stories to share with you down the road.

We left our motorhome at the VFW post while we did our tourist thing in the Explorer, so with our sightseeing done, we went back to the VFW post, hooked up, and hit the road about 4 p.m. We only had a short run of 44 miles to Sweetwater, where we parked for the night at the Elks lodge. $10 got us a 50 amp full hookup pull-thru site. I’m telling you folks, if you are a fulltime RVer or spend any time at all traveling in your RV, you are missing the boat if you don’t belong to the Elks, Moose, and VFW (if you are eligible).  It opens up a whole new world of overnight parking opportunities for you, at greatly reduced prices. Here is our rig at the Elks lodge. As you can see, it’s nothing fancy, but you can’t beat the price! 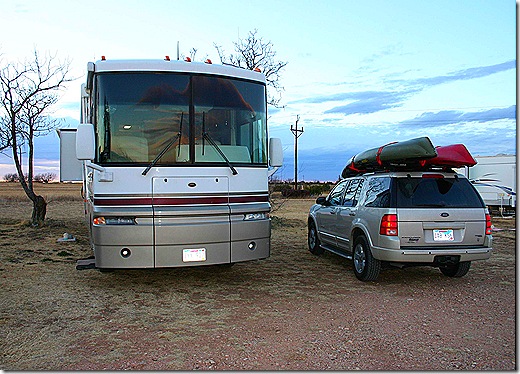 By the time we got parked and hooked up, it was getting cold and the wind had picked up. All evening it blew hard, rocking the Winnebago and rattling our slide toppers. But that’s not the worst of it. Little did I know that the weatherman still had a dirty trick or two up his sleeve! Snow!

Okay, no more Mister Nice Guy, I am officially ticked off! I have read my contract, and nowhere does it include a clause for snow! In fact, it specifically says NO SNOW! So what was the forecast last night? Uh huh. Yep. You got it. Snow! I highly disapprove, and if you don’t see a blog for the next week or two, it’s because I am officially on strike for better weather. I may be reduced to standing on street corners holding a cardboard sign that says “Will Blog For Sunshine.”

Today we’ll stop in Midland to catch a story or two, and we’ll probably end up at the Escapees RV park in Pecos for the night. And then we’re headed for Arizona just as fast as we can get there safely. Unfortunately, there has been a misunderstanding with several people, who assumed that we are going to Quartzsite. That’s not in our game plan. We’ll stop in Tucson for a day or two to see my cousin Beverly, and then go on to Apache Junction to visit with Terry’s parents and sisters for a while, before we go to Yuma for our Arizona Gypsy Gathering rally.

We’ve done the Quartzsite thing several times, and while it was fun, we’ve been there and done that. We don’t get enough time with Terry’s parents, and while they are both in excellent health, they are not getting any younger, either. My own parents have been gone for many, many years, but there were a lot of times I skipped visiting with them because I had other things to do instead. Funny, I can’t remember what even one of those ”other” things were, so I guess they couldn’t have been that important after all.

Thought For The Day – I saw a woman wearing a sweat shirt with "Guess" on it…so I said "Implants?"

4 Responses to “What’s That White Stuff?”