Okay, I promised another recipe, so here goes. With all of the cooler weather and all of the fall squash that is available, it was just a matter of time before I tried to come up with my own version of a store bought boxed (yuch!) soup I had seen advertised on television. It sounded intriguing, but I wanted my own pot of steaming beauty.  I decided  to begin by roasting the squash first. Happiness starts with orange. Mmmn.


I wanted to get as much surface as possible roasted, to deepen the flavor, so first things first. Peeling and cutting up a raw butternut and acorn squash is not for sissies. Last year I bought my son-in-law a Yoshi ceramic knife for Christmas and it came with a ceramic vegetable peeler, too. Turns out that at just under twenty dollars at WalMart, it was a good enough investment for me, too! Very carefully, I peeled and seeded both squash in short order, using these fine tools. Then I cubed them into chunks and put them on a baking sheet that I had lined with parchment paper (for easy cleanup). I drizzled some olive oil over them, and sprinkled with some good smoked paprika, and really got that orange thing going! 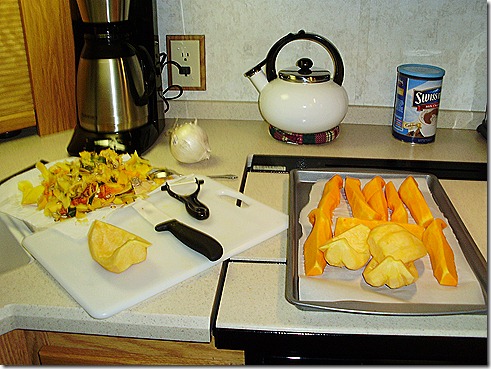 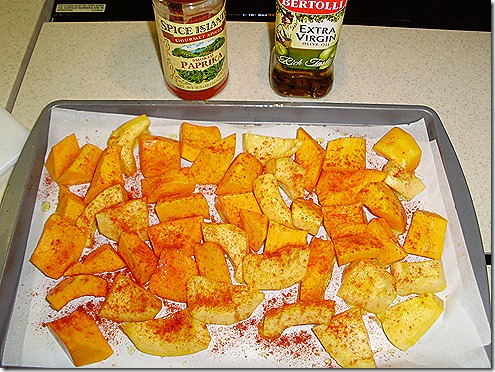 Okay, so now we can get down to business. Next step was to roast the squash in the convection oven, at 375 degrees, until I had some more good color going and the squash was tender, about an hour. (This will work almost exactly the same in a regular oven.) 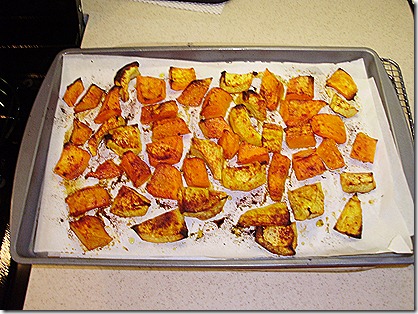 While the squash was baking, I diced a large white onion and sliced five good sized cloves of garlic and set them to sizzling in a large pot with 2 tablespoons of butter, over a medium high heat.

Once the onions and garlic were fragrant, I decided to throw in a zucchini that I had cut in half lengthwise and sliced, just for good measure. After all, isn’t this a squash soup?

Then it was time to choose. Chicken broth or vegetable broth? Decisions, decisions. I decided to go with the chicken broth, so I poured a 32 ounce box of broth into the pot, added my beautifully r 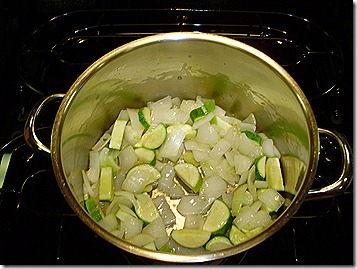 oasted squash, and turned the heat down to a moderate simmer.

Now I could add in the rest of the ingredients, once I decided what they were.  I didn’t think there was enough onion, so I added in a heaping tablespoon of dried onion flakes, and since the celery flakes were right there, and I didn’t have any fresh, a tablespoon of celery flakes went into the pot, too. I love basil, so I threw in a teaspoon of dried basil leaf and figured 1/2 teaspoon of celery seed would add to the blend, as well. Tamari sauce richens the flavor and the color, so a tablespoon of that went in, and you have to grind in some fresh black pepper and sea salt, to taste, of course, but there was still something missing.

The Spice Hunter, a really great brand of herbs and spices, has a great line of grinders, to  grind spices right into your favorite dishes, and one I really like, of the many I have tried and liked, is the Fiery Chile Fusion. It is a blend of black pepper, red pepper, green chile, green bell pepper, and chipotle chile, and it gives a wonderful heat and flavor. A couple of grinds, a stir and a taste. Okay, now we’re cooking.  You can find Spice Hunter Fresh Twist Grinders in a lot of grocery and health food stores or check them out at  www.spicehunter.com. 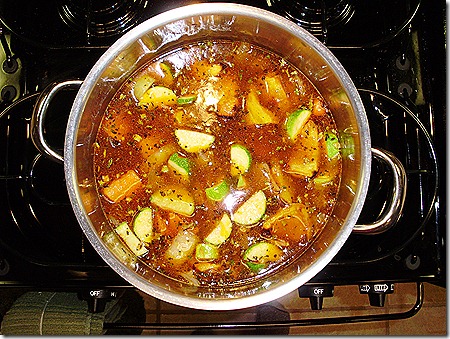 Simmer until vegetables are tender and flavors have had time to come together, at least 20 minutes. Taste, and adjust spices, if necessary. The soup can be served this way, but I was after a creamy, exotic, perfection.

Time to get out the immersion blender. (A regular blender will work but I’m not good at moving hot liquids into a blender only to move hot liquids again, back into the pot.) Immerse the blender into the soup be 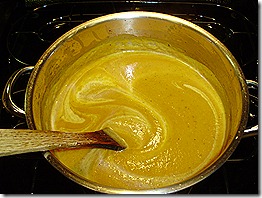 fore you turn it on, then blend until completely smooth and creamy. At this point, I decided to add about 1/2 cup of cream to the pot. 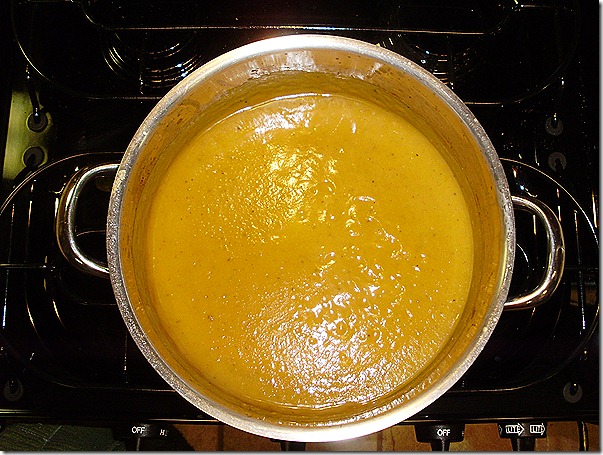 Great, no matter how you look at it! Yum!! Serve with a dollop of sour cream for a pretty presentation, but I liked it just like this.