Nick's Blog » Limping Along The Coast

Well, our trip west hasn’t gotten off to a great start so far. In fact, most of yesterday kind of sucked.

We were up bright and early, and Miss Terry did an excellent job getting the inside of our motorhome ready to travel, while I dumped our black tank and unhooked the utilities, went inside and started the engine, and then began to pull our living room slide in. Whenever we have had a lot of rain, as we did earlier in the week, Terry stands outside during this process and watches while I move the slide room in a few inches and then stop, to let the awning sweep push off any excess water. We repeat the process until the slide is all the way in. My buddy Russ Maxwell from Carefree of Colorado gave me this tip, and it prevents you from getting a cold bath from water left over on the top of the slide the first time you pull out of your RV site and stop. I’ve had that happen, and believe me, it’s better than a pot of espresso to get you wide awake for the day!

As I was bringing the slide in, Terry yelled for me to stop, and I knew something was wrong. She said the slide wasn’t coming in easily, and she knew why from past experience. She climbed onto the roof of our coach, and sure enough, a sheet of ice more than 1/4 inch thick had formed all the way across the top of the slide cover. Terry used a broom to push the ice loose and onto the ground, where it shattered like a huge window pane. What the hell is any self-respecting RVer doing in a place where it gets that cold anyway? 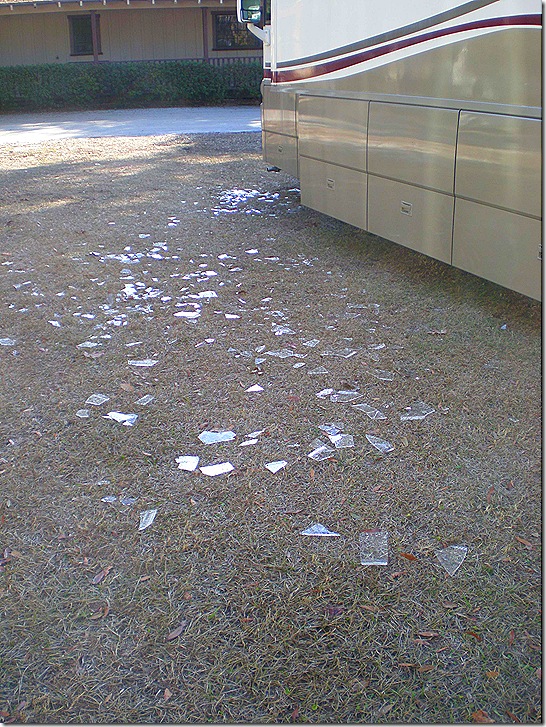 With that delay behind us, we got the Explorer hooked to the back of the motorhome, did our light and safety check, and pulled out of Sumter Oaks about 10:30. As soon as we were on Interstate 75 and I started to accelerate, I had a feeling something was wrong. The 350 Cummins diesel engine in our Winnebago is usually quite peppy and gets up to highway speeds in no time at all. But it seemed like we were a little sluggish, enough so that I pulled onto the shoulder and went back to double check the Explorer to be sure I hadn’t forgotten to disengage the transmission and transfer case. That was all okay, so we continued north toward Ocala, where we stopped at a Pilot truck stop for fuel.

Just like I always seem to get behind the person in line at the grocery store who needs three price checks, forgot their credit card, and is out of cash, I managed to pull up to the fuel island behind a trucker who must have gone inside to have lunch or take a nap, because the trucks on either side of us fueled up, left, and new trucks moved into their spaces and fueled up, while we sat there. I had just enough room that I finally gave up and managed to sneak around the side of the trailer and into the next island when it became available. Terry had to go inside to pay, and she was back out and I was busy pumping fuel before the driver finally came strolling out and climbed into his truck, then took out his phone and proceeded to make a call, instead of pulling forward to let the next guy in line get to the pump.

Back on the highway, we left the interstate just north of Ocala, and took U.S, 27 northwest through several small towns, before eventually hooking up with US 98 westbound. While U.S. 27 was a nice divided four lane, with little traffic, 98 was a two lane road with very narrow shoulders, but there still wasn’t much traffic. We had gone a few miles when I felt a little jerk in the coach, not much, but enough that I noticed it. I have learned to be aware of the subtle difference in how my rig acts that are out of the normal, and heed them.  Pretty soon there was another little bump, almost like a small hiccup, and a yellow light flashed on and off on the dashboard quickly. So quickly that we couldn’t read it. There was absolutely no place to pull over, so we continued on, but I had an idea of what the problem might be.

My Silverleaf VMSpc engine monitoring system has a feature to read any fault codes the rig is putting out, so I checked that, and it said “Abnormal Fuel Delivery.” Okay, that confirmed what I thought, but I called my pal Greg White for his input, since Greg also has a 350 Cummins engine on a Spartan Chassis on his American Eagle. Greg never seems to get tired of me calling him whenever I have a problem with one of our computers, my RV, my toad, or just because I got lost in the bathroom and can’t find my way back out again. Well, he may get tired of it, but he still takes my calls.

As soon as I described what was happening, Greg said “You need to change your fuel filter.” Which was exactly what I thought the problem was. It’s been about 12,000 miles since our last service, and I was going to have a complete service done once we got to Arizona, but apparently I waited too long. The problem may be because I let the rig sit for a week in really cold weather with just a half tank of fuel, which can allow condensation to build up, or we may have gotten some algae in the fuel, or maybe even some bad diesel, though I always try to fill up at major truck stops. But, since the rig was running fine when we pulled into the Escapees campground a week earlier, and it was in the mid-20s there at night, I think condensation may be the culprit.

Greg is such a great guy that he got online, did some research to confirm our diagnosis, even e-mailed me photos of where his fuel filter is and instructions on how to change it and prime the new one, and never got frustrated with my several calls during the day. In fact, once we were settled in for the night, and called to let him know that we were off the road, he said it was only about 650 miles from where he is near Houston, Texas to where we are, and if we were stuck, he and Jan were up for a road trip to come help us. I assured Greg that we’d be fine, but isn’t that a heck of a good friend? And I know Greg – if I called and said “I need you” he’d be burning up the highway getting here. Thanks buddy.

With no place to pull over to check things out, Terry called Coach-Net to see if they could recommend a shop nearby, while I drove. Usually our roadside service company is pretty good, but this time around I guess they were having a bad day. The first person she spoke to didn’t seem to understand what an RV was, and kept asking for a description. It took two or three attempts before they finally got a tech to call me back, who also agreed that it was almost certainly a fuel filter after listening to me describe the problem.

Of course, finding anybody, to work on an RV, late on a Friday afternoon, on that rather isolated stretch of the Florida Panhandle, was impossible. So we limped along, the sputtering getting worse all the time. We passed through Carrabelle, where Terry managed to get a couple of pictures of the World’s Smallest Police Station. At one time, the town didn’t have an actual police station, so a cop just parked next to the phone booth, and if you needed him, you called the number and he answered. These days, Carrabelle has a real police station, but they have kept the phone booth for nostalgia’s sake. 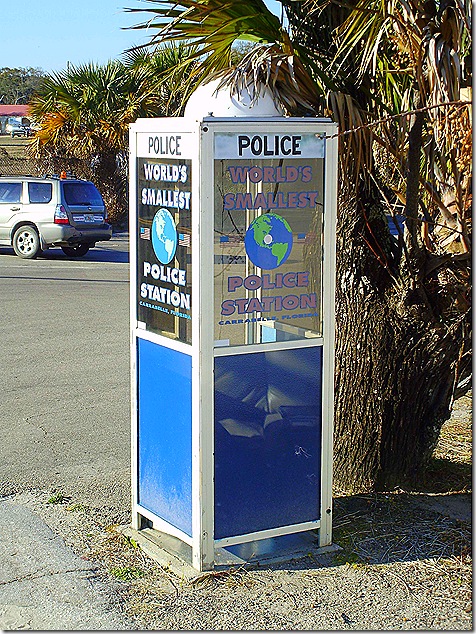 We also passed over a couple of rather tall bridges, where Miss Terry got some nice pictures of the water below. By then the rig was running so badly that I was too concerned with making it all the way to the top to be bothered with my usual fear of bridges. Hey, maybe we have discovered a cure! Just have something worse to worry about! 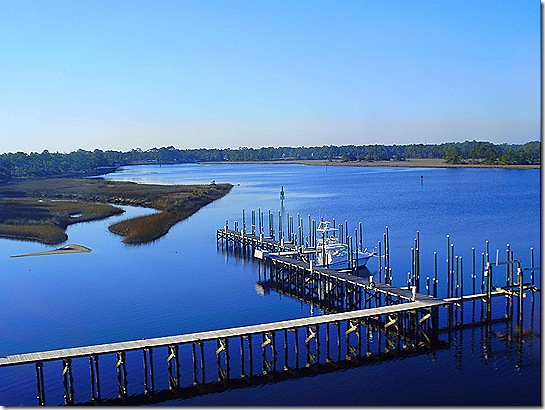 Eventually we made it into Mexico Beach, where we settled in at Rustic Sands Campground, a nice little Passport America affiliate. Today we’ll see if we can either find a fuel filter and change it ourselves, or else find a shop that can do the job for us. Hopefully, we won’t have to wait until Monday, but I don’t want to drive our rig any further until we get it taken care of.

Unfortunately, it’s just as cold here as it was in Bushnell, but at least we’re within spitting distance of the Gulf of Mexico, and the views were nice coming in.

Thought For The Day – Borrow money from pessimists – they don’t expect it back.

14 Responses to “Limping Along The Coast”